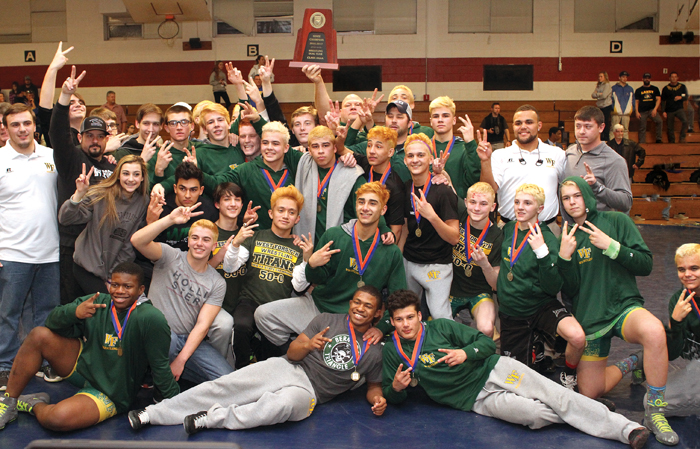 After 53 victories, a conference title and a series of narrow state tournament wins, the season-long bid to repeat as state champions came down to those four words for the West Forsyth wrestling team.

Competing in Wilmington last Saturday against Laney High School, the Titans were clinging to a six-point lead going into the final match of the day. Only a loss by pin could prevent them from claiming the 2017 dual team title.

Faced with the pressure of being the next man up, West’s Josian Fontanez calmly listened to the pre-match instructions of coach Maurice Atwood and then heeded the advice — staying off of his back while losing a hard-fought 2-0 decision that preserved the West lead.

The result — a 31-28 Titan victory — touched off a wild West celebration and sent a relieved Atwood to his knees. Had Fontanez lost by pin, the score would have been knotted at 31-31 and Laney would have been crowned champion due to a tie-breaker.

“I told Josi before the match ‘just don’t get pinned,” explained Atwood after his team extended a two-year winning streak to 104 matches. “Any other result was okay. And he did a great job. He kept it close and stayed out of trouble.” Treated to the rare occasion of being swarmed by teammates following a loss, Fontanez flashed a huge grin when asked about the key to his narrow defeat.

“Motivation – I just tried to stay alive in there,” he said afterwards. “Coach (Atwood) gave me a job to do and I was determined to go in and get it done. I would do anything for him and for this team.”

The resolve of Fontanez typified a gutsy team effort that enabled West to overcome a slow start.

Inspired by a passionate home crowd, Laney (26-2) started quickly and scored the first nine points of the match. Michael Barrera finally put West on the board with a victory at 106 but the Buccaneers immediately fought back by tacking on 10 unanswered points to take a 19-5 lead.

Ethan Hnasko, a senior who has been both a team and individual state champion, then stepped up and delivered a much-needed pin to ignite a West rally. “I am a senior and getting a pin was something I just felt like I had to do,” said Hnasko who, two days earlier, had helped West reach the state finals by notching a last-second regional win over a Davie County opponent. “I’ve been a state champion four times but this (title) was definitely the most special.”

Preston Broadus got a major decision for West in the following match and subsequent wins by teammates Jevon Boozer and Dallas Mize drew the Titans to within one point at 22-21 with four matches remaining.

That set the stage for Tyler O’Neal and Keon Muckelvene to provide the Titans with their first lead of the night.