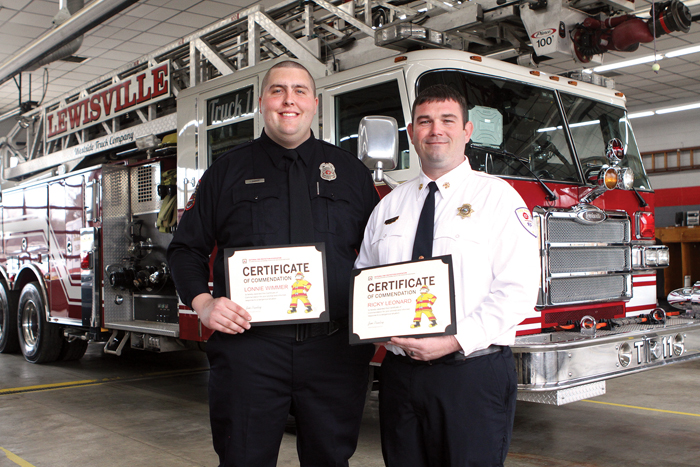 It was supposed to be a celebration — Ricky Leonard taking his wife Sheena out with friends for her 30th birthday at the Taphouse in Clemmons on Dec. 10.

Lewisville fireman Lonnie Wimmer and his wife were among the guests. They had just gotten about half way through the cake cutting when Sheena Leonard started feeling light headed.

The firemen noticed others in the restaurant acting strangely as well, complaining of dizziness and headaches.

That’s when Yadkin County fireman Ricky Leonard and Lewisville fireman Lonnie Wimmer’s training and instincts kicked in. They suspected carbon monoxide poisoning and called the Lewisville Fire Department. About 30 people in the restaurant were affected, and 14 were taken to the hospital.

On Tuesday, Leonard and Wimmer were recognized for their quick actions to protect the diners. Both received certificates from the National Fire Prevention Association in a ceremony at Lewisville Station #1. Kidde, an international maker of carbon monoxide warning devices, donated 150 alarms to Lewisville and Yadkin County in the firemen’s honor.

The problem at the restaurant was apparently a faulty heating unit.

Leonard said he was happy to receive the honor, but the safety of the diners that night was more important. “I’m more happy that we were able to save all the families from harm,” he said Tuesday. He said the public attention has been surprising.

“Yes it has been very nice. We are not heroes,” he said. “We are so glad that the attention has gone toward the safety and concern over the dangers of carbon monoxide..”

According to the Centers for Disease Control and Prevention, carbon monoxide is the leading cause of accidental poisoning deaths, and claims more than 400 lives each year. In addition, more than 20,000 people visit the emergency room and more than 4,000 are hospitalized due to accidental carbon monoxide poisoning annually. Carbon monoxide is produced anytime a fuel is burned and two-thirds of Americans use gas, wood, kerosene, or another fuel source to heat their homes – while only 50 percent have working alarms in their homes.