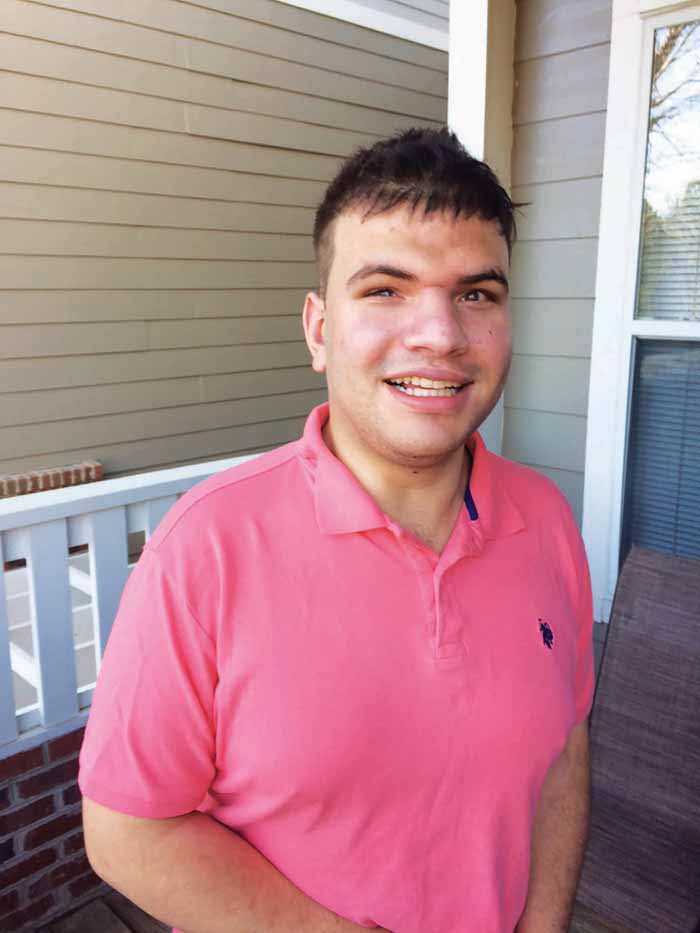 “My dreams change daily,” says Chris Palmieri. “As of right now, I am thinking I might attend School of the Arts and work on my voice. I don’t know what I will do, but one thing that jumps out at me is being a music director. But I could wake up the next day and God could have a different plan.”

If there is a different plan waiting for Chris, he will have ample talents to use. Chris knows how to play trumpet, base guitar, and has an electronic black and white piano keyboard in his living room. Just like Johnny Cash and Elvis Presley, Chris likes his church music. But he also grew up listening to the Beatles, classic rock, alternative rock and so on. While many love listening to the same type of music as Chris, few learn how to play music like Chris.

Chris is visually impaired and cannot see. Every instrument he has ever learned to play was done by listening first and replicating the sound second. He has an incredible ability to listen to the news or radio and memorize the facts and dates. In fact, any person he meets, he remembers them by the sound of their voice. By listening to the different tones and tenors, Chris identifies and memorizes better than most. “In band class in the fifth grade, I learned everything by ear. A teacher would give me a flash drive so I could hear what the piece sounded like. Then, I would listen to it over and over again until I memorized it and could play with the rest of the band.”

As a young kid growing up in a suburb of Connecticut about an hour outside of New York City, Chris made friends easily. That may be because he is gregarious, laughs often, and as is no surprise, a great listener. “I was one of those go-to people when someone had a problem. I remember my one friend being upset in second grade because she missed her parents and I would always try to make her feel better.” Chris was a source of comfort and inspiration for those around him.

In tenth grade, however, he left his high school to go to Perkins School for the Blind. There, he would be taught how to live on his own as a visually impaired person. Chris was glad to learn the necessary skills to survive, but in order to do so he had to live at the school during the week. To leave his home and friends was a tough transition for such a young kid. “One of the big things that sticks out to me is how everyone in high school had a relationship. I didn’t experience that. I had a relationship at my school but it wasn’t a real one because everyone was watching everything you do,” says Chris. “Certain things happened in my friends lives at home and I would miss out on that. I would come home on weekends, but I missed out on things.”

While he may have been missing out back home, Chris was learning some facts that would be important to his future. For instance, he found out about a North Carolina company, IFB Solution, who employed people who were visually impaired. Ironically, IFB hires those who are visually impaired to help manufacture lenses for glasses that allow veterans to see better. A representative from IFB spoke at Chris’s school and explained how they manufacture approximately 2,000 pairs of lenses everyday for clients such as the VA hospital and the U.S. Navy NEXCOM centers. Chris was intrigued and told his parents how he wanted to visit North Carolina and possibly work for this company. His Mom and Dad agreed to take a look. When they came to North Carolina to visit the facilities, they decided to make the move south.

It was a big step. Living by himself means Chris has to do everything on his own. He folds a one dollar bill a certain way, a five dollar bill another way and so on. Because he is careful this way, he is one man who knows how much money is in his wallet. Chris also likes to order takeout from Salem Kitchen because he says they have delicious home cooked meals. Chris admits, though, “At first, I just ordered a lot of pizza.” If he goes to the store, he will go to the front desk and ask for a personal shopper to help him. River Birch and Chili’s are two of his favorite restaurants with staff who have taken Chris in as family.

When Chris needs transportation, he makes use of Uber services. He simply places his desired destination through an App on his phone. It is all done with Voice Over. With the app Voice Over, anything on a website can be read out loud on his iPhone. In fact, when Chris first moved here, he was able to scan various churches to help find one he liked. Now that he has a church website he likes, he visits it often.

However, just because he can listen to messages from a church online doesn’t mean he still doesn’t enjoy the socialization and fellowship that a church can offer. Growing up as a catholic, Chris decided to attend a Catholic church in Clemmons and was eager to meet friends.

One day, an Uber driver suggested St. Leo’s Catholic Church in Winston-Salem. “The masses were at the same time as my church up north. I believe it was a deeper call from God. God wanted me to go there.” Chris said the first Sunday he instantly felt at home. Interestingly enough, the first person Chris met was music director, Terry Hicks. The first thing Terry asked Chris was whether he wanted to join the choir. “It was very emotional. It was overwhelming in a way. I was still kind of shocked I was asked. Honestly, I was not going to ask to join the choir. I had no courage to ever ask again. Had Terry not asked, I probably never would have asked. Father Brian Cook, said he would work with me, too.”

Chris has come into contact with many people who have helped him along the way, “Ralph, Mary, and Jim,” Chris notes. Jim Lentz is Chris’s sponsor for RCI, Right of Christian Initiation. Every Monday, Chris and Jim attend a meeting with about twenty other sponsors and twenty other candidates. They learn about the faith of the catholic church. “I appreciate what I have learned about the catholic faith and wouldn’t change that for anything.”

The fact that Jim is Chris’s sponsor is not actually too much of a surprise. Jim was hoping to be the sponsor of someone special. He was put with Chris and the two have formed an instant friendship. Chris likes to text Jim each week. Chris smiles and says, “I will look up on the church’s website which mass Father Cook will be speaking at and will text Jim the times since I know Jim and Father Cook are friends.” Although Jim is very involved in the church and many of its activities, he admits he didn’t know the website offered the specific times each pastor would speak. “They post it on Thursday,” Chris says knowingly. “Jim and his wife, Deanne, will pick me up, take me to church and bring me home.”

While church is a safe haven, Chris admits he can only go to a handful of locations on his own. “There are certain places I am not going to go by myself — a mall, plus I don’t really like to shop anyway. As a visually impaired person, you have to be careful and mindful, especially if you are going out alone because people will take advantage of you.”

It is easy to appreciate how his parents might worry. Beyond that, it is also understandable how they might miss their son as he makes his way in the world. Chris says about his phone calls with his mother, “She always tells me she misses me about a million times.” Who can blame her? Our neighbor’s daily courage and interest in meeting the world’s challenges is inspiring. In fact, his ability to find and embrace the things that will enrich his life, could come in part, because he instinctively knew what Plato said so aptly many centuries ago about music. On that subject, Plato said, “Music is a moral law. It gives soul to the universe, wings to the mind, flight to the imagination, and charm and gaiety to life and to everything.” We should all be so lucky to find those qualities in life when we are faced with our challenges.