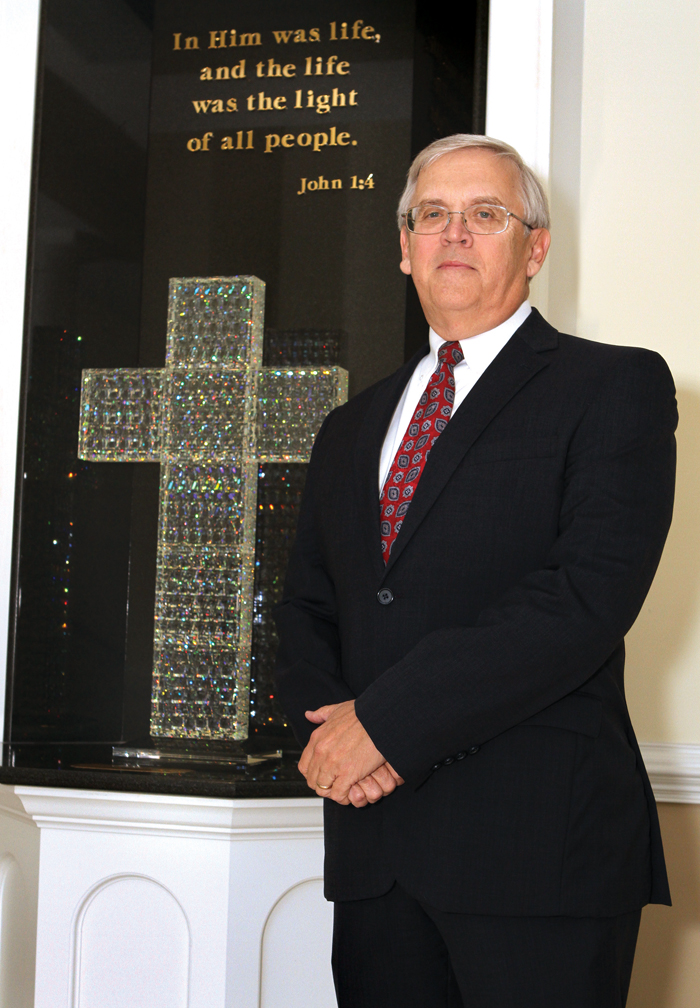 The Rev. Ray Burke is retiring as pastor of Clemmons Moravian Church. His final Sunday service will be held Feb. 26. The church will host a reception that afternoon.

Ray Burke was a middle schooler living in Kernersville when he first felt drawn to the ministry. The minister at his own church, the Rev. Kenneth Ball, someone Burke looked up to and admired, had passed away.

“He was probably the most dynamic preacher I’ve ever known,” Burke said, “He made the Gospel come alive for all of us. He was very involved with the youth fellowship and provided us with a good example of what it truly meant to be a Christian. He also stood up and spoke up for what was right, even in the face of disagreement and conflict.”

But since he was 12 or 13 years old at the time, there were more immediate demands, like high school, then college and even the Army. The day he earned his diploma with a degree in history from Appalachian State University, he also received his North Carolina Teaching Certificate and a Commission into the Army.

Burke was assigned to Counter Intelligence and his home base was Fort Bragg. This was toward the end of the Vietnam War and he was awaiting deployment when in 1973, the U.S. stopped sending troops. In 1974 he left active duty, but remained in the reserves. “It was while I was still at Fort Bragg after the war that the idea of the ministry came back,” he said. “A second calling, I guess you’d say. It was as if God was asking what was taking me so long. He’d first called 12 years earlier.”

That’s when he headed to Bethlehem, PA, and the Moravian Theological Seminary.

While in seminary, he remained on inactive reserve and once he’d completed his training and was ordained, the Army transferred him from Counter Intelligence to the Chaplain Corps. “From there I was sent to Winston-Salem in 1977 and served as associate pastor of New Philadelphia Moravian Church.” He later became senior pastor of the church. “In 1981 I went back on active duty as a chaplain and was assigned to Fort Hood in Texas.”

“It was never my intention to be a minister,” Burke noted. “I thought I would be a career Army officer, but the spirit moved and the second time I answered the call.” After two years as an Army chaplain, Burke left the military to become pastor at Konnoak Hills Moravian Church in Winston-Salem. He was there for 15 years before accepting the call to take on the role of pastor for Clemmons Moravian Church.

He will have been in Clemmons for almost 20 years when he steps away from church leadership and into retirement at the end of February. Burke said while excited about retirement and the opportunities to pursue hobbies and other interests, he will miss it.

“I expect I will be filling in at various churches around the community in the future, but I will take some time off before doing that.” Those hobbies include working with stained glass, woodworking, photography, and travel. With 40 years in the ministry behind him. Burke said he’s seen a number of changes in his work over the years. “One big thing is simply technology. Another is what is expected of a pastor.”

When he began his professional career, Burke said pastors did a lot of home visiting, calling on people, checking in with them. “Now they don’t really want that. They aren’t looking for the pastor to turn up unexpectedly for a visit.” He said that changes if there is an illness or a death, but for the most part, younger people don’t expect to see the pastor at the front door inviting them to church.

“Older members may, but that’s changed for others.” He said some of it is related to security concerns. “People are just not as comfortable with strangers showing up at their homes.” He also mentioned the challenges of filling the pews. “The membership rolls at a church may be fairly healthy, but that doesn’t translate to people actually in the pew on a Sunday morning. There’s too much competition now. When I drive across the Yadkin River on my way to the church on a Sunday morning, I see soccer fields filled with hundreds of people. When I was growing up there were Blue Laws and stores were closed on Sundays. Now it’s business as usual.”

He said the challenge for church leaders is to schedule events around all of these other activities. Another challenge for a pastor is preparing a weekly sermon. “That’s a big one. Coming up with what to say and make it interesting … relating the Gospel to everyday life.”

He said his ideas may be rooted in ancient scripture, but he tries to find a way to relate it to the life and experiences of the congregation. While debate over church and state seem especially mainstream today, Burke said he believes it is a mistake for a minister to become political.

“I steer way from that. I don’t think religions and politics work together very well. I can address the world situation without getting into politics.” Burke said his role has continued throughout the years to be that of sharing the Gospel and attempting to meet the spiritual needs of his congregation.

“I grew up in the Moravian Church and I love the traditions. The Christmas Eve Lovefeast is always special, but I guess my favorite is Easter and Holy Week. Some call it the Moravian marathon,” he said laughing. “There are readings every night of the week before Easter, a Good Friday service and then the Easter morning service.” During these two seasons, Christmas and Easter, local congregations often draw from the entire community as many people consider the Lovefeast and Sunrise service a wonderful tradition.

“A lot of people who move to this area aren’t familiar with the Moravian church,” Burke said. “We’re largely on the east coast, and of course in other parts of the world because of our emphasis on mission work. In fact, we talk about the Moravian church, but that’s actually a nickname given to the settlers who fled from Moravia in 1722 due to religious persecution.

The official name of church — Unitas Fratrum in Latin, means Unity of the Brethren.”

So what will he miss the most about his role as pastor of Clemmons Moravian Church?

“The people. You make wonderful friends over the years and that’s something very special.” He said most retiring pastors are told to stay away from their old church for at least a year while the search for a new minister gets underway and that individual has a chance to transition into the job.

“There was an interim pastor here after the late Burton Rights retired and I took over, and there will be one this time too,” he said. While there were 12 years between his first and second callings to the ministry, there are many in the Clemmons Moravian congregation, past and present, as well as in the community who are grateful he did answer that second time around.

‘Poor Peter’ book given to library