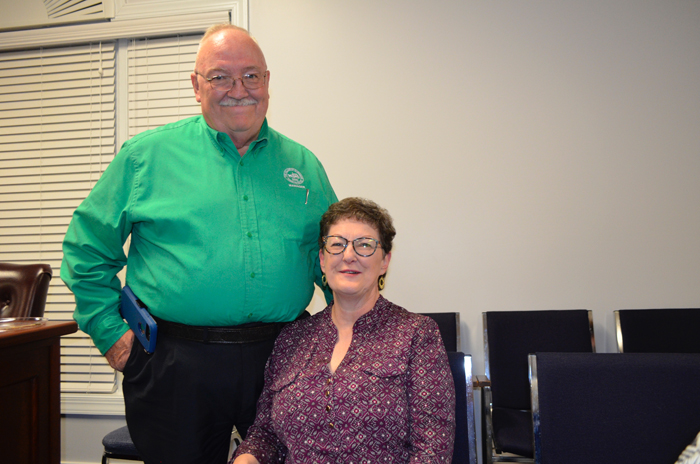 Kirby, who is wrapping up his 28-year career with the town – including his last two years as Village Manager – was getting a head start on his upcoming retirement by making the rounds to see all 13 of his grandchildren (nine girls and four boys) and then on to Tennessee to see his mother and sister for Valentine’s Day.

The original plan was to visit the grandchildren in Summerfield and Shelby on Valentine’s Day, but scheduling for all those involved didn’t work out. So he had to change his schedule to see the grandkids (ages 7 months to 19 years) on Sunday and Monday. Son Larry Wayne, who has one boy and three girls, lives in Summerfield, and daughter Laura, who has three boys and six girls, is in Shelby.

Any particular presents for Valentine’s Day? “Yes, a lot of chocolate,” Larry said. “They love grandmother and me, so I think some would say that’s a gift.”

After lovin’ on the grandkids, it’s was on to Tennessee for more family time.

Larry is a native of Sevierville, Tenn., was raised on a farm in eastern Tennessee and went to school with Dolly Parton. “She was shy. Her mom and dad were pretty poor,” he said.

His last official day is next Friday, but Larry still had some additional time to take off before leaving Village Hall. That explains him not being there for Monday night’s meeting, which would have been his last official council meeting, but he will return for the Feb. 27 meeting – “volunteering to work that one” – since his successor, Scott Buffkin, doesn’t come on board until March 1.

That’s typical Larry – giving back to the Village the weekend after he officially retires.

One of my favorite stories I have done at the Courier was a feature in 2011 on Larry, who was then Public Works Director. Gary Looper, his boss at the time and the man he ultimately replaced in 2015, had this to say at the time about Larry. “He literally works 12-hour days and figuratively works 24 hours a day,” Looper said. “He is always available and on-call for requests from NCDOT, emergency responders, utility providers and the Sheriff’s Department for assistance whenever a need presents itself.”

Around that time, a new phone system was implemented at Town Hall, where if someone couldn’t answer the phone after a few rings, it went to voice mail. Not so at the Public Works facility, which is located a few miles away just off Idols Road.

“When you call down here, we don’t do that yet,” Larry said at the time. “I’m still from the old-school theory that when you call the local government, you’re going to talk to one of my employees. We’re going to do our best to answer your question. People don’t want to hear all this electronic stuff and excuses. They just want the answer to their question.”

And if there was no answer?

“It will automatically roll over to my phone, and if I don’t pick it up, it goes to my cell phone,” he said. “If you call after hours and press 1, it will ring my cell phone, and I will answer it.”

You gotta love that approach. That’s just the way the man operates. Larry would say he might have rubbed some people wrong at times because he has policies and rules he has to follow, but he does the town’s business with no apologies. He is a straight-shooter who always seeks the most efficient ways to do business – what some would call a common-sense approach. He has done that since he came to work in Clemmons, first on a part-time basis in 1987 to help take care of maintenance before becoming full time in 1989.

At the time of my feature story on Larry, he was targeting the end of 2013 to retire, but he said he was willing to leave earlier or later, if his health was still good, depending on the desire of his boss.

“If I retire, if they need something, all they have to do is call,” he said.

It just took a little longer than expected, but that time has finally arrived in 2017. Now, he’s set to retire on Feb. 24 and come right back as a “volunteer” running the Feb. 27 meeting.

There’s never been a more dedicated individual to the Village than Larry Kirby. Here’s wishing him all the best in retirement.

The Village of Clemmons will hold a celebration to honor Larry Kirby’s 28 years of service on Monday, Feb. 27, at 7 p.m. at the Village Hall, 3715 Clemmons Road.