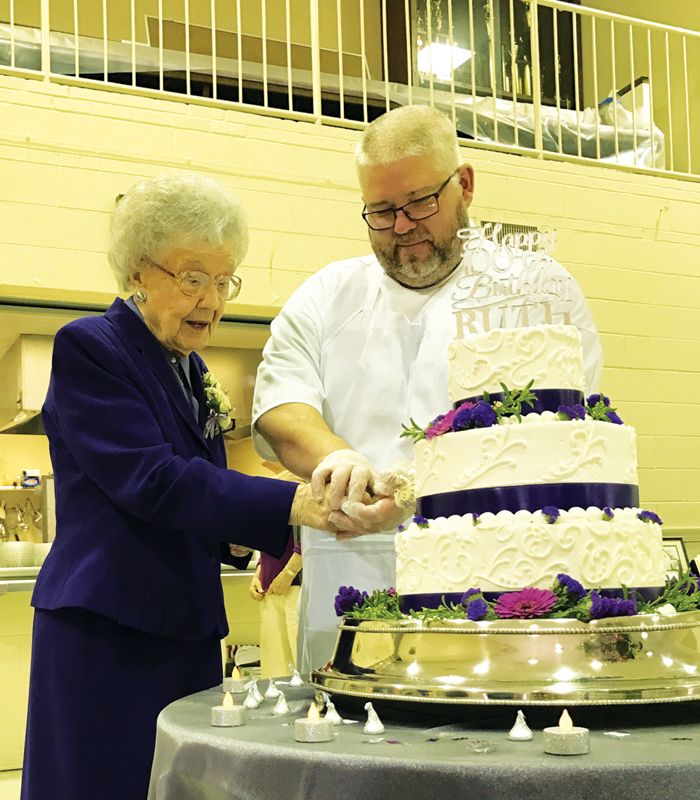 What is it like to become a century old? Just ask Ruth Spach. She just turned 100 and had the birthday of the century. Guests gathered at Pine Grove United Methodist Church, where Ruth has been a member for 100 years.

In addition to her long commitment to the church, she is also known to be the first person to introduce herself to a new member at the church. As she stood in line greeting folks, smiling the entire time, the centenarian seemed to be more like a spry seventy-year-old than some who was celebrating her birthday for the 100th time. Many friends and family from the community as well as from out of town were on hand to enjoy her special birthday bash where the number 100 was sprinkled everywhere.

There was a balloon with the number 100 emblazoned on it, banners with Ruth’s name and the number 100 — even Hershey kisses with wrappers that read, “Happy 100th Birthday Ruth!” The gregarious Ruth was full of smiles on her birthday and tried to put into words what the celebration with its attendees meant to her. “You just can’t imagine. You can’t express,” she said with eyes that gleamed her delight.

Ruth’s friend, Margaret McLeod adds, “ I’ve known Ruth all these years. It’s just wonderful that anyone can live to be 100. She just loves life.” Shannon Preston is Ruth’s grandaughter and says, “It’s an honor to celebrate her life and to see the impact on her family, church, and community over 100 years.”

In order to appreciate what Ruth’s life has included, some of her memorabilia was on display. Collages of photos were scattered throughout the room. There was table after table of antiques that served as tangible reflections of Ruth’s life experiences, and to some degree, our own community.

For example, there were the original needles Ruth used as she sewed underwear while working at Hanes, as well as an array of awards and certificates. It was like taking a walk through history as it unfolded, leading right to the present. Ruth’s high school diploma from Clemmons High School in 1933 was also set out, along with one of Ruth’s report cards. Ruth was a stellar student at Clemmons High School, except in one area. She was given less than high marks for discipline.

It appears our neighbor got herself into trouble because of her penchant for chatting or laughing with one student or another. However, could it be that her outgoing personality would serve her well — could it be why Ruth is the oldest surviving student from Clemmons High School? Perhaps it could also be attributed to her independence. Ruth still lives at home on her own.

Her neighbor, Burlee Jones checks on her daily. Burlee says, “It’s an honor to know her. I didn’t know her until 1982. She’s a very good friend. I help her when she lets me,” Burlee smiles. “She’s very independent. We go out to eat daily. She likes to eat out.” What an honor it was for many of those in attendance of Ruth’s party as well. After all, how many people can say they have been to a party in honor of someone who has 100 years of experience in our community?

As for her secret to a long, healthy life, Ruth says if asked about it, “I don’t know. I really don’t know. I love life. I love people.” It may comfort some to know, that some of the good things (and people) never change.