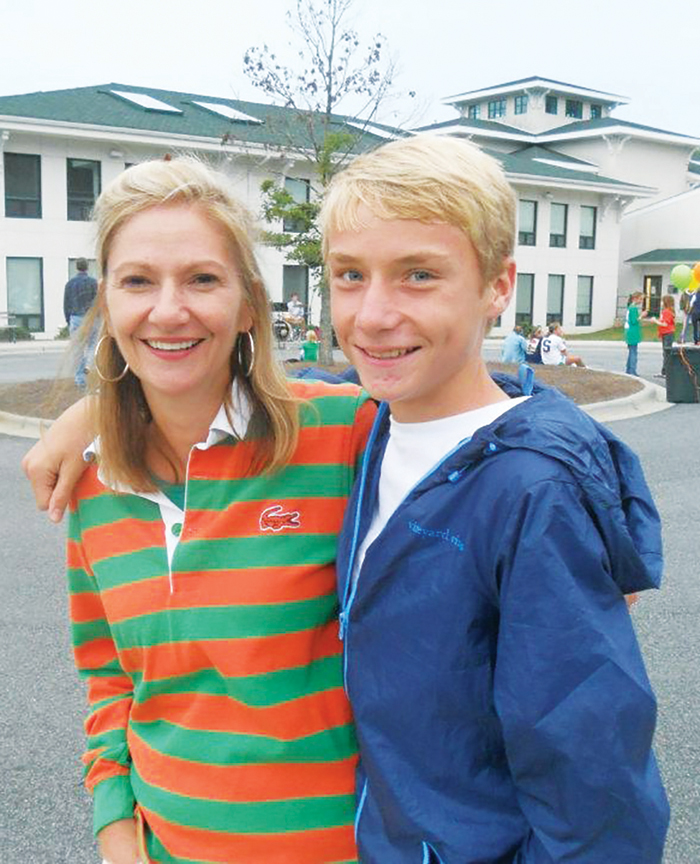 Julie Smith, above, with her son, David.

Growing up in the Dick and Jane era, Julie Smith was used to seeing pictures of little Jane skipping down the sidewalk and green grass growing on each lawn. Dick’s father wore slacks as the two played ball in the backyard. The loving mother, wearing heels with no stains on her nicely pressed dress, watched dotingly. Julie Smith, who grew up in New Orleans, Louisiana, recalls the feeling she had while learning to read the Dick and Jane series. “There was this iconic picture and I remember wondering, ‘Where do people like this live?’ They must be up in Minnesota or some other state because New Orleans is nothing like this.”

Young Julie had a much different upbringing than Dick and Jane. She grew up going to the French Quarter with her grandmother and eating at eclectic restaurants peppered throughout New Orleans with its rich European history. Julie’s grandparents were from a small German town outside of New Orleans called Gretna. Her grandfather was a general doctor and her grandmother assisted him with everything, from x-rays, paperwork, to any other duties required. Julie’s mother went to public school but was soon sent to a private all-girls school known as McGehee’s. “They wanted her to have a challenging, broadening experience,” says Julie. “Education was very important.”

McGehee’s is located in the Garden District of New Orleans. Louise S. McGehee opened the school in 1912 and continued to grow the school to enhance the education of each budding young woman. Julie’s mother fell in love with the school and eventually became an educator herself.

To no surprise, Julie would also attend McGehee’s. “I grew up under the label, ‘faculty kid.’ Under that label, you are subtly on the inside track. You see your parents inside school and out. My mom was signing report cards, having faculty over for dinner–when we would go on vacation we were always stopping and looking at colleges on vacations. It sets a tone. We are always imprinting on our kids.”

Julie soon began to teach, just like her mother. In 8th grade, she went down to the junior kindergarten classes and assisted the teachers. “Because they were on the campus, I could work with four year olds. I started working at after school programs and camps. I was doing my biology papers on gifted children and began working at a Montessori school. By the time I was a senior, I wanted to work with Montessori schools.”

For Julie, pursuing her dreams in education meant leaving New Orleans and attending school at Furman University. “There is a rubber band theory with women and New Orleans. You can only go so far until you are snapped back.” Julie intended to go to school and return to her home state, but soon found herself in love and engaged. So she stayed in North Carolina. Her choice to stay in North Carolina ended up being a great place of refuge for her mother during the horrific storm, Katrina. “Katrina sent my mother to live in Winston part-time. I think my husband and I think of ourselves as half residents of New Orleans. We will split a lot of time between the two states.”

Back in the Tarheel state and as a young professional, Julie was determined to be the best teacher at the new Julie Smith Julie Smith, above, with her son, David. Below, she directs students at Summit School. Montessori school where she was working. However, Julie soon found teaching was more difficult than she anticipated. “I was struggling and asked if I could teach half a day in order to go back to school for counseling. I finished my masters in family and childhood development.” Receiving her masters at University of North Carolina Charlotte would prove to be a useful tool in the near future. But first, she began to have children of her own as her husband went to medical school.

After their third child, Julie looked around her environment and had an epiphany. “I hatched the idea of starting a school in my basement called, Salem Montessori. I thought, ‘I am barely surviving with my husband always at the hospital and three little kids.’ The basement was just an exemplar of what was possible.” Julie called up five of her friends and began a co-op among the other mothers and their children. The school began to grow and eventually grew its resting roots at Home Moravian in Old Salem, where it still resides today.

Summit School quickly saw the benefits Julie brought to an educational environment and asked her to come work there. “When my youngest was in first grade, I was asked to teach junior kindergarten at Summit for one year. I wanted something new and to grow as an educator. I am restless by nature. It was just for a year and felt risk free.” After three years of teaching junior kindergarten at Summit, Julie went back to Salem Montessori. “I didn’t seem to be a woman to balance full-time work and three kids well,” Julie laughs. “Montessori offered me part-time hours.” It was at Montessori where Julie started writing a lot of parenting classes — counseling parents on raising independent children with respect for the child at each stage of their life. After four years at Salem Montessori, Julie was asked to come back to Summit. She accepted.

At Summit, her children were faculty children, just as she had been. Instead of being an English teacher as her mother had been, Julie became Director of the Lower School and began counseling parents through seminars and workshops she created based off books and personal experience. “I am very wired toward higher philosophical work. I feel like schools are an important engine, but I have done work with at-risk and poverty kids. Schools are better when parents are fully engaged. I felt like I can quadruple my impact by offering tools and supporting families and their role at home. It doesn’t interest me to just show up for a seven-hour block and then go home.”

Julie often holds seminars during early morning hours, during lunch, or after 5:00. Having raised three children, started a school of her own, and having spent time around educators her entire life, assisting parents is something Julie adores. “For some people, parenting becomes a big tool for self awareness, transformations, and personal growth. When I can support a parent, I feel like I am helping society. Not every parent is as focused. But when I can get in involved in any way, that just thrills me.”

Julie says the advice she will sometimes give to parents is two-fold. “Be open to the self awareness that leads to personal change as a person. Be willing to really listen to the world around you and be open to what that change might be. I see so much fear in parents and I think if we could listen more and be less afraid, we would be better mentors for our children.” Julie says her best mentor was her mother. So it is no surprise our neighbor is using what she has learned from her own mother, from her own education, and her own parenting experiences to help other parents achieve their goals. Is it not great to see such quality neighbors not only being handed down from generation to generation, but shared in the community as well?