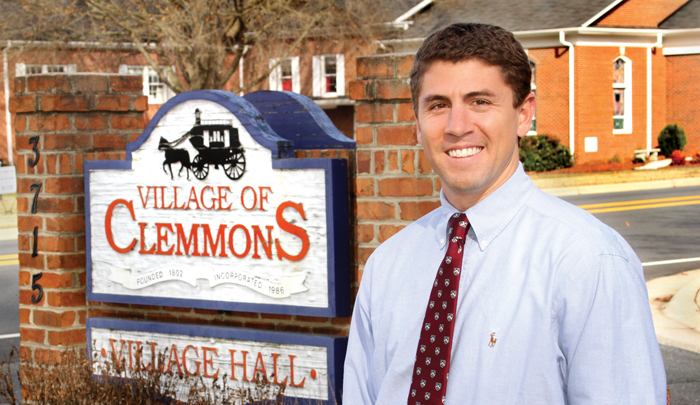 In a jolt to Clemmons politics, two-term Mayor Nick Nelson announced Monday that he will not seek re-election this fall.

Citing business and family demands, Nelson said he wanted to make the announcement now to clear any uncertainty about his plans. Filing begins in July for mayor and three village council seats.

Nelson’s difficult juggling act as he balanced the professional, political and personal sides of his life had become obvious. He missed many of the private interviews as the council searched for a new town manager recently.

“I’ve got a lot going on professionally and personally,” he said.

An untested newcomer, Nelson won a seat on the village council in 2011 against a slate of incumbents. Two years later he defeated Mayor John Bost. He ran unopposed in 2015, and Nelson has been prominently mentioned for political offices beyond Clemmons in Raleigh and even Washington.

With youth, charm and Republican conservative credentials, he has been on the radar of GOP insiders. Nelson said Monday politics may yet be in his future, but not immediately.

In a letter, Nelson wrote: “As many of you know, I have served the Village of Clemmons in elective office for the past six years. I started as a councilman and with your support, I was given the privilege these last several years to serve as your mayor. It has been more exhilarating and rewarding than I could have ever imagined.

“The first campaign promise I made was to bring new ideas to our continued problems. While I know I could continue to bring different solutions to the issues in Clemmons, I believe it is equally important for local boards to see turnover. Bringing with it new approaches, ideas, and fresh faces to work for the citizens of the community.

“Since my first election, I have experienced many life milestones, including starting a family and becoming a business owner. I have enjoyed and look forward to growing both my family and family owned business in this community.

“Therefore with this letter, I am officially announcing I will not be running again as your mayor this November. I want to sincerely thank you for allowing me the opportunity to serve in this position. The Village of Clemmons will continue to see me passionately engage as mayor for the remainder of my term, and continue as a citizen. Most importantly, I look forward to continuing to be a part of this community with my family.”

Nelson said he now applies his standard of political change to himself.

“I really believe, more so now than ever, that it’s important to have turn-over in government. To see fresh faces. It’s important to take a step back and let others participate. “I think I will be involved in politics in the future — if not politics, then other projects in the community.”

He was a bachelor when first elected. Six years later, he’s a husband and father of a 2-year-old daughter, Kate.

“To be able to serve as mayor of your community is awesome. I got to do a lot of fun stuff,” he said. Even the not-so-fun stuff, he said, was rewarding.

He said he takes away a different perspective about the challenges of serving in political office. “I’ve learned patience. Patience with myself and patience with others. You take the wins and let go of the losses,” he said.

Councilman Mike Rogers was elected to the council with Nelson. “It has been a pleasure to work with Nick and his enthusiasm of service will be missed. However, being a young, energetic, and intelligent individual he will surely be successful in his future endeavors. I wish him well in his life’s pursuits and will have fond memories of our six years serving our citizens,” he said.

Former mayor Nat Swanson was a mentor and political supporter for Nelson. He said on Tuesday, “Nick is a gentleman and one of the few council members who listens to the people of Clemmons. We are losing a valuable asset.” Council member Mary Cameron said, “I always appreciate people who are willing to step up and serve their community. I wish him well in whatever he decides to do next.”