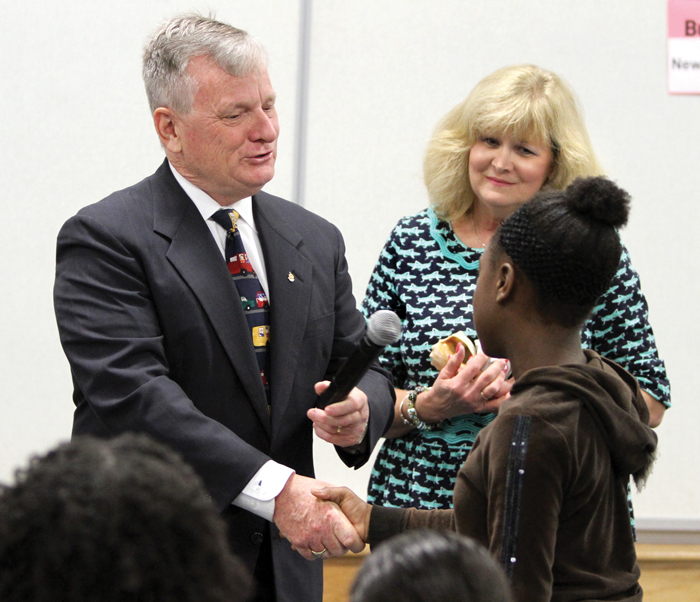 When N.C. State Treasurer Dale Folwell visited with fourth-graders at Ward Elementary Monday morning, he did indeed talk about money.

Before he was done, fourth-graders knew that the state treasurer is responsible for managing $100 billion, much of it in the state retirement and health plans. Students learned that’s about five times as much as the annual state budget.

They learned that he thinks that ability and passion are important but that they are not enough. You also need integrity. If you people meet people without integrity, he said, “I don’t want you to walk away from those people; I want you to run.”

“Don’t let anyone in your life tell you what you cannot do,” Folwell said.

He also offered tips on the right way to shake someone’s hand – look them in the eye and give a firm shake. For that, he invited student Shamariya Hentz up for a demonstration.

After his talk was done, a number of other students wanted to shake his hand, too. They lined up, and, one by one, he looked them in the eye and gave them a solid shake.

All in all, it was a great experience, students said. “It was cool,” said Nathan Vance. Spelling out the word “amazing,”

Meara Haggerty and Kayla Hernandez were also among those who talked about some of the things they had gotten out of it.

It was just the experience for students that teacher Robin Harden was looking for when she invited Folwell to come to Ward.

Harden met Folwell several years ago when she and other members of the Forsyth County Association of Educators went to Raleigh and met with legislators, including Folwell who was then serving in the N.C. House of Representatives. The group from Forsyth County had young people with them, and Harden was thoroughly impressed by the time and attention that Folwell gave to each of the young people. “He was so, so kind to the children,” she said. “I remember his time, his patience.”

As part of the fourth-grade curriculum, students study North Carolina history, and Harden thought it would be nice to invite Fowell to come talk with Ward fourth-graders about some of the financial aspects of North Carolina. “I got the nicest letter back saying he would come,” Harden said.

Harden joined the staff at Ward 17 years ago when the school first opened. Her earlier years as a teacher include time at such schools as Rural Hall Elementary. As they studied North Carolina in the days before Fowell’s visit, students have explored such topics as early settlers’ interactions with the Native Americans, the pressure to trade with pirates even though the items were stolen because pirates’ goods were cheaper, the years of slavery, the Civil War and the days of poor people working as tenant farmers.

Before it was time for Folwell’s visit, several students in her class talked about Harden, what they like about school and history, and their thoughts for the future. “She is really fun,” said Miranda Serviss. “She gives out good work. She is super nice to us.” Miranda is thinking about becoming an engineer one day. “My dad – he is an engineer,” she said. “He is my person to look up to. I want to be like him.”

Aubrey Tesh wants to be the first woman elected President of the United States. As it happened, this morning she was wearing a shirt that said “Future President.” Aubrey likes the way that Harden teaches writing, a subject that Aubrey enjoys. “It’s another way to express your feelings,” she said.

Ashton Noah likes learning in general, and, later, when Folwell was taking questions, he asked Folwell the name of his opponent in the state treasurer race. So far in North Carolina history, Gabriel Vargas, who later gave Folwell’s visit the “a-m-a-z-i-n-g” rating, has particularly enjoyed learning about the pirate Blackbeard’s connection with the North Carolina’s history. He really likes having Harden as a teacher. “It’s a very learning atmosphere,” he said.

Nick Ingram has found it satisfying to learn more about the role of African-American’s in the state’s history. When he grows up, he hopes to become a professional basketball player. He plan to focus his energy on far more than that, though. He wants to help find affordable housing for people who might otherwise have difficulty finding a place of their own.

“It’s nice to help other people,” Nick said. Nathan Vance has already gotten a good start on his plans to become a profession actor. He is participating in Ward’s coming production of The Bold Buccaneers. He later asked Folwell how he decided to run for state treasurer. The answer was learning that the woman who had held the job for eight years wasn’t planning to run again.

Ezekiel Green has liked learning more about the Cherokee Indians. He has some American Indian ancestors himself. “It means some of my ancestors have been around for a really long time,” Ezekiel said. Ezekiel wants to become a professional singer/rapper one day who focuses on songs with positive messages. He has already written a rap about the dangers of putting too much emphasis on money.

Martin Suarez has enjoyed learning about railroads and other forms of transportation, and he once rode a train through the Great Smoky Mountains. Martin likes to keep learning after he goes home from school, and he has been learning more about medicine with an eye on becoming a doctor one day so he can help people.

Harden’s husband, Glenn, enjoys working with Harden’s students when he can, and he had come in this morning to help get everything ready for Folwell’s visit. He and his wife enjoy nothing more than gathering seashells at such places as Cape Lookout, and, as a thank-you for Folwell, he had brought along two shells from knobbed welks, which, in case you didn’t already know, are large sea snails.

Fowell lives in Winston-Salem, and he stopped off at Ward before heading to Raleigh where he was speaking at another event later in the day. In speaking with the Ward students, he soon revealed a low-key sense of humor. “People my age try to confuse people your age,” he said as he explained one aspect of state finances. In talking about being a Winston-Salem/Forsyth County student himself when he was growing up, he said he had gone to Speas Elementary in the ‘60s – “not the 1860s, the 1960s,” he said. If they gleaned nothing more from the morning, he said, they should go home with the intention of going to www.nctreasurer.com and searching for unclaimed money or property.

When telling their parent about it, he suggested making sure that they agree to give them 10 percent as a finder’s fee. (More than one student later said he thought 10 percent was a little low. One boy said he was going to shoot for an 85 percent finder’s fee.)

When Folwell was taking questions, Harden made a point of letting everyone know how much she had appreciated how Folwell had treated everyone during her earlier visit to Raleigh. With that in mind, she said, “Do you think treating others with respect had to do with your success?” Yes, he said. It was clear what kind of experience she had wanted for the young people that day, and he was happy to do what he could to provide it. “You can get a lot out of life if you help others get what they want out of life,” Folwell said.