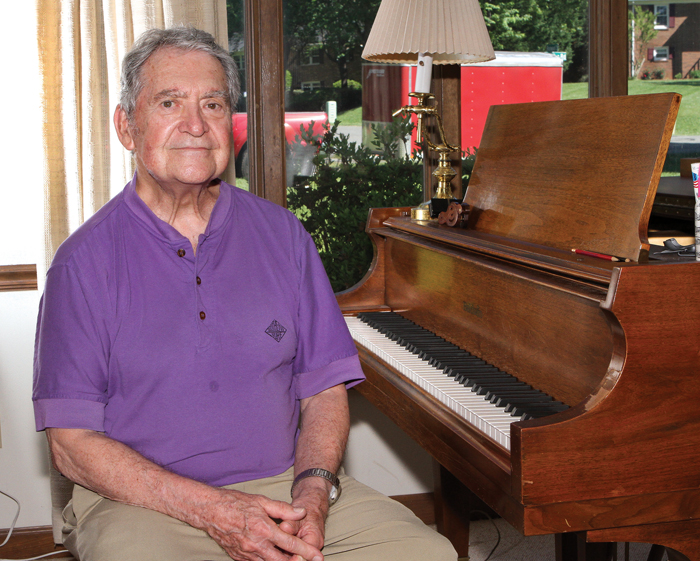 James Basta describes his years at a member of the U.S. Marine Band that performed at the White House. The small picture shows him playing the organ. He has led the Salem Community Orchestra for 33 years and will lead his final concert on Saturday. — Photo by Chris Mackie

He was a musician for the presidents — Eisenhower, Kennedy, Johnson, Nixon and Carter — as first horn in the U.S. Marine Band at the White House. He marched and played with the band during the funeral procession for President Kennedy.

He played the organ for President Nixon and evangelist Billy Graham for a Sunday morning service.

He recalls driving his tiny Fiat up to the front door of the White House only to have it drip oil on the portico.

James Basta, 83, of Clemmons, the unassuming master musician who later directed the Moravian Easter Sunrise service for decades, is about to step aside from his retirement gig as director of the Salem Community Orchestra.

The volunteer orchestra’s annual spring concert, “Romantic Reminiscence,” featuring Olesya Dashkevych in three violin solos, will be performed in the Hanes Auditorium of the Fine Arts Center of Salem College on Saturday, May 6 at 8 p.m. This will be Basta’s farewell and final concert for an orchestra he started 33 years ago. All the concerts are free.

The orchestra includes about 25 musicians, strings and brass and woodwinds.

Most of the participants are eager to keep their musical skills sharp. They include doctors, veterinarians, family members, ministers, church members and others who love music.

“It’s mostly like a recreational orchestra,” Basta said. “For a volunteer group, they really play like professionals.” They perform eight or nine times a year, usually at Salem College and at Unity Moravian Church in Lewisville, Basta’s home church.

Basta and his wife, Elizabeth, both natives of Milwaukee, Wisc., have made the orchestra an important part of their lives. They have a pickup and small trailer to pack their equipment for the concerts. She is in charge of decorating.

The orchestra will continue.

Another Clemmons musician, Peter Perret, former director of the Winston-Salem Symphony, will assume the baton. Perret has been playing oboe for the orchestra.

Basta said it’s time for his retirement. Macular degeneration has claimed one eye. The other has a cataract that makes the music fuzzy. “I don’t feel like I’m on top of my game,” he said. He gave up his horn years ago for fear playing it would affect the pressure in his eyes and damage them further.

At a reporter’s urging, he took his beloved horn out of the case for the first time in decades to pose for a picture. He couldn’t resist the urge to play a few impressive tunes. That brought a concerned Elizabeth scurrying in to remind him not to over do it.

“That was my bread and butter,” he said of the horn that still emitted a rich tone.

He is a graduate of Eastman School of Music and earned the title of first horn for the United States Marine Band. He retired after 20 years with the rank of master gunnery sergeant without ever firing a weapon. But he played his horn a lot.

When threats of violence against President Nixon made him abandon attending public church services, Basta played the organ for Sunday morning services at the White House, once attended by evangelist Billy Graham.

He was part of the band that played for the reception of Nixon daughter Trisha’s wedding at the White House.

He and Elizabeth were both at the White House on the Sunday morning when the Washington Post broke the Watergate scandal story. They saw White House chief of staff Bob Haldeman running up and down the hallway and knew something was amiss. Performances were greatly curtailed at the White House during the following months.

He retired during the Carter administration and applied for an opening at director of music of Home Moravian Church in Winston-Salem in 1982.

For years following that he directed the Easter Sunrise services at Old Salem and God’s Acre.

A baby grand in his Clemmons West living room still commands his musical attention. A cup of pencils sits atop the piano ready for him to jot notes. Basta composed, “Concereto for Marimba and Orchestra,” that has been played globally. He acknowledges that classical music is not popular these days. “That’s changing times,” he said.