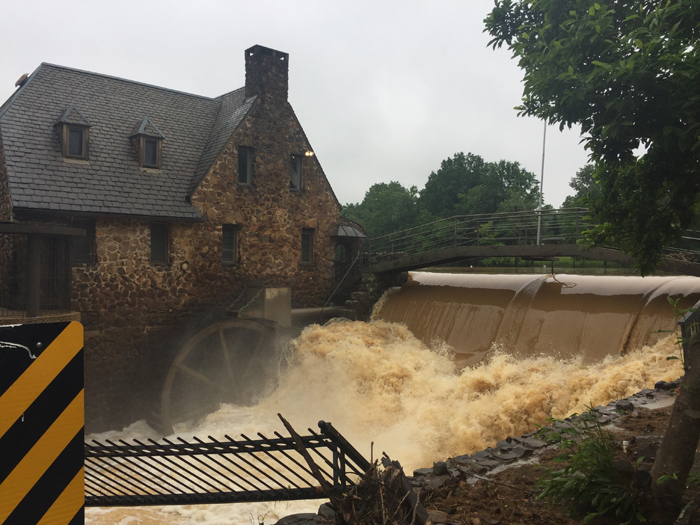 Muddy floodwaters cascaded over the dam at the old Lasater Mill on Tuesday morning after a nighttime storm.

An overnight storm dumped five inches of rain on Clemmons and threatened the historic Lasater Mill on Tuesday morning. Crews closed the road in fear of the old dam giving way.

Lasater Lake neighbors gathered to watch as cascading muddy waters turned the dam into a small Niagara, complete with spraying mists. A kayak and a couple of unsecured john boats skipped over the dam, and two runaway piers floated down from up the lake and lodged near the dam.

Clemmons fire chief Jerry Brooks at the scene said the road was closed as a precaution in case the dam gave way. If the dam failed, the bridge would probably go with it. Brooks studied downstream homes for possible evacuation.

The old mill has seen lots of floods in its time, of course, some bigger than this one, residents said. But this was significant and unexpected in size.

The mill house seemed remarkably unphased. A housekeeper said there was minor water in the basement.

On the lake side of the dam, ducks and a couple swans swam on the lake without concern, except for a couple of ducks which squawked loudly, apparently because their nest near the dam had been flooded.

Lasater Mill was built in 1928 and operated as a grain mill, grinding flour for farmers who brought their wheat. It is now a private residence, but the owners were not at home Tuesday.