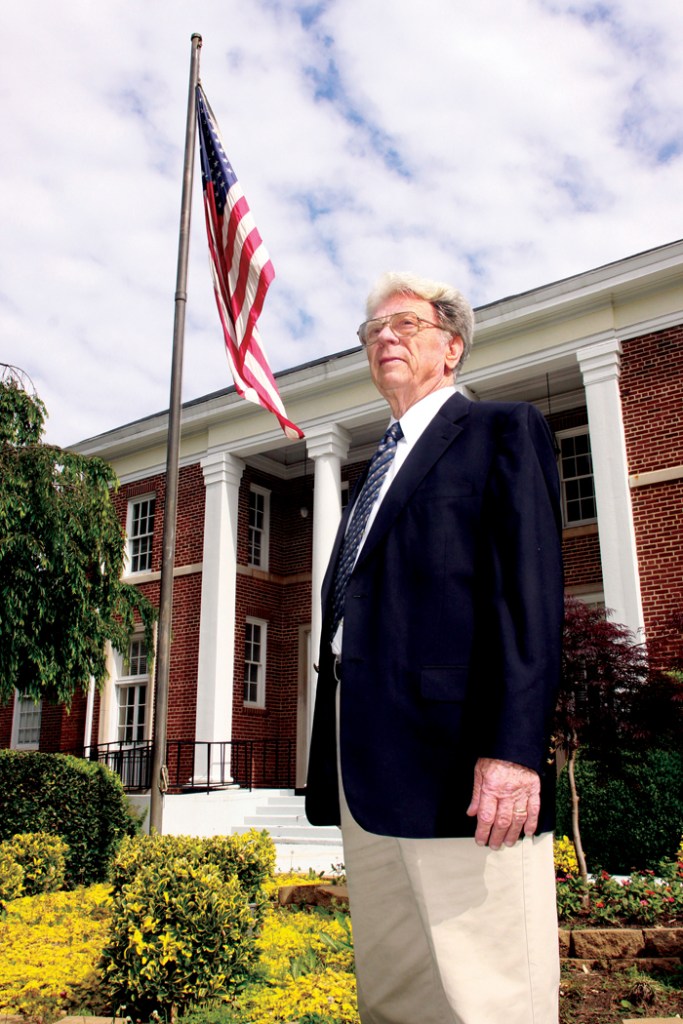 Frank Morgan never thought he was a hero. Heck, he didn’t even want anybody to know he served in the military, much less being a prisoner of war during World War II.

That was typical of Morgan, who died on May 31 at age 92. He never looked for the spotlight or wanted to bring attention to himself.

In fact, when he came to Clemmons in 1951, he made it a point to keep his involvement in the war and serving his country to himself because he didn’t want it to be a distraction to the job he was hired to do.

“I wouldn’t let anybody know I had ever been in the military because I was here to teach English in the high school,” he said in a speech to the Rotary Club of Clemmons in 2011. “And I tried to do just that.”

Morgan succeeded for a long time, transitioning from a teacher to being a principal for some 30 years before retiring in 1984. He then proceeded to do volunteer work in a number of areas “to give back” to the community. His little secret about serving in World War II and being a POW eventually got out when he said it became known he had a quite a history in the military.

“So the town manager decided they needed to get me a medal, so they invited the Congressman down,” he said in his understated manner.

His incredible story, which he shared around Memorial Day six years ago about a “typical day” as a radio operator and gunner in the Air Force, is one I will never forget.

Morgan was equipped with all the necessary equipment, including a parachute with one side connected to the harness, just in case. Then suddenly, at an altitude of 26,000 feet, the aircraft suffered a direct hit over Munster, Germany. Morgan knew he had to bail out if he could escape but eventually was ejected from the plane. He was just hoping he could maneuver to open his parachute. It did, and he ended up in what he called a farm yard, where he was captured.

Of the nine men in the plane, only Morgan and two others got out of the aircraft.

“I looked death in the face and it didn’t bother me at all then, but I get all weepy about it now,” Morgan said.

After being captured, he never thought he’d get out alive. He and others were placed on a forced march, living in barns with no food or medicine for six weeks until they were liberated on May 2, 1945.

“We starved to death,” he said. “We were full of lice and fleas. We were living a day at a time. The horrors of not knowing and fearing extermination were constant. We never thought they’d allow us to be repatriated. We thought they’d kill us first.”

Sixty-five years later, during the time of year set aside to remember those U.S. soldiers who died in military service, Morgan admitted on that day to being thankful for his own survival and the good life he enjoyed.

“We counted our blessings,” he said. “It’s good therapy after all these years to talk about it and get it off my chest. But I must say one thing. The heroes were on the ground. We were giving air support for those boys. I’m no hero.”

Sorry, Mr. Morgan, but with all due respect, that’s just not true.

When they named the new elementary school after him – at the request of the Clemmons High Class of 1956 for his many years of being an outstanding educator who had such an impact on so many students and his community in addition to serving his country – his response at a reception was: “Who would have thought anything like this would happen? I’m dumbfounded.”

Certainly, the name of Morgan Elementary School will serve as a lasting tribute to a man who meant so much to so many in Clemmons – a true hero.