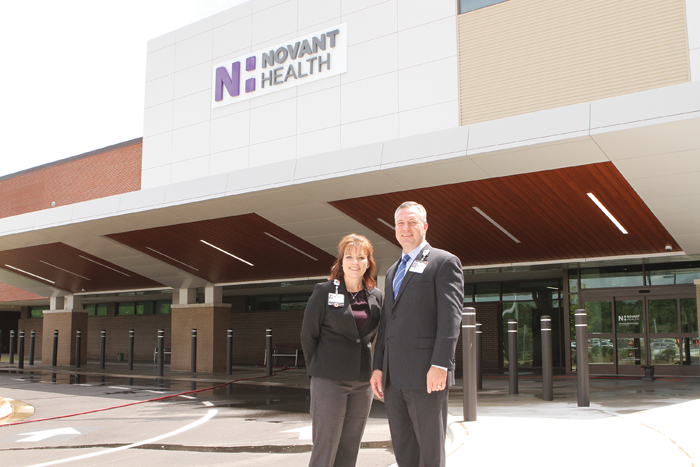 When it opens next week, the new Clemmons Medical Center will already have 100 hip or knee replacements scheduled for August, and it expects to become the area’s center for joint replacements.

An open house for the public is scheduled Sunday from 2-5 p.m. The new 36-bed hospital will officially open Aug. 2 and will specialize in orthopedic care. Most of Novant Health’s joint replacement surgeries in Forsyth County will shift to Clemmons.

The facility is designed for its patients’ comfort — no steps. Hospital rooms don’t have thresholds for hip replacement patients to stumble over as they heal. The hospital is painted in soothing earth tone colors with lots of natural lighting. Windows in patient rooms are large with nice views.

“We’re trying to serve the needs of today but also prepare for the next decade,” said Chad Setliff, president of the hospital at 6915 Village Medical Center overlooking I-40 and Morgan Elementary School.

A healing garden, provided with a grant from the Clemmons Foundation, is behind the hospital for patients to enjoy. A gift by Clemmons businessman Tony Golding paid for a large conference room. Clemmons pictures decorate the facility. A historic wall featuring Clemmons physicians and village history is also to be added.

The hospital has a chapel and is staffed by chaplain Peggy Haymes and other volunteers.

A large cafeteria features a TV monitor that allows families to check on the progress of their loved ones during surgery. The hospital is the finishing touch of a plan started in 2009 when Novant was awarded a state certificate to build the hospital. It is approved for up to 50 beds, but 36 were deemed adequate for now.

The hospital has added 100 employees to its staff, and Setliff said all of them are now on duty. The new facility includes six observation beds, three additional operating rooms, bringing the total to five.

Also underway is the construction of Village Pointe Drive which will connect Harper and Lewisville-Clemmons roads and give more direct access to the hospital from the heart of Clemmons. The road is a joint project of the village, the hospital and the state. The hospital has a therapy room for joint replacement patients to begin their healing. Setliff said the expanded hospital means that Novant has now invested $78.4 million in Clemmons.