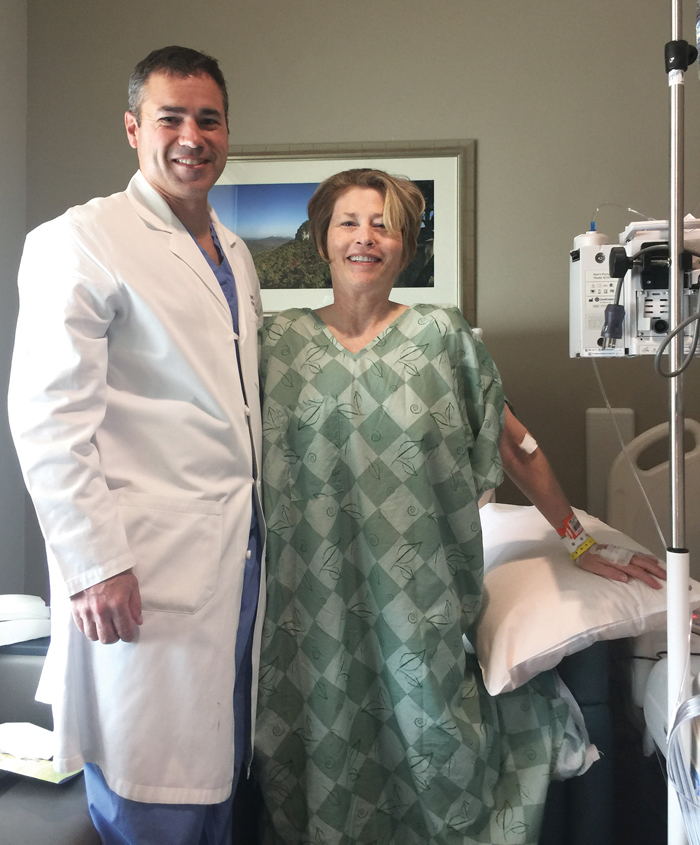 Wendy Holleman holds the distinction of being the first surgery patient admitted to the new Clemmons Medical Center.

She received a replacement hip on Aug. 2, one of five joint replacements performed by surgeons that morning.

Holleman, 52, of Winston-Salem, stood in her hospital room a couple hours later when her surgeon, Dr. David J. Howe, came in the room.

“Can you believe I walked as soon as I got back to the room?” she asked. “I was tired of being in pain and wanted my mobility back.”

She admired the new hospital and her room — but it was the toll-free parking lot outside that won her highest praise.

“That’s the thing. I have friends coming to see me, and I have some cheap friends,” she laughed. “I don’t think you should pay to park when you pay thousands of dollars for the surgery.”

She became one of the first overnight patients on the new 32-bed hospital wing which opened last week. And she was the beginning of an expected wave of hip and knee replacements which Novant Health plans for the Clemmons facility.

Dr. Howe said the process took about an hour. He has performed more than 800 joint replacements a year at Forsyth Hospital.

“We do a bunch,” he said, and now he will shift to the new hospital. “I think it’s great,” he said. “It’s a beautiful place, and for the families, it’s so convenient.”

Unlike the big Forsyth Memorial, the Clemmons facility has easy and free parking. Vehicles can pull up to the front door, and it’s not far to walk inside, even for people with ailing hips and knees.

“We want to make this a premier center for hip and knee replacements,” Howe said. The operating room staff was drawn from Forsyth and is highly experienced, he said. “It was no different from what we do at Forsyth.”