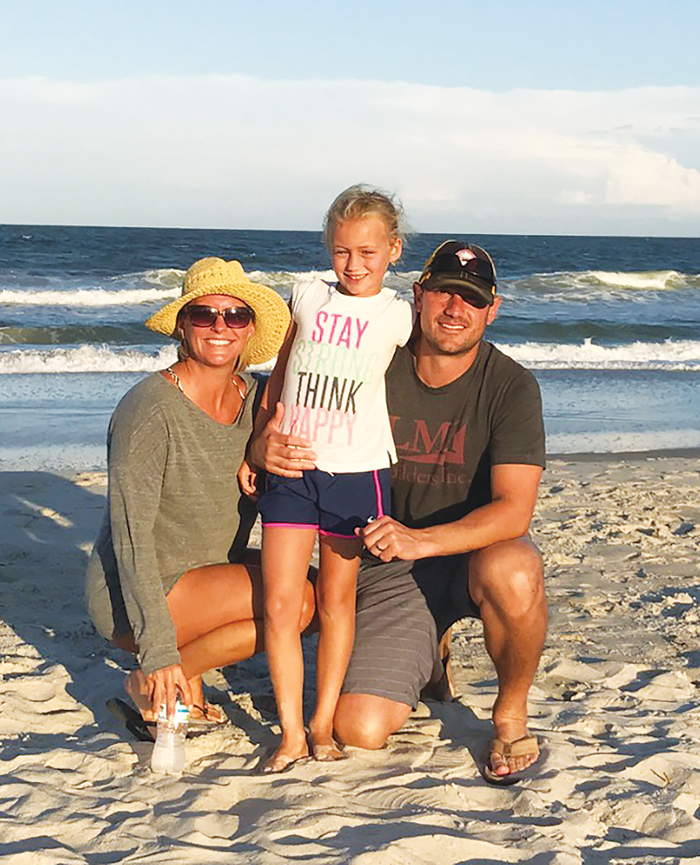 Traci Fala with her daughter, Ollie, and husband, Pete, at the beach.

Traci Fala’s love for her family is the reason she can call North Carolina home. Having grown up in West Virginia, she was devastated when learning as a middle schooler that she would be leaving everything she knew for Greensboro, North Carolina.

“It was a bit of a culture shock,” remembers Traci. “I went from being in a class of 14 in West Virginia to 150 when we moved. Luckily, Traci had been involved in organized sports from an early age. Her mother would drive her 45 miles each way to practice gymnastics starting at age 4. It was a sport that came easy to Traci and brought her great joy. The commute did take its toll on the family, and after 4th grade, Traci took up cheerleading instead.

Cheerleading helped Traci find an instant group of friends when they moved to Greensboro for her father’s job. “It was intimidating to try out since it was bigger. I was worried if I would be good enough.” Traci made the team and even went onto cheer competitively in high school with the Greensboro All-stars. She is still very grateful to her mother for going everywhere her passions took her, which included Dallas, Texas. “It was one of the biggest competitions in the field of cheerleading. It put me out of my comfort zone. It pushed you to excel,” explains Traci. Traci’s hard work paid off. She was accepted to the University of North Carolina at Wilmington. As a cheerleader for the Seahawks, she made some great friends and treasured memories. Her senior year brought change. “There were shake ups with coaching and I really was considering my future,” notes Traci. She decided to take advantage of the student teaching program at the university. She had given careful consideration to the medical profession too. “I really had thought about doing pre-med,” recalls Traci. “But ultimately, I knew I wanted to have a flexible schedule for a family, and something that involved kids. Teaching checked all those boxes.”

Traci spent an entire semester immersed in the world of teaching in Brunswick County. “It really submerges you into the classroom,” recalls Traci. Traci also made other decisions in college that would impact her life. A life long friend, Pete Fala happened to be visiting her cousin at Marshall University the same weekend as Traci. She had known Pete since they were kids. He was from West Virginia and had traveled in the same social circles. They hit it off after reconnecting at Marshall University and they began corresponding. Not too long after, he asked for her phone number and they began dating long distance.

Pete was also a college athlete. After graduating, he decided to pursue a master degree out west in Denver, Colorado while Traci was a senior. She believed in the future of their relationship and joined him out there for two years when she graduated. Teaching opportunities were tougher for out of state applicants in Colorado. In the interim, Traci capitalized on opportunities in managerial roles in both apparel and finance. “I felt very lucky that my boss in the financial advising firm was really good to me,” reflects Traci.

Before leaving Colorado to head back to NC, Pete took Traci out to a very nice dinner. “At that time we were just starting off in the world. He had convinced me that we were celebrating potential job opportunities that he anticipated would pan out in NC. Little did I know that Pete had already asked for my father’s permission to get married. He had asked my dad to keep it a secret. He wanted me to have the opportunity to tell my Mom,” smiles Traci. “He knew that would be an important moment for us.”

Having moved to several different locations in the Triad area, the Fala family ended up building their home, which has been featured locally for its unique contemporary design. Traci was also able to secure a teaching job in the second grade. She had spent time working both part and full time positions, most recently, at Sherwood Elementary School.

“Pete and I are planners. We knew when we were ready to expand our family also,” mentions Traci. They welcomed Olivia Rose in October of 2010. “Olivia was the second most popular name that year. I didn’t want her to be known always as Olivia F. So we called her Ollie and Ollie Rose, which fit her perfectly. Being a parent is the toughest job I’ve ever had, but definitely the most rewarding.”

Even though Ollie was at Sherwood Elementary too, Traci didn’t see her as frequently as one might think. Last year Traci and Pete made the decision to put a temporary hold on her teaching career. “I knew for our family, that was the best decision. I was having a hard time doing it all,” she observes.

Traci did find inspiration to apply her teaching talents and sparking personality in a different forum. “I had noticed a college cheerleading friend of mine was opening a Pure Barre studio in another area. I sent her a congratulatory note, and she immediately responded by saying she thought I would really enjoy the workout and possibly teaching at the new studio near me. I was intrigued and did my research,” reveals Traci. “The owner of the studio in town immediately responded to my email that we should sit down and talk.” The rest was history for Traci. “I can pour myself into teaching because it’s appreciated. I have the love for it. It really is a team atmosphere at the studio.” Traci’s following is extensive. She has a huge majority of regulars that don’t miss her class, even when they are feeling under the weather.

While Traci has appreciated the niche of her Pure Barre family, she still knows her parents, Pete, and Ollie are the reason she is here. “My parents moved to Raleigh last year when my grandparents’ health became more fragile. My mom is such a caretaker,” says an admiring daughter. “I can only hope to have the relationship with my daughter that my Mom and I have had.”

Our neighbor shares the same sentiments as automobile executive, Lee Iacocca, “The only rock I know that stays steady, the only institution I know that works, is the family.”