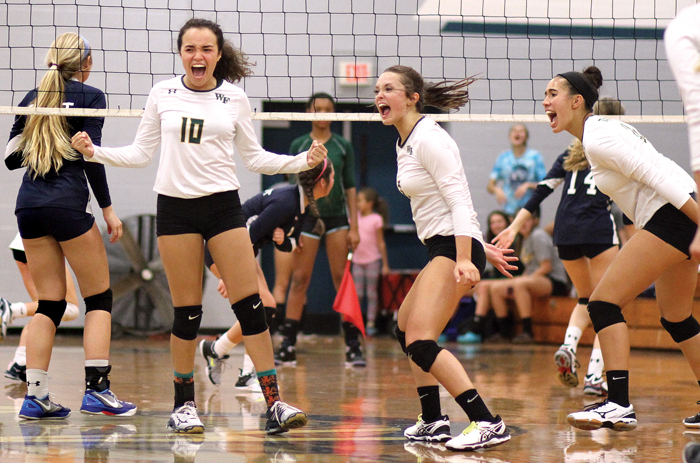 West’s Valeria Rosa reacts to a Titan score during their comeback victory over East Forsyth. Celebrating with her are teammates Sam Graham (middle) and Sydney Joyner (far right). — Photos by Chris Mackie

It seems a bit dramatic to label the first conference game of the season a “must-win” situation.

But with unbeaten Central Piedmont Conference rivals Davie County and Reagan looming on the schedule, the West Forsyth varsity volleyball team simply could not afford to take a loss in their opener at East Forsyth last week.

So after watching her team drop the first two games in unspectacular fashion — falling in game one 25-9 and 25-17 in game two — Titan head coach Lauren Yacobi gathered her team together and did her best to inspire a comeback.

The message was well received.

Fueled by a fast start, the Titans fought back by scoring a 25-20 win in game three and a dominant 25-15 triumph in game four. They clinched the win with a 15-12 victory in game five.

Strong front line play by the Titans in game four ultimately shifted momentum during the match.

The win, coupled with a subsequent loss to Davie, gives West a 1-1 start in CPC play. The Titans blanked Surry Central 3-0 in a non-conference match on Monday night. They were slated to face Reynolds on Tuesday.