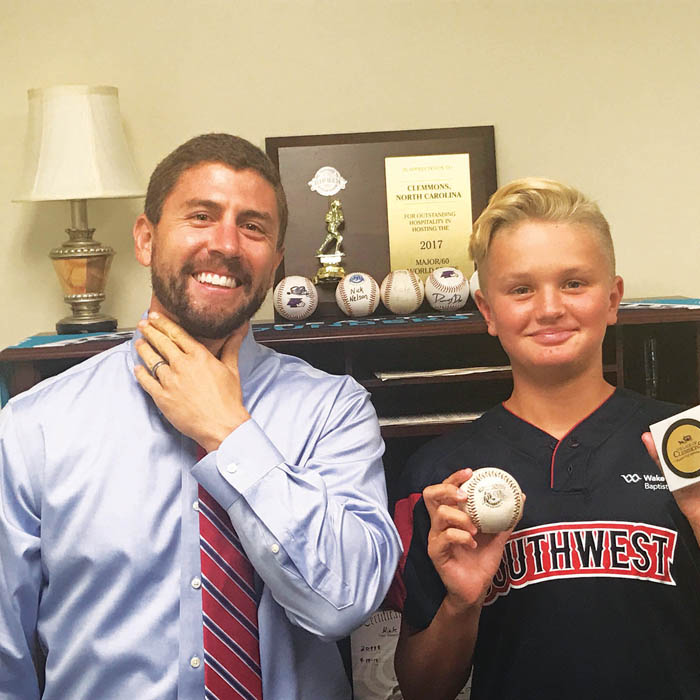 Mayor Nick Nelson displays his beard, and Southwest all-star player William Siceloff holds the baseball he hit out of the park during the World Series to answer the mayor’s challenge.

Beware what you promise.

Clemmons Mayor Nick Nelson has learned that the hard way.

During the recent Babe Ruth World Series in Clemmons, the mayor tried to give some extra motivation to the home team.

“I promised William Siceloff if he hit a homerun I would not shave for a month and send you a picture,” he wrote The Courier last week. “I am a man of my word. He was pretty pumped when he hit the home run, and I think he doubted that I would actually have what resembled a beard by September.”

No, it’s not an Abraham Lincoln beard, but it’s certainly passable.

This was Nelson’s first beard. He says it will be his last.

“I have always wondered if I could grow a full beard,” he said. “That was the first and last time I plan on growing a beard.”

Siceloff said he was satisfied with the mayor’s beard after three weeks and granted him a pardon from wearing it for the full month.
Nelson’s wife and daughter are both happy to see him clean shaven again.