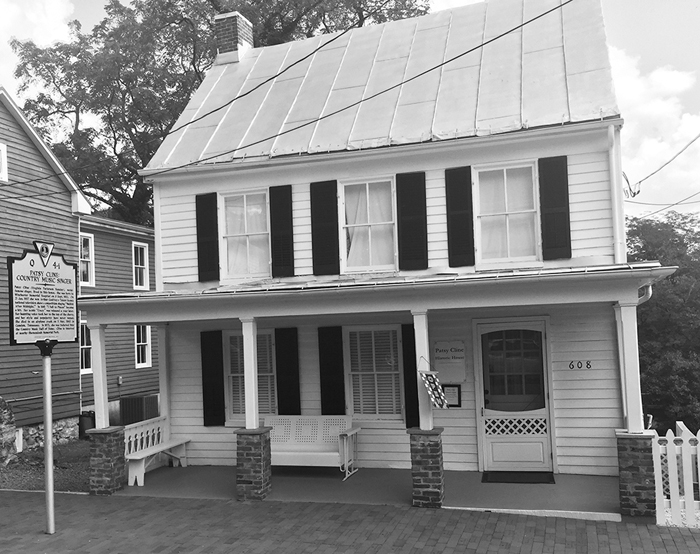 Patsy Cline grew up in this house in Winchester, Va.

WINCHESTER, Va. — She was a poor girl from the other side of the railroad tracks, but she had a hauntingly beautiful voice that took her to the pinnacle of country music. She died in a plane crash in 1963, but her songs continues to inspire.

We found her homeplace Sunday after a visit with the granddaughters. It’s a tiny clapboard house with a tin roof on Kent Street. The street must look very much like it did 60 years ago — quaint row houses lining the street.

The house was open for tours, but we didn’t go in.

I played my collection of Patsy Cline songs to the new grandson, William, the other week in my effort for cultural enrichment. He seemed to appreciate them.

Driving south through the Shenandoah Valley on Interstate 81, we took an exit to see the river near New Market, Va.

We had to drive further than expected. We drove through the town of Shenandoah and saw Shenandoah Elementary School.

An old cannon is on the front lawn, not exactly fitting the modern policy of no weapons at school.

We saw a few Confederate statues and lots of streets honoring Civil War soldiers. One historic marker recalled the Rebel soldiers who returned a few stolen horses after Gen. Lee surrendered. The Yankees had promised to forgive them. The Rebs were shot instead.

Virginia, of all states, should protect the legacy of that war.

The governor, fortunately, doesn’t have that power. The state legislature in 2015 enacted the Monuments Protection Law that shields historic statues from becoming political pawns.

“There are larger issues at work here,” the veterans group wrote. “Unlike Cooper, we do not cherry-pick which portions of our history to remember. The Confederate monuments and memorials on the Capitol grounds are part of North Carolina’s legacy as much as any of the other monuments. Already across the nation there are moves afoot to take down monuments to Christopher Columbus, George Washington, Thomas Jefferson, James Madison, Andrew Jackson, and Woodrow Wilson, and to rename countless institutions, schools, towns, and much more. These efforts are part of an immense national effort which has at its origin small, hard core Communist groups, like the Workers’ World Party in Durham — the same group that cheers on Kim Jong Un in North Korea — who wish to completely erase nearly all American history, to rewrite totally our past, to purify it of all perceived “impurities.” Once begun, where do they — where will it — stop?

“The monuments on Capitol Square are and should remain part of our landscape. They should serve as educational markers that assist us to understand what happened in our past, guideposts where school children on field trips may stop while their teachers impart vital history lessons. To remove them warps our view of our heritage and distorts our view of ourselves. Instead of taking monuments down, we should be putting more up.”