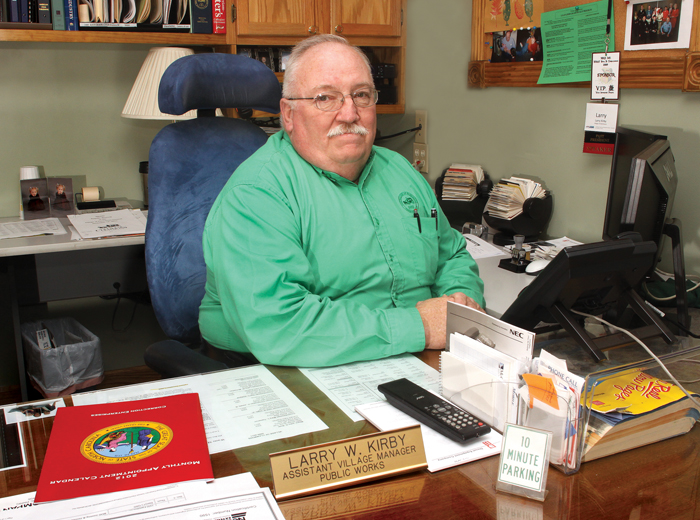 Larry Kirby has filled lots of roles for the Village of Clemmons and retired earlier this year as village manager. On Monday he announced he would be a write-in candidate for Mayor. — Courier file photo

It started two weeks ago with a letter to the editor by Ron Riddle when he wrote: “NEEDED: Write In Candidate for Clemmons Mayor.”

Last week another letter from Nelson White wrote, “Please join me in writing in Larry Kirby as mayor in Clemmons.”

Kirby said his phone started ringing and lots of people have encouraged him to run.

“That spearheaded probably visits and phone calls from 75 folks who said this is what we need,” he said. “I do love the village.”

Kirby was public works director for 26 years. He created the position, and the village council earlier this year named the public works building for him. He was village manager for two years, retiring in February.

Now, Kirby said he will serve as mayor if elected.

“I’m not going to leave Clemmons in the hands of people who don’t know about local government,” he said Monday. “My wife and I talked it over, and said I don’t see that I have a choice.”

Neither of the two candidates who have filed for mayor, John Wait and Paul David Reich, have held elected office in Clemmons.

Most of the campaign talk has centered around a proposed median for Lewisville-Clemmons Road south of I-40. Wait has said he is against a median, echoing Mayor Nick Nelson’s position. Nelson is not seeking re-election. Reich has said the discussion of a median is premature.

Kirby said it’s too early to decide the median question before the N.C. Department of Transportation finishes a study on that critical section of highway. “There is no answer for the median at this time because there are no plans drawn to make an educated vote on,” he said. “I don’t know if we need one or not. All DOT has done is offered the money.”

He said voters should not elect village leaders on only one issue. “Clemmons is a multi-issue community, and one issue is not all elected officials ought to have on their minds,” he said.

He said he would campaign in the same way he operated as public works director and village manager: “Listen to the citizens of the Village of Clemmons and do the best I can do to serve them in any way possible. I’m going to attend the candidate’s forum and try to be as up front as I possibly can be.”

He unveiled his campaign theme, “Do the write thing … Vote Larry Kirby for Mayor.”

Kirby issued the following statement on Monday, “Village of Clemmons residents, many of you have called or stopped me publicly. The question from each of you is: Will I run as a write-in Candidate for Mayor? Clemmons is a multi-issue community and needs knowledgeable people running it. Today I have filed with the election board to run as a write-in candidate for Clemmons Mayor. Now I need your Voting approval on Nov. 7, 2017. I have had the privilege to serve each of you for the past 30 years, so, if elected, that will continue. Clemmons is a great place to live, work and raise a family; each of you have played a role in making it a great place. Each of you must keep doing this by getting out and Voting.”

Council member Mike Rogers welcomed Kirby’s candidacy. “We’re getting a candidate who has 30 years of experience in the village government and has been active here all his life. He has proven himself in the role of leadership,” he said. “Larry will make an outstanding mayor with the vast experience he has with the Village of Clemmons, and I am very glad he has decided to step up when the Village really needs his leadership. I think it’s wonderful.”

Reich issued a statement last week about the median. “All the discussion about the median on Lewisville-Clemmons Road is a waste of time and a little premature,” he wrote. “NC DOT will not put in a plan the Clemmons Council does not like. Clemmons Council has the last say if a median will be put in place. The problem with massive congestion and dangerous accidents will continue to be a problem although flow of traffic and safety of people is a big concern.” He added, “So please understand all the talk in the world before May 2017 is a waste … Until then we are just talk. Try to keep calm and let’s follow the town council to a good decision and move on and grow with each other and Clemmons.”