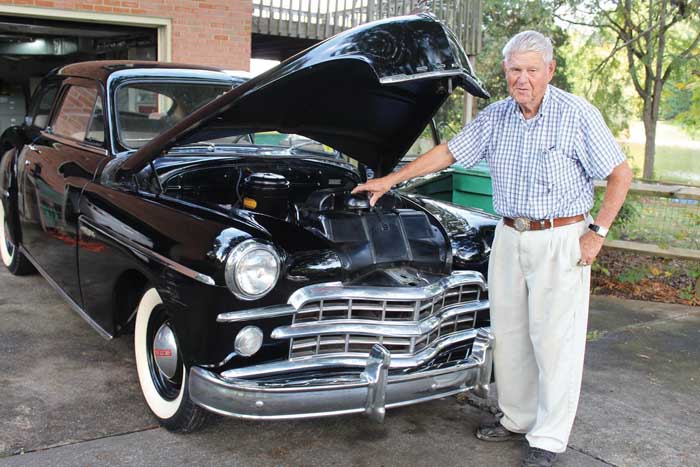 George Ernst at his Old Meadowbrook home with his 1949 Dodge Wayfarer after returning from the Dixie Classic Fair where the car was on display at the veterans Wall of Honor.

George Ernst, 83, turns the switch and his 1949 Dodge Wayfarer cranks with a purr. Not a roar. This is a gentle car and it has always been treated with loving care.

It has seen only 69,778 miles and has the original interior. There’s a “flathead 6” under the hood, a remarkably simple motor by today’s standards. No radio. No heater. Wide white wall tires. The original tail pipe. Only a rear view mirror has been added. “It’s solid as a rock,” Ernst said, whacking the trunk for emphasis. He bought the car years ago from Brown Clodfelter, also of the Old Meadowbrook neighborhood.

The old car has just returned to its Old Meadowbrook garage from its annual road trip to the Dixie Classic Fair where it was displayed along with the Wall of Honor photos of Forsyth County veterans.

George Ernst and some of his brothers are among those photos. He was a parachutist in the Army’s 102nd Airborne Division, 1954-56, jumping out of perfectly good airplanes 16 times. Ernst grew up in the heart of Old Salem, as a boy living in the Timothy Vogler House, the gunsmith’s residence, as a boy. He’s a member of the Home Moravian Church brass band, playing trumpet at funerals and the Easter Sunrise Service.

After the Army, he enrolled at Appalachian State Teachers College and met his bride, Patsy. Both came back to Forsyth County to be teachers. She was once named Forsyth County’s teacher of the year.

George Ernst taught vocational education and business at West Forsyth High for 18 years and recites many of his old students’ names, students who have now become the Who’s Who of Clemmons businesses and even the North Carolina State Treasurer, Dale Folwell.

“Most of them have really made something of themselves,” he said. One of the things he taught his students was how to buy a car.

“I would take my girls at West Forsyth out to the parking lot and teach them how to evaluate a car. I would blindfold them and have them smell the car, open and close the doors, the windows,” he said. They would look under the floor mats and in the trunk, not just kick the tires.

Ernst doesn’t take it easy despite his advancing years. He watches out for his neighbors and meets twice a month with a group of mostly World War II veterans.

Scoffing at the recent NFL dispute over the National Anthem, Ernst said all his veterans religiously stand for the Anthem despite their infirmities.

He said Americans have three civic responsibilities: “We vote, we serve on the jury and we serve our country. That’s what we’re obligated to do.”