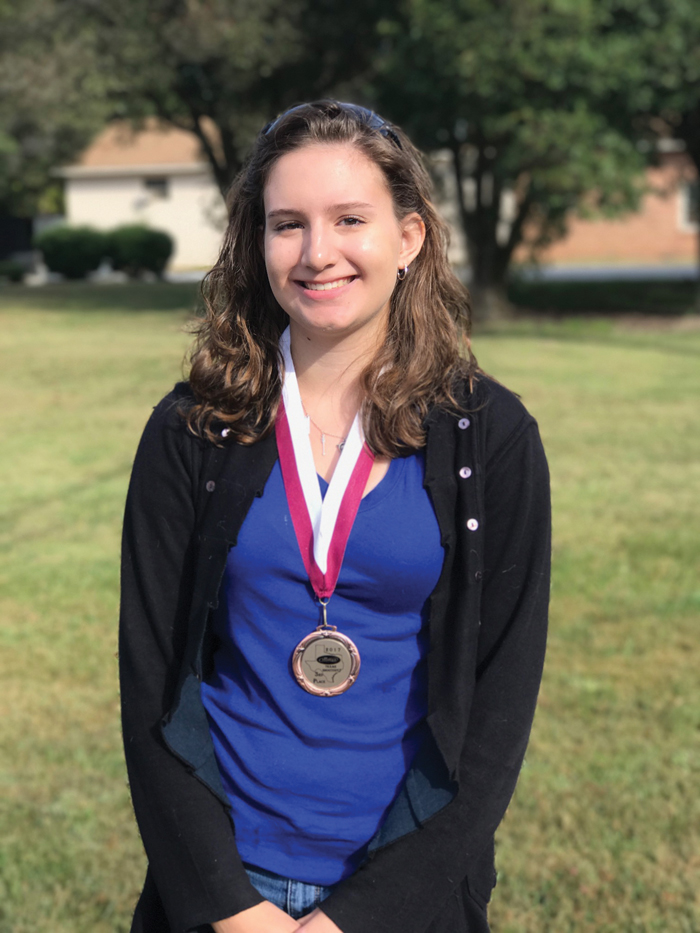 Neighbors are familiar with Emma Jordan. They often slow down while driving by to watch her practice an ancient skill. Like actress Geena Davis, Emma is a toxophilite — a fancy word for saying she is an expert archer. For Emma, archery wasn’t so much something she started out expecting to excel at as much as something that evolved from a keen interest and an environment that nurtured her childhood hobby. Her lifestyle has allowed her to practice with impressive discipline and with great result. Emma and her two sibling were home schooled. “It was really great,”

Emma says about her upbringing. “One of my favorite things was having hot cocoa during math or going to play in the snow and doing school later.” Being home schooled allowed Emma to practice archery as well. “When I asked my mom for a bow and arrow for my birthday, she was shocked and said, “You want what?’” Emma received her first bow and arrow on her thirteenth birthday. While it was just a plastic one, she loved it. “I’ve wanted to shoot for as long as I can remember. I loved the archery in ‘Lord of the Rings.’”

It started to become fairly obvious that Emma’s love for archery was not waning with time. After a year of practicing, Emma received an Olympic style bow. It was about six feet tall. She needed a tall bow because she has long arms. She also made a decision about what type of archery she would pursue. “There are two different kinds of archery, bow hunting and field archery.” Bow hunting is for those going hunting. Field archery is where you hit a target. It is the type of archery used in the Olympics. Emma prefers field archery. There was just one problem. Emma had a difficult time finding a coach in our area. “I didn’t have a coach for over the first year. I didn’t know how you are supposed to keep your arm out of the way. The string hit me twice. The first one was a burn. The second one turned my arm every color of the rainbow and was a big bruise,” recalls Emma. “So I had to get over this flinch for the next couple of years because I was scared to get hit.”

Eventually, Emma learned to keep her arm out of the way. She also entered in her first competition. “I threw up before my first competition because I was so nervous. My equipment wasn’t great. But since I’ve started working with my current coach, Allison Eaton, I don’t even get nervous before competitions.”

Eaton lives in Efflon. For years, Emma’s mom drove her daughter the hour and a half jaunt to Efflon so Emma could perfect her craft. Emma now makes the drive herself. Emma’s dad also created a practice area in the backyard. They have calculated the exact distance from where Emma needs to stand to where the target needs to be. Although there was a creek where Emma needed to stand, her dad was undeterred and built a platform. Emma’s mutt dog, Myra, is also supportive. Myra lies next to Emma, keeping her company as she practices and walking with her when she retrieves arrows.

At eighteen, Emma competes all over the United States. She recently competed in Texas and took third place, putting her 14th in the country for her division. “I’m also focusing on making the USAT.” The USAT is the United States Archery Team. They travel internationally to compete for the United States. “To make the team — it is based on your performance over the course of they year and how well you do in competitions. I wasn’t focusing on that earlier this year, but I’m working on it and hope to be there next year.” It could possibly lead to a spot on the team. Women archers on the Olympic team range in age from early twenties to early forties.

In the meantime, the eighteen year old works at a coffee shop to make ends meet. She also likes to use her creative side to make jewelry. “I have taken a class at the Sawtooth and that has interested me in jewelry and working in jewelry.”

Shooting her arrow, though, is her biggest focus. No one is more surprised at her success than Emma. “I never thought I would be an athlete. We are not a sporty family,” Emma laughs. There is no denying, however, that Emma has a great passion for this historical sport. “It’s really hard to describe, but it sets off something in me. I even learned how to eat differently. How I needed to exercise to keep myself in good shape to be better.” Emma also does some physical training directed at helping her archery. “In addition to practicing, I do a lot of push-ups, stretch bands, curls, grip exercises and a lot of core. A strong core keeps you more stable when you are shooting.”

Maybe another part of what keeps Emma interested is an experience much like what Eugen Herrigel talked about in Zen in the Art of Archery. He said, “Don’t think of what you have to do, don’t consider how to carry it out!” he exclaimed. “The shot will only go smoothly when it takes the archer himself by surprise.” Perhaps, it is the regular surprise and gratitude that comes with every near-perfect and perfect shot that makes the pursuit worthwhile. It can be intoxicating. It is the beauty of many sports. It is why so many of us do them and so many of us enjoy watching them. Join me in wishing Emma luck in her quest for a spot on the United States Archery Team. However it turns out for her, it is clear she is enjoying the journey.