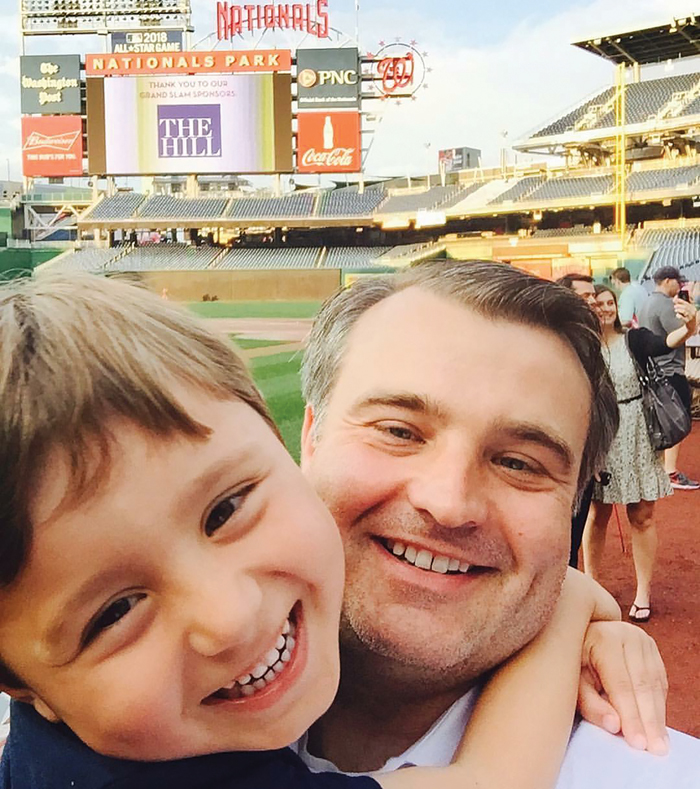 Todd Poole with his son Jacob at a Washington Nationals game this summer.

In 1980, Ronald Reagan was running in the presidential race to beat President Jimmy Carter. One of Reagan’s verbal jabs about Carter was, “The conduct of the presidency under Mr. Carter has become a tragic-comedy of errors. In place of competence, he has given us ineptitude.” Reagan ultimately would win the heart of the voters with his communication skills and peacemaking ability.

A little boy taking a front seat to the heated debates was Todd Poole. He and his great grandmother sat in the living room to watch the two presidential nominees vie for the most prestigious position in politics. “That’s when I first became interested in politics. I would watch the news with my great grandmother,” Todd recalls. “President Reagan really inspired me.”

Todd’s love of politics did not stop after sitting in the living room with family. He became involved with student politics. In August 1994, at the age of eighteen, Todd went to vote for the very first time. “That was the fist time I met Congresswoman Foxx (R-NC). She was running for a state seat.” As Todd entered college, he continued to pursue the political world. During Todd’s senior year at Appalachian State University, he was elected as vice president. It was at the Concord coalition event held in Boone where Todd met then Congressman Richard Burr. Senator Burr was still on the House side of Congress at the time. “He said, ‘if you want an internship, I will give you one. But if you expect a job, we are not going to give you a job.’” Todd adds, “I think he didn’t want to get my hopes up because I was fresh out of college.”

Three months later, and after the internship, Todd got a job working in the Winston-Salem district office for Congressman Burr. Dean Myers was district director. Todd respected Dean’s calm demeanor as a leader. “I watched him and learned a lot,” says Todd. “It was there that I learned how government really works outside of the text books.”

In 2004, Senator Burr chose to run for Senate. A slew of candidates flooded the ballot as a potential replacement for Burr. It was the most expensive primary held in North Carolina at the time. “There were a lot of really talented candidates who were able to raise a lot of money.” Todd campaigned for Jay Helvey. While Helvey lost in the primary, Todd was asked to help campaign for the winning ticket: on Foxx’s team. Although at the time Todd did not know whether Foxx would win or not, he chose to decline the invitation and go work for the Bush/Cheney presidential campaign. “I was trying to work my way back to Washington, D.C.” However, once Foxx solidified the victory as Congresswoman for the 5th district, Todd finally accepted the offer to work for the woman he had met the first time he voted at eighteen.

As district director for Congresswoman Foxx, Todd was in the same position as his first mentor, Dean Myers. Todd held that position for two years. He was then promoted to chief of staff while holding the position of district director. Todd was living in NC, but commuting to D.C. “Commutes take a lot out of you. I would usually catch an early flight out around 5:45 a.m. on Tuesday fly out late Thursday evening. It’s draining. I lived out of a suitcase. I would leave my clothes in the office a lot of times.” His lifestyles sound a little bit like the life of a congressional member.

One Congressman who Todd became close with while commuting was Congressman Howard Coble. Coble represented the Greensboro area from 1985 to 2015. “I began to have a close relationship with Howard. We took a lot of the same flights. We took car rides together back and forth from the airport.” The two began to form a brotherly bond. “One day, I told Howard, ‘don’t tell anyone, but you are my favorite member of Congress.’”

Howard, being the witty man he was, called Todd from the car one time while riding with Congresswoman Foxx. Foxx was still Todd’s boss at the time. “Howard said on the phone, ‘don’t worry, I won’t tell anyone your secret.’ Of course, the Congresswoman got on the phone and asked my secret,” Todd laughs. “And her being the very persistent person that she is, wouldn’t let me go until I told her. So I told the Congresswoman that I told Howard he was my most favorite male member of Congress.’” Todd grins because Howard then did the same thing with Senator Burr in the car. In which, Todd then said Howard was his favorite House member. “So Howard kept getting me in trouble with my boss and former boss. One day, I told Howard, ‘you keep demoting yourself because you are telling our secret.’” The two got a good chuckle.

Eventually, Todd left the commuting world and began his own consulting company, the Red Dome Group. But soon after, a job opened for the executive director position of the Republican Party for North Carolina. “I wasn’t really interested. Folks had warned me that few people come out of the job unscathed.” He finally accepted. With Todd at the helm, the Republicans began to take over. For the first time ever, Republican sheriffs held the majority in the state. “That was a goal of mine that I had kept quiet and have never made public until now.”

During that election cycle, Tom Tillis was also trying to take the Senate seat from Democrat, Kay Hagan. Todd, of course, was a key component in Tillis’ win. The reason being, they did something that was unprecedented at the time. They hired a data analytics company to build profiles on voters. “They built profiles on voters and then we would send out direct mailers or make phone calls based on the algorithms produced. Our model was right on target. I was dumbfounded. The company nailed it.” Tillis went on to win the Senate seat.

The data company went on to work with Ted Cruz as he won Iowa during the 2016 presidential race. But then Cruz lost the funds to keep the company on board. Donald Trump snatched up the company quickly. It worked as he clenched the presidency. “We were the first entity to hire them in the United States,” says Todd. “Data driven campaigns are here to stay, but I think you also have to have good political instincts and boots on the ground.”

Todd had planned on staying on as executive director, but when Hassan Harnett came on, he realized they would not work well together. Todd became chief of staff for another congressional member from North Carolina, Richard Hudson. Todd moved he and his family to D.C. However, his house in Davie County never sold. It stayed on the market as his wife, Marcela, got a job and his son, Jacob, began to attend preschool in D.C.

Back in North Carolina, gerrymandering had caused the redistricting of Davie County. There was a brand new congressional seat open. “The new seat opened in the county where my home had not sold.” When Congressman Ted Budd won the seat, Todd moved back home to his same house to work for the new Congressman. “We were thrilled to be back home. It was a divine chain of events that made it happen — from the court-ordered redistricting, to our house not selling, and Representative Budd being elected.”

But the reason Todd does all of this back and forth, commuting and moving is because he really enjoys helping constituents. One story in particular still influences Todd to this day. “I was contacted by a woman who was dying of cancer. She wanted to reconnect with her daughter and granddaughter. She said she had been a bad mom and wanted to make peace before she passed.” Todd found the daughter and granddaughter who were living in England. He gave a letter from the mother to the Embassy. The Embassy passed it to the daughter. “Shortly after, the daughter wrote me,” Todd notes. “She said her mother had passed away. But before passing, the mother urged the daughter to let me know they had connected. Having a part in that and making a family a little bit better meant a lot to me. Still does,” says Todd. “I tell that to every intern that comes in. I let them know every phone call they answer is opportunity. It is an opportunity to make someone’s life better.”

Our neighbor’s life and selfless contributions likens to a quote by President Ronald Regan, “We can’t help everyone but everyone can help someone.”

Shortest meeting ever? Less than 9 minutes