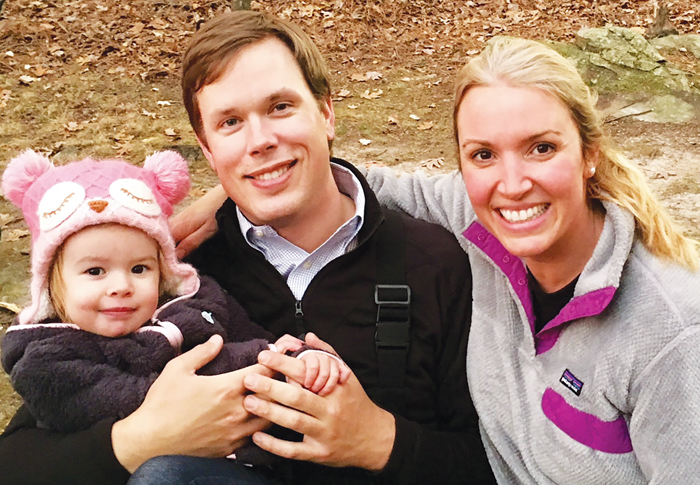 Scottie Johnson with daughter Claire and husband Will.

“I think my parents have always helped me in pursuing my interests — teaching me to go after the things I have been interested in,” says Scottie Johnson. “I had a great group of friends and a great school that pushed you and encouraged you to do new things.” It would seem Scottie was a go-getter from the time she was born in Durham, North Carolina. In fact, the pool she went to since she was six-years-old was one she anticipated managing as a lifeguard. After lifeguarding for years, she was ready to take over as manager. “That summer, they changed companies who managed the pool. The new company brought in this new guy who no one knew. He came to manage the pool.” Scottje worked closely with this new manager, Will Johnson. The two reconnected at Chapel Hill where both attended college. “We were friends for a while. After we started dating at Chapel Hill — we’ve been together ever since.”

Will understood Scottie’s natural drive to succeed. So when she landed a job in Connecticut after college, the two began a long-distance relationship. “I worked with Purina for a year and a half. But after Connecticut had one of its coldest winters in seventy years, I decided to move,” Scottie laughs. Scottie tried to get closer to North Carolina. Virginia was her next stop. She again worked with a company that sold food for animals.

“It started as a really small company, called Old Mother Hubbard, out of Massachusetts. The owner developed a product. He had a lab and was looking to develop a better dog food for his sick dog,” notes Scottie. “It went from this tiny company — I mean, I remember putting samples in zip lock bags — to growing to an international company, known now as Wellness.” Scottie was told by her CEO, “Think like an owner.” Scottie says that philosophy stuck with her. “I tried to think bigger than the project in front of me. I tried to make sure everyone on my team had the same philosophy,” Scottie acknowledges. “It was great because, at the time, we succeeded in our numbers and were all very respectful of the people we worked with. It was a company destined for growth.”

Perhaps the growth occurred because Scottie was one of the sales managers at the helm. Scottie was in charge of the company’s three biggest clients: Petco, Amazon, and Petsmart. That would be a lot of territory to cover for Scottie, considering that Petco’s headquarters was located in San Diego, California, Amazon’s headquarters was in Seattle, Washington and Petsmart was in Phoenix, Arizona. Plus, Wellness was located in Boston. Because Scottie was working directly with the CEO of Wellness, she was at all the top meetings. “I had the highest perks you could have with the airlines and with Hilton. That is a good thing and bad thing. If you have all those perks, it means you are traveling a lot. I was gone from my family a lot.”

As Scottie soared in her career, she was also beginning a new family. She had married Will. The two had moved to North Carolina. Soon after, they had a daughter, Claire. “Claire had a nanny she adored, but sometimes I wondered if I was second to the nanny,” Scottie smiles. Scottie realized she could not be in two places at once. She decided to give up the corporate life in exchange for her baby’s kisses. “It was the best decision and one I do not regret.”

An active person by nature, Scottie has not necessarily slowed down. She is very involved in the community. “Not being from here, I thought it would be hard to become part of the community. But this is an awesome place to be and reminds me of where I lived in northern Durham. After traveling to Phoenix, Seattle, and living near New York City while in Connecticut, I still like it here more than any other place. It will be hard pressed to get me to leave.” Scottie says she has found comfort in the YMCA. “There are a lot of moms there who have young kids like I do.”

After happily immersing her life in the YMCA and our local community, with all of its opportunities for socialization, our neighbor still seems to enjoy being a team player. Anyone might want to have such an enthusiastic friend on his or her team, no matter the professional or personal setting.