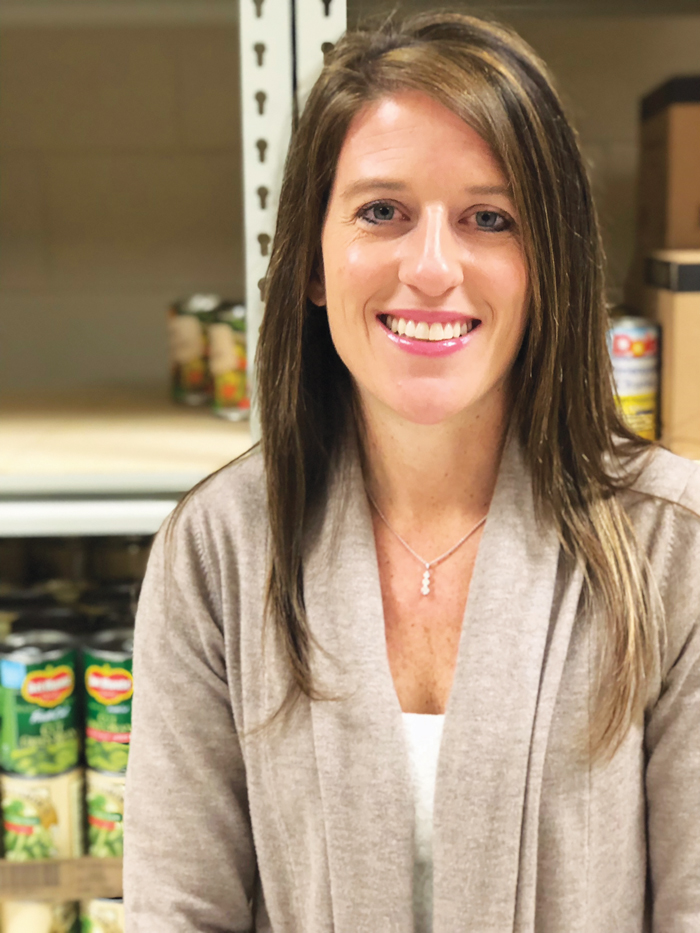 Lori Smith’s new mission is to fight hunger in Davie County. She is shown at a food pantry.

Life’s journey can often have many twists and turns. Experiences can mold a person’s outlook and even influence the direction one takes. If you ask Lori Smith, her moral compass developed, in part, by being raised by a mother who made sure she had a church upbringing. She says, “I have two brothers. We were very involved in the church, Calvary Baptist. It is a great church that enables families to get involved,” says Lori. “I remember one time in my youth group, we delivered Christmas to a family. We provided their gifts. Knowing we provided them with a Christmas was impactful for me. I love helping others and I think that stems from my upbringing.”

Lori grew up in Davie County. She was a latchkey kid. Although Lori had a stepfather and her real father lived within driving distance, her mother did most of the raising. As a result, Lori learned how to become independent at a very young age. In school, Lori thrived. Her grades were good enough to gain acceptance into Chapel Hill. While she attended there, she met her husband, Alan. The two got married and lived in the High Point/Greensboro area. Lori worked full-time at Meryl Lynch while Alan was in advertising. The couple soon had two girls, Madison and Taylor. A move back to Davie County was the next step for the young family. “I did not want to move back, but I feel like it was God’s plan. I became very involved with the high school campaign.”

Whether or not to build a new high school in Davie County was a heated debate for more than ten years. Finally, in 2014, voters overwhelmingly approved bonds for the $54.5 million needed to construct the new high school. One of the main groups to support the building of the new school was the DC Moms. They helped spread information, notifying the public about what was going on at the school board level and county commissioner meetings. “I had began working part-time when the girls were little, so now I had time to focus on the campaign,” recalls Lori. “We met in someone’s living room and decided this can’t happen. Everyone would benefit from this school. We found out there was a lot of dirty politics going on. I think the county commissioners were doing everything they could to prevent building a new high school.”

To combat the commissioners, Lori and her other fellow DC Moms took to Facebook to create a social media campaign. They knocked on doors, printed out flyers, and stayed really committed to their grassroots campaign. “Our focus was on early voting,” says Lori. She adds with a laugh, “You get strong mamas together and you get people engaged — we had a lot of people for the school.” Lori admits, “It was sad, because there were times when it divided the county, but I really do feel like it ended up being the best situation for everyone.”

Doing what is best for everyone is something Lori is very passionate about. She not only likes to push herself personally toward success, by running 20-30 miles a week for instance, but she works tirelessly to help those in need as well. “On my days off, I go to volunteer. For instance, I called all the counselors at our local schools and asked them which students needed coats. So we did a coat drive.”

Giving to children at school is very typical of Lori. Instead of giving her items to Goodwill, she will call up the schools and ask if a child needs whatever she can pass along. Lori has also served food at the homeless shelter. It is not uncommon for her to ask a friend to join. Lori will serve spaghetti and her friend might serve the salad. “It’s tough at times, but we can all give, either by calling up your school, giving financially, or just giving your time. I have a strong passion to serve others directly. I like to be the boots on the ground. I hope to instill that in my children—the passion to serve others.”

Currently, one of Lori’s missions is to help the hunger fighters program. She, of course, contacted the local school and asked the administrator how she could help. “I met with the principal and there are about 650-680 free or reduced lunches served everyday. That is a big number. So we have created a food pantry at the high school where kids can go pick up food. We are trying to get items like shampoo, soap, toothbrushes — so the kids can just come get it whenever they need to.”

With the holiday season being one of giving, our neighbor reminds us how even our time is a valuable gift to others. A simple smile can even be a way to spread much needed cheer. As for Lori, her desire to assist those in need seems much like a natural fire — one that burns bright and warms those around her.