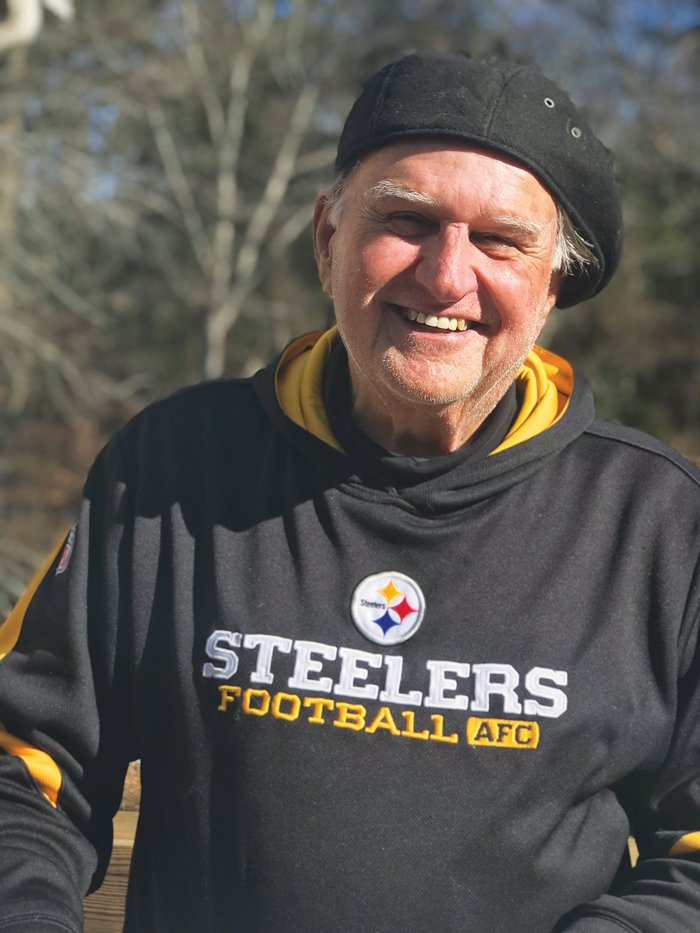 A Pittsburgh native, Joseph Rajacich once patented a device, Practice Partner, to toss back baseballs.

It is 1945. World War II has just ended. Christmas is here. Joseph Rajacich, is six-years-old and living on a farm in a small village outside of Pittsburgh known as Brenzier, Pennsylvania. “After the big war, many of the young soldiers were coming home from Europe,” says Joseph. “I remember seeing wreaths on the doors that the coal company made for its workers. Some wreaths had black ribbons on them. I asked my mother why and she says it is for the soldiers who did not come back to those families after war.”

Joseph’s parents had very little money. His father was from Croatia. His mother was Serbian but born in America. She was raised in a Catholic orphanage where she was mistreated. Joseph’s mother had six kids from a previous marriage and six more kids with Joseph’s father. Joseph’s father worked in the coal mines. Many of the coal workers could not speak English and would come to Joseph’s mother for help with translating.

On Christmas Eve, Joseph’s father brings home a big box. “He opens the box and to our disappointment, there were no toys. All is not lost, however. He lines us up and begins to take out the contents,” notes Joseph. “He takes out the contents one by one. A large popcorn ball was wrapped in green and red cellophane paper –– one for each of us. Next, a big red apple and orange, for each of us. Lastly, a big box of hard tack candy. Each coal miner was given the same box for their families.”

As Joseph and his brothers and sisters settled down into their beds on Christmas Eve, they began to hear a loud noise. “My eyes were just closing when I hear the air raid sirens. All the lights had to be turned off so the air raid warden would not come to our house,” recalls Joseph. The family huddled under the table in their kitchen. Pittsburgh built planes, ammunition, and tanks, so that area would have been a prime target for the enemy. “All of a sudden I could hear planes flying over my house, hundreds of planes. It was scary. It was many hours before the lights came back on. It was after midnight.” For Joseph, this is the first Christmas he recollects. He also recalls not being very good in school. “I can remember first grade because I was in first grade two times,” Joseph laughs. “I didn’t like school much. But when I got to third grade, they liked me so much there, they kept me there also. One time, I promoted myself to fourth grade for four or five days, but they soon caught me.” Joseph also recalls the time the coal miners accidentally dug under his school. Part of the school caved in and so there was no school for a couple of weeks.

Eventually Joseph graduated. His siblings and friends were drafted to Vietnam but Joseph was disqualified due to a heart problem. “I think the Lord was looking after me because there were a lot of people that did not come back.” Joseph began working at a state hospital for those who were mentally ill. Many nurses from the south came up to the state hospital for training due to the great size of the hospital and its 3,000 patients. The hospital resembled a college campus. “I made it my job to show the nurses around,” Joseph laughs. One of those nurses happened to be Joseph’s future wife. The hospital eventually had to close due to meager funds and every patient was let out into the public except for the really ill ones. “Back then, people could put kids in there because of anything. Even if they were a little slow. A lot of those people, according to my wife, shouldn’t have been in there. People, a lot of times, just forgot about those admitted.”

Joseph and his wife moved to the south where Joseph began working for R.J. Reynolds Tobacco Co. Joseph went to business college. He and his wife also had two boys. The boys began playing baseball in Clemmons. Joseph would help coach. There was a clear need for better training equipment. So Joseph wanted to have something that would help the boys improve their fielding and catching abilities. “I came up with the idea in 1984. I was rejected three times because they said there were other ideas out there.” Joseph hired a patent attorney out of Raleigh and the two insisted the patent office was incorrect. “The last time, they had accepted a patent similar to mine. But that person had filed their patent after mine. So I should have had the rights because I had filed my idea first. My wife noticed that. Not my attorney,” Joseph says with husbandly pride. Next, Joseph told the patent office of the discrepancy. He had his patent accepted after two days. His invention was finally on the market and called the Practice Partner. The device springs the ball back like a trampoline so a baseball player could practice catching all by himself. “That was the main product we built on.”

Due to the fast growth, Joseph eventually left RJR to start his business of selling his invention. Other folks tried to copy his invention. Joseph approached those people and let them know he had the patent rights and was willing to go to court over it. Those people backed down and one even became a client, buying Joseph’s equipment. Joseph went on to invent other equipment for other sports and turned his company into a large operation. He invented the hammock canopy and the practice net. “We manufactured in the U.S. and then went overseas.”

Joseph’s parents, who spoke many languages, due to their nationality, were also quite inventive. For example, Joseph’s father did not believe in modern machinery. He made his own tools for the farm. “He would cut the grass with a big scythe and swing it through our eight acres of farm. He would also make huge wooden rakes for us. We would have to come behind him the next day with the rakes and turn the hay so it would dry on both sides. He also made his own wheel barrow. He put a wheel at the end with these large pieces of wood. He would be pulling it with a big belt while us kids put hay on it,” says Joseph smiling. “It was hard work but it was fun.”

Perhaps that is how Joseph felt about his invention. It was hard work but fun. Like father like son, Joseph found a need and created his own tool. While our neighbor was not the sharpest tool in the shed during his school years, Joseph proved his ambition was more important than A’s or B’s on a report card. As children approach Christmas break this holiday season, observe your child. Does he or she have the same creativity as Joseph?