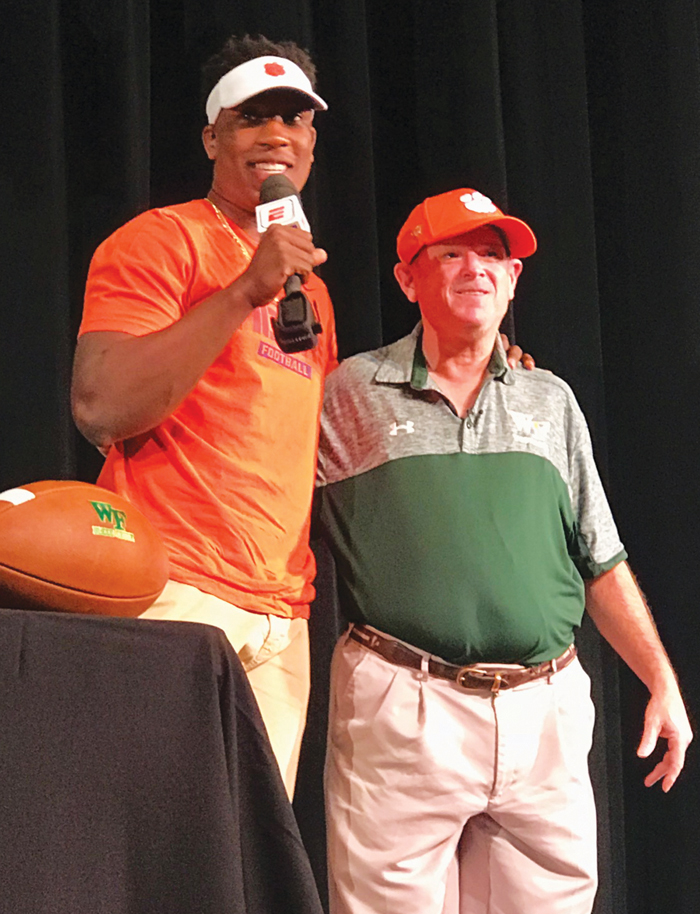 KJ Henry declared for the NFL Draft after spending five seasons with Clemson.

The best-kept secret at West Forsyth and in Clemmons involving KJ Henry, the state’s No. 1 college football recruit, was finally revealed last week on ESPNU. That’s when he announced to the world that he would be going to Clemson.

Henry, a 6-6, 235-pound senior defensive end who is ranked as the nation’s fifth best prospect by ESPN.com and No. 8 according to 247Sports, made his decision several days before last Wednesday’s announcement at the Anderson Performing Arts Center at West but had only shared the news with his dad, Keith, and head football coach Adrian Snow.

“I found out when you found out,” his mother, Nicole, said after the signing ceremony. “I really didn’t want to know.”

Both of his grandfathers were sitting on the front row in the auditorium right next to the media and all the cameras, sporting big grins in a section dominated by “Team KJ” shirts, but neither had a clue either.

Charles Henry, KJ’s dad’s father who lives in Hickory, said it would either be a school wearing red or orange, looking toward the front table where the caps of his grandson’s five finalists — Alabama, Clemson, Georgia, South Carolina and Virginia Tech — were lined up in alphabetical order between a West helmet and a football.

“I know you guys have been asking me where I’m going for two years,” the younger Henry said. “I like the surprise factor of it.”

As a large crowd of family, school and local supporters watched, Henry waited until the ESPN cameras were rolling live before revealing his choice. And when that time came, he asked beloved assistant coach Pat Murphy to come up on the stage and whispered the name of the winning school into his ear.

“Clemson University,” Murphy blurted out to a thunderous ovation as Henry removed his black hoodie to show his Tiger orange shirt. He then put on a Clemson visor and placed a Clemson hat on Murphy’s head.

“Coach Murphy, it’s just amazing how he and KJ have connected,” Snow said. “The guy from ESPN just texted me and said that was awesome,”

So how did Henry, who played in the recent Shrine Bowl game and was awarded the N.C. Sparkplug Award for his high-energy approach, settle on Clemson?

“It was just the right fit for me,” he said. “It’s a great family environment. The teammates — they’re all from a great background. “

Henry said he considered all five of his finalists right up until the final days.

“Obviously, all five teams had to be successful, and they’re all winning programs, great programs,” he said. “But for me, it was a lot more off the field.”

He liked head coach Dabo Swinney’s approach, saying that “the consistency they showed through the process is second to none.”

Henry added that the Tigers winning last year’s national championship “definitely didn’t hurt.” Clemson is currently ranked No. 1 and again in this year’s four-team playoff along with two (Alabama and Georgia) of his other finalists.

But the bottom line for him was “the opportunity and having the best chance to be successful at the next level.”

Henry, who will play in the Under Armour All-American Game on Jan. 4 and enroll at Clemson in January for the spring semester, is the third of the nation’s top five recruits to commit to the Tigers.

Swinney, in his press conference last Wednesday discussing the early signing period signees, said that “Christmas came early” for his program with the addition of Henry and the other prized prospects.

Snow said that “the sky’s the limit” in the future for the talented Henry.

“I don’t like to put a stipulation on it,” the longtime Titan head coach said. “He has unbelievable ability and potential. As a player, he is long and rangy can make up for mistakes because of his length, his speed, his athleticism.

“But what I’ll miss most about KJ is his smile and the way he treats and deals with people, which is unmatched. He comes from a great family and support system. He’s been a jewel to coach.”

And Henry, being a part of a highly successful football program for the last three years, has continued to raise the bar.

“It’s a little higher level when Dabo Swinney comes to your school and Nick Saban, all five of them,” Snow said. “That’s a big deal. This has been unbelievable for our community and for our school. I mean when you get exposure on ESPN, that’s a great thing.”