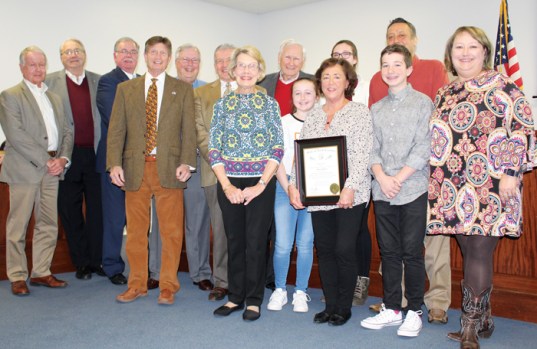 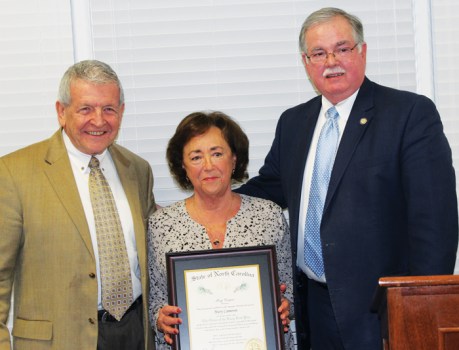 Former mayor John Bost, left, and NC Rep. Donny Lambeth asked for a governor’s awarding of the Order of the Longleaf Pine for Mary Cameron. — Photos by Dwight Sparks

For the first time in nearly a quarter of a century, Mary Cameron wasn’t sitting up front as a member of the Clemmons Village Council, but that didn’t mean that she didn’t take center stage at Monday night’s meeting.

Cameron, who served six four-year terms and 24 consecutive years on the board before being swept out of office in November with two other incumbents, was awarded the Order of the Long Leaf Pine Award – given to those who have shown exemplary public service to the state and their communities.

It is considered the highest civilian honor in the state and was presented by N.C. Rep. Donny Lambeth on behalf of Gov. Roy Cooper.

“For a person who talks a lot, I think I’m at a loss of words, which is a first, but I’ll find a few,” Cameron said. “Thank you whoever was involved in doing this. Thank you to all those of you who I served with and my family for putting up with this for years. And I want to thank the citizens of Clemmons for giving me the honor and the privilege to sit in those seats.”

John Bost, who served as mayor of Clemmons from 2007 to 2013, presided over the occasion, which topped the agenda for the new council before a packed Village Hall.

Bost said that there was a discussion after the election among other former mayors, council members and family on how to honor Cameron for her many years of service and that Susan Jones, widow of former councilman Chris Jones, suggested the Order of the Long Leaf Pine.

“These are really heroes in our community,” Lambeth said of the award and plaque he presented to Cameron. Lambeth was followed by other former mayors who offered their thoughts on Cameron.

Ron Willard, the first mayor of Clemmons, said he likes to call her “Dr. Cameron” for all the years educating people on the Village of Clemmons. “She probably knows more about this Village than anybody,” Willard said. “She’s a neighbor, and I’ve served on numerous boards with her, and she’s always prepared. If you ask her to do something, you don’t have to worry about it.”

Bill McGee said that it was his privilege to work with Cameron and that you could also count on wise guidance and opinions from her “because she never left an opinion unexpressed.” He also noted on the back wall there was only one photo of all the previous councils without Cameron’s face included.

“Mary has been here forever,” Nat Swanson said. “She’s always interested in what goes on in Clemmons. She’s always been prepared even when she wasn’t elected for anything. She had comments that always made sense.”

Ed Brewer said he had known Cameron even before Clemmons was incorporated “back during the Sewer Committee days” and repeated what the others commented about her preparation. “She does her homework, and she’s never had an agenda,” Brewer said. “It’s never been about Mary. It’s about what she can do to make the Village a better place.”