Shivering through a frigid blast 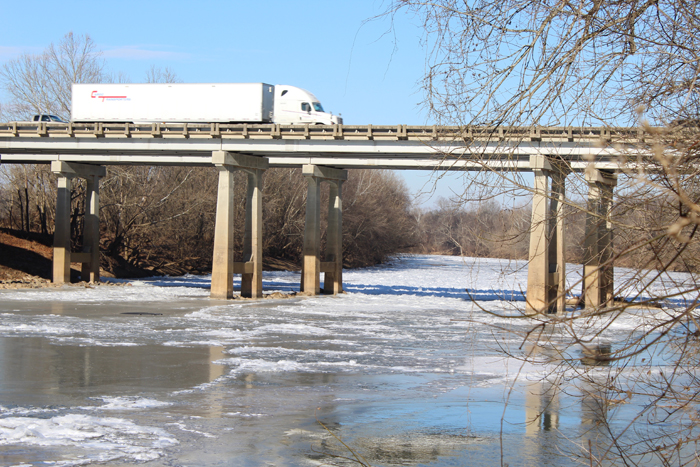 A week of frigid weather when temperatures often dipped into the single digits created an ice floe on the Yadkin River for motorists to eye as they traveled Interstate 40. Temperatures this week are supposed to warm significantly this week with rain arriving. — Photo by Dwight Sparks

When it comes to winter and being cold, I usually think about places like International Falls, Minn. But Clemmons and the Triad area? Not really… at least not until January 2018.

The first week of the new year has been brutal with temperatures constantly staying below freezing — apparently the longest stretch on record in these parts.

So this is what it feels like, sort of, up there – even though this isn’t even part of a normal winter in a place that is often referred to as the “Icebox of the Nation.” Always intrigued by the weather, International Falls has been my benchmark for cold.

The frigid city in northern Minnesota located on the Rainy River directly across from Ontario, Canada, averages more than 100 days per year with the high temperature not reaching 32 degrees. Can you imagine? Lows reach 0 degrees an average of nearly 60 days a year. Brrrrrr…

We could have even looked north to International Falls in late December to get a glimpse of what was coming our way with temperatures plummeting to -38 degrees on Dec. 28. Ouch.

I say all this to make us all feel better about what we recently experienced.

On Jan. 1 while the gas heater kept us toasty in the living room, I came across a copy of the Old Farmer’s Almanac for 2018. I thought there was only one, but then I also saw the Harris Farmer’s Almanac. I suppose there are many others as well – kind of like the old musical group, The Drifters, who seemingly have many different versions.

I always knew the Farmer’s Almanac was known for weather forecasts and thought it might be interesting to see what it had to say about the first week of 2018 in our part of the country.

In one version, from Jan. 1-7 it said rain to snow, then sunny and cold. In the other, it said temperatures would be near normal for the month and specified Jan. 1 as one of the warmest days and Jan. 3-4 among the coolest.

Not exactly on target, but it could have been worse.

They combine these elements in making forecasts, which are based on 30-year statistical averages compiled by governmental meteorological agencies that are updated every 10 years.

Obviously, they aren’t going to be able to predict what it’s going to be like every day or in a specific time range, but instead look at overall trends.

Heck, even the local meteorologists and weather forecasters such as The Weather Channel and AccuWeather sometimes have a hard enough time on a daily basis even when they have access to the current data, models and seasoned observations.

Remember that snow in early December that wasn’t expected to amount to anything and turned out to be much more than anticipated? (One of the almanacs was predicting T-storms and mild from Dec. 4-8, but that’s easier to understand how it could be so wrong for a specific weather event since those books are produced so early.)

Getting the daily forecast right is difficult enough, much less a 3-day or 7-day forecast, or even an 8-12 forecast like one local station has added.

Weather, by its very nature, can be fickle and hard to predict.

But one of the things I like so much about living in this part of the world is that we are able to enjoy all four seasons and typically are in the moderate ranges when it comes to temperatures and precipitation.

The older I get, the less I like cold weather, but we’ve since moved on from this cold snap. That’s something the folks in International Falls, Minn., won’t be able to say.