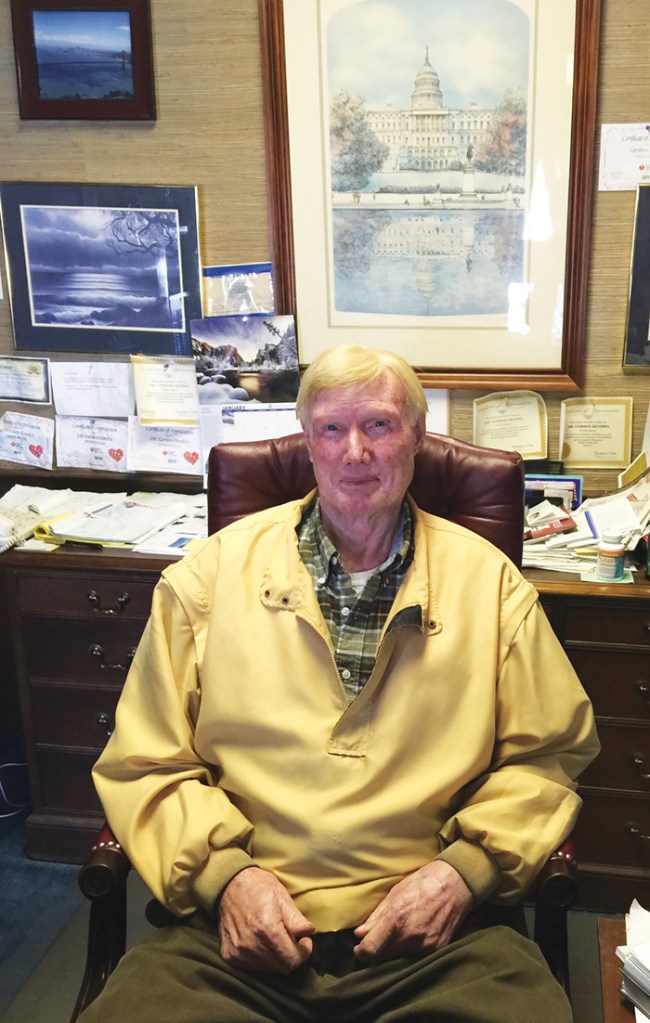 Gordon Hendrix has left his mark on Clemmons.

When Gordon Hendrix was eighteen months old, his parents had to leave the mountains of Sparta, North Carolina and move to Maryland. It was the Great Depression. The family really struggled for money. “They put a few pieces of furniture in the back of the truck. There was twelve in our family. All the kids rode in the back. I was still a baby, so I got to ride up front,” Gordon adds with a laugh, “The Beverly Hillbillies didn’t have nothing on us.”

Gordon was the youngest. While some in his family married and stayed in Maryland, Gordon came back home with his parents to North Carolina eight years later. At that point, Gordon began helping his dad on the farm. He would wake up at 4:30 a.m. to milk cows and put the milk out by the side of the road. By 7:00 a.m., he would catch the bus. Back in those days, however, the bus did not necessarily come every day. That is, if the bus came. If there was too much snow, the bus might not come by for a month. For Gordon, that meant he would be working on the farm instead of going to school. Even when the weather was nice, Gordon also had to miss school sometimes because there was work to be done on the farm.

Gordon did not need schooling, though, in order to learn the ways of the world. Gordon realized he could cut some extra pine clippings and sell those for extra cash. “I saved all of that money and bought myself a cow when I was ten. I remember — I was so excited because the first night the cow came to our farm, she had twins.” Now, Gordon had three cows to milk for the price of one. The milk those three cows produced was money in Gordon’s pocket. The milk from the other cows Gordon milked, was his Dad’s.

Gordon’s father was an important figure in the young boy’s life. In addition to being a farmer, Gordon’s father was a Baptist preacher. “My father always told me to do as you wish to be done by others. I’ve always tried to do that––treat others with kindness. I love to help people.” Gordon saw his father help people time and time again. It would be a lesson Gordon would carry with him for the rest of his life.

Tenth grade was the final grade Gordon completed in school. He then accepted a job at a General Motors plant making $100 a week. “I thought, ‘Lord have Mercy, if this isn’t a lot of money. I would even send a little bit of money back to my mother and father because I knew they didn’t have much.” Gordon, did, however, save enough money to buy a brand new 1955 Plymouth. “I didn’t need a new car, but like young kids, you think you have to.”

Gordon heard about another job with the Pennsylvania Railroad. He seized the opportunity. “I had always wanted to work on the railroad. Just something that always excited me.” In order to rise in the ranks, Gordon kept taking various tests. He eventually became a conductor. “I worked for the union; and whenever you work for the union, the person with the least seniority gets laid off. So, I got laid off and came back down south to spend time with my mother and father.” Back in the mountains of Sparta, Gordon began working for his brother who owned a hardware store. But it was at church with his parents where he met his future wife Judith. Once he married, he knew he needed to make more money to support his family. “I had enough sense to know I wasn’t going to make much money in Sparta. I didn’t have much of an education, so I knew I needed to learn a trade. Common sense goes a long way, you know.” Gordon used that common sense to learn about plumbing and heating In Maryland for a while. “It was hot water heating and baseboard hot water with old timey radiators. It was a big thing back then.”

Sparta was still in Gordon’s future, though. When Gordon’s father had a stroke and his Mom asked for help, Gordon moved back. “I thought about it and I said, ‘Well, you know, you’ve got to have help on the farm. So, I moved my family back. Judy was pregnant and about to have a little girl, Kim.” Shortly thereafter, Gordon’s mother passed. Since Gordon had been working the farm, his parents had decided to give the farm to Gordon. But he noticed his father was so sad about his mother being gone. Gordon called his sister and said he would give her the farm if she came to live with their father. “Not that I wasn’t close to my father, but she always made him happy. There is a different relationship with fathers and daughters you know.”

At this point, Gordon moved to Galax and began working at Galax Plumbing and Heating. Gordon began running big jobs and traveling a lot. Once again, Gordon used his common sense to open his own company in Clemmons. In order to get a job, you have to put a bid in. Companies take the lowest bid. Gordon usually won the bid because he would bid low. As a result, he began working on schools, the YMCA in Lexington, hospitals, jails, and churches. He also had a son named Craig during this very busy season in his life.

Next, Gordon decided to build. He built Bay Meadow Apartments in Clemmons. “Whenever I would have ten rented out, I would build ten more. Once I got those rented out, I would build ten more.” A friend approached Gordon about building apartments in Lewisville. Together they built Brookway West. “My friend’s brother came to town and wanted to own the Brookway West apartments. So, I said, ‘Sure, I will sell my share to you.’ Then, I also sold the Clemmons Bay Meadow Apartments as condos and decided to form my own finance company.”

Gordon began building the Bronze Building in Clemmons. He also started building a row of offices located near the current 2520 restaurant. “When I would get those rented out, I would just build more.” When roads were created to accommodate the building traffic, names were needed for the streets. Gordon reflects on that job, “It is hard to think of the names of streets because a lot of them are taken. I used Cephis because Cephis is my middle name.”

Just like his father taught him to, Gordon has tried to treat all of his tenants like family. “I’m the only one I know who has a ninety day walk-away clause. You don’t have to sign a contract with me until after ninety days.” Some tenants have rented out space from Gordon for more than forty years. He knows whether those tenants are having children, if their spouses are sick, or need a helping hand. Gordon is usually the first to be out there loading a truck or moving boxes. Over the years, Gordon has donated to so many causes, that he has an array of certificates of gratitude on his wall. From the heart association, politicians, and acknowledgements of help with cancer efforts — Gordon donates to many.

Recently, Gordon celebrated his 81st birthday. For his 80th birthday, however, a surprise party was thrown. “I had no idea. I was so surprised. There was 100 people there singing happy birthday.” Gordon attributes his long life to having fun and exercise. “No medicine is as good as exercise.” Perhaps a bit of fresh mountain air helps as well. Each weekend, Gordon goes up to his mountain house to take in the beauty near the area where his whole life began.

Our neighbor’s life serves as an inspiration to those who just don’t feel higher education is a good fit for them. He clearly has shown that, with the right goals and good values, so much can be achieved in a lifetime. Add good family and friends to that mix, as Gordon has, and there doesn’t seem much else anyone could ask for.