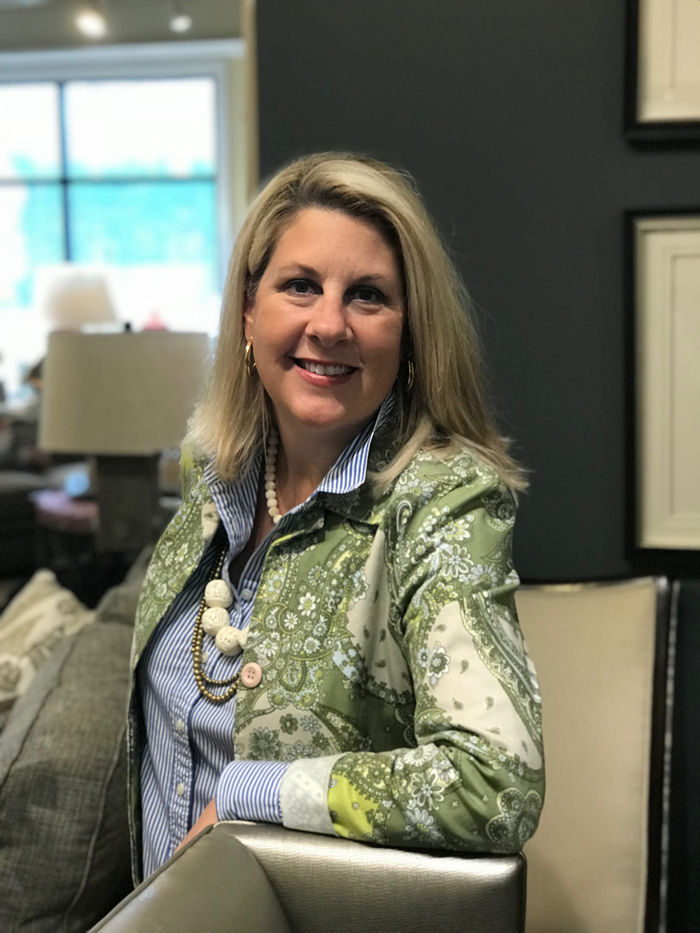 “Since my mom was from Detroit, Michigan, and North Carolina was the furniture hub — all her friends would come down and shop for furniture. She was not a trained interior designer, but I think she just had a really good sense of style,” says Meg Brown. Pictures, pillows, furniture, and any other type of interior design options, was a common discussion amongst Meg, her sister, and her Mom. “Mom loved decorating. She always thought it would be so fun to be a set designer. Meg’s mom had a lot of brass pieces. “My sister and I still fight over who gets those.”

Meg’s family moved to Clemmons West in 1977. The neighborhood was just on the cusp of growing into a well-known staple of the community. Meg also grew up with a twin, Melissa. When she is asked what it was like growing up with a twin, Meg quips, “I don’t know anything different. It was great. It was fun. There was two of us and everyone pretty much knew who we were.” Running around outside and swimming at the neighborhood pool was a blast for the twins and their older brother, Mike. However, it was a culture shock at first for their mother. “It took her some time to get used to it. My dad said he was so glad they moved to the suburb from Detroit because he felt like it was a great place to raise kids.”

The three kids attended West Forsyth High School. Meg says she still keeps in touch with other former Titans such as Keely Bridges and Kristen Esposito. Even though college would separate the friends for a couple of years, Meg and her sister decided to remain on the same path. “We both went to the same college. We shared a room because we had to share a car and we basically have the same brain,” Meg jokes. “After college, we did an internship together. We finally broke up in 1997.”

While Meg initially thought she wanted to be a business major, she finally answered her true calling by going into design. Meg and Melissa worked at Alderman’s together until Melissa got engaged. Melissa went to work for Drexel Heritage Furniture Company in the mountains with her new beau. Meg stayed behind. She got an apartment with another friend. Another girl who lived there, named Shannon, was also in the furniture world. Meg and Shannon became fast friends. As luck would have it, Shannon also fell in love with Meg’s brother, Mike. The two eventually got engaged, adding another sister for the twins to adore.

Once Meg and Davin got married, the two began to talk about opening their own store. But they had a new baby, Andrew. Meg had stopped working to be at home and worried they had too much on their plate. But the two could not brush the idea under the rug. With Meg’s design background and Davin’s retail background, it seemed a natural fit. They began brainstorming about possible names for the store. “The name, ‘Meg Brown,’ was one of the last on the list. But it got to the point where we needed a name and just used that. If we did it all over again, I don’t know that we would use that name.”

In 2005, the two started building the store. Two weeks before the store opened their doors, Meg also found out she was pregnant. “All the smells of the new store. I wanted to toss my cookies every time I walked in, being nine months pregnant. I was exhausted. I had a two-year-old at home and we had just opened this store. But then it got better. Adam came and I had to take time to be Adam’s mom.” Meg worked part-time so she could enjoy the days of motherhood. I’m still in and out because of my kids.

Meg says she has more of a maternal side than business side. In fact, she loves the people who work at Meg Brown and tries to take care of them. “Davin is here all the time, working hard. But this store would not run without the people who work here. I think they deserve all the credit. I try to take care of them because they are the reason we do well.” Meg says her boys also help at the store, teaching them about one of life’s lessons that Davin’s grandfather had taught him — the importance of hard work. Meg believes her maternal side not only influences her relationship with her sons and employees, but is also what she brings to the table when she helps folks design their home. “I have always had a sense of a house since I was little. There were some houses I would go in and it just wouldn’t feel right. It’s more than just furniture. It’s an energy. It’s a soul. There’s a feeling to make it warm and inviting,” Meg explains. “I think lighting and lamps help. I think you have to have stuff cooking in the kitchen. Fresh flowers. And people. You can find as much furniture as you want but you got to have the people.”

It was Meg’s people – her husband, mom, and her sister ––who enabled Meg to follow her dreams and open up the Meg Brown store. While Meg’s mom never got to see the store, our neighbor says she knows her mom is watching from above. It is easy to say that, like her mother, our neighbor tries to make home a cozy place to be – not just her home, but anyone else who happens into her fresh, inviting store looking for a little help.