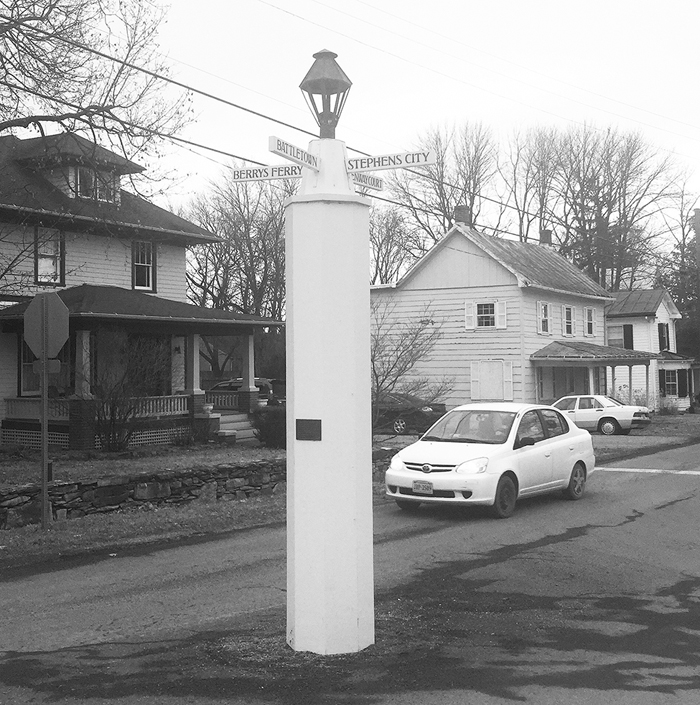 WHITE POST, Va. — Slap-dab in the middle of the road in this tiny unincorporated village is a big white post. It has been there since 1750 when it was planted by young Col. George Washington, during his surveying days.

Washington was marking the road to Lord Fairfax’s plantation. Because Washington put it there, it has stayed. They even named the village for the post. I don’t know how many drunk drivers have hit it over the years.

I don’t know how many times it has rotted and been replaced. The marker is dangerously situated, but since it was planted by the Father of the Nation, it’s there to stay. The post marks the intersection of Berrys Ferry and White Post Road. There’s little traffic here since they built the bypass.

Elizabeth and I sought out the white post on Friday en route to see three little grandchildren for the weekend.

White Post is about five miles south of pretty Berryville and so far untouched by the sprawl of Washington, DC. Seemingly, everything George Washington touched and everywhere he visited has been documented.

Old Salem visitors are shown the Salem Tavern room where he slept during a tour of the Southern states. There’s a historic marker on US 29 between Salisbury and China Grove where he stopped for water.

I have a habit of quizzing the grandchildren about school when I visit, much as my grandfather posed math questions to me as a boy. Saturday, I asked my Virginia 4th grader to recite the “3 Rs.”

Huh? I didn’t know about that one.

“Respectful, Responsible, and Ready to Learn,” she said, quoting the school motto.

I told her about the original, oldie-goldie, certified Three R’s: Reading, Writing and Arithmetic. She noted that two of those don’t start with an “R.”

The way I say them, they do.

I imaged my grandmother, Lula Ward Sparks, being among the throng welcoming Billy Graham to heaven last week. She sent every available dollar to promote his ministry and made me read his latest “Hour of Decision” magazine at her kitchen table. My grandmother lived beside us and never had a television. She would come over to watch ours for two reasons: To see the first moon landing or to watch a Billy Graham crusade. The moon walk went past her bedtime. She didn’t stay to watch Neil Armstrong walk on the moon. But she never left early when Billy Graham was preaching.

Bert Bahnson’s 1-man battle to save us