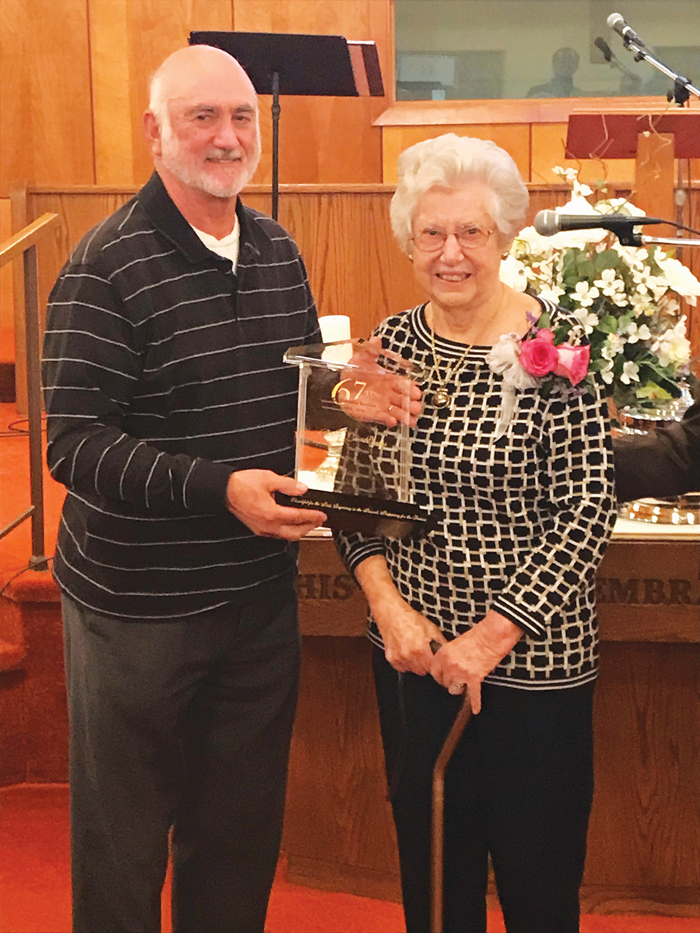 Growing up on a farm in Clemmons, Betty Phelps decided to go to college after high school. She attended UNC-G in Greensboro, which was an all-girls college at the time. Recalls one important time she was traveling to school, “I was taking a bus back to school and almost missed the bus,” says Betty. A boy named, Bob, was on the bus. He had just come back from World War II, where he had been a navigator on a B-17 bomber that flew over Germany. Bob was on his way back to N.C. State and was sitting next to his buddy. When Bob saw Betty about to get on the bus, he told his buddy to scoot over to another seat, so Betty would have to choose which boy to sit next to. Betty chose Bob. The two struck up a conversation. Bob asked Betty where she lived. “He asked me if I knew Bob, the mail carrier. I knew Bob. Everyone liked Bob,” recalls Betty. “He told me Bob was his dad, which is why they had the same name.” After Bob got off the bus, he told his roommate he had met the girl he was going to marry.

He was right. The two were married in August of 1949. They moved to a house on Hampton Road. The two also attended church. Betty accepted a position as treasurer at First Christian Church in Clemmons. “My daddy’s first cousin had been treasurer. He started getting senile. He brought us the money in a cigar box and a ledger with no balance. Bob and I counted the money and I opened an account at Piedmont Federal.” She and Bob both kept up the job as treasurer while also starting a family.

The couple had their first son in 1950. Once they had one, Betty and Bob were hooked. They had five children total. Betty stayed at home with the kids, while Bob commuted fifty miles to a job in Thomasville where he worked as Vice President of Engineering for Thomasville Furniture. “I put more miles on the car, than Bob,” laughs Betty. “Driving to scouts, ball games, and drill team, I was in the car a lot.” The kids were also outside playing with their cousins. Betty was surrounded by six other houses that contained family members. “One of Bob’s siblings had five children and the other had two. I always knew if anyone was in trouble because someone would tell. We were all on the same street,” says Betty. “On Sunday afternoons, the yard beside ours turned into a ballfield where all of the kids played.”

Betty recalls the simplicity of the time and the joys of having family in such close proximity. “Clemmons was more rural then. The support of family was very important to me. It was just a different way of living,” says Betty. “Personally, I know there are good day cares and things like that, but I really wanted to be home and know what my kids were exposed to. Bob and I knew that I would always stay home.” Betty says that Bob’s aunt was very helpful. She would come in and offer to take the children while Betty ran to the store or drove to a much-needed errand. “She just loved kids.”

Together, Betty and Bob raised all five kids. All five children graduated from college. Today, two still live nearby Betty. Three are engineers. One daughter teaches at Elon University and the other daughter is a social worker. Bob died in 2009, just eleven days shy of the couple’s 60th wedding anniversary. “My husband was a super nice fellow. We both had the same idea of how things should be done. When he really wanted something, he got it. When I really wanted something, I got it,” notes Betty of her happy marriage.

Betty and Bob did many things well together, including taking care of finances at First Christian Church for many years. In fact, this past Sunday, Betty was honored for being treasurer for sixty-seven years. The pastor talked about faithfulness. He spoke of the faithfulness Betty had shown in the church. One woman came forward to talk about how welcome Betty had made her feel when she first joined the church. Another said that the faith Betty’s children showed was an example she hoped to bestow upon her children. “I just assume not be celebrated and give all the glory to God, but my son who leads the singing and helps with Sunday school classes said it would be a witness to others and I couldn’t say no.”

“Your Neighbor” is a feature by Jill Osborn. If you have a neighbor everybody should know, reach Jill at jill.n.osborn@gmail.com. For more information about Jill, go to her website at https://JillOsborn.com