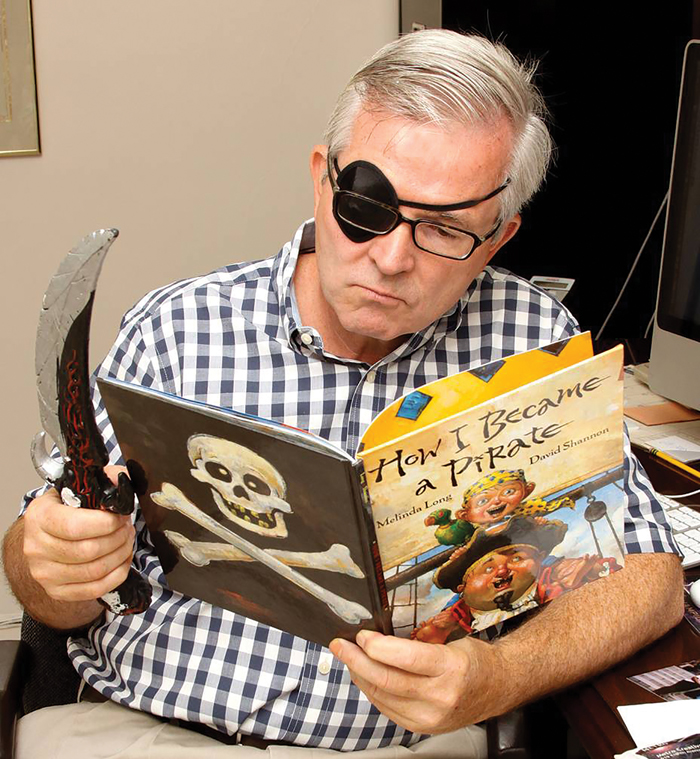 Dwight Sparks, editor of The Courier for 33 years, once posed with one of his favorite books for a Davie County Library reading promotion. He retires June 1.

Dear Reader, over the last several years, the goal of this column has been to help us know our neighbors better. To get the conversation going with others has been a hope, so if you saw one at the store, you might already feel as though you know the person a little bit or could offer a kind word. It has been a great privilege to be able to ask people about life-changing moments and about inspirational journeys. None of this would have been possible if Dwight Sparks, our faithful editor and one of the best bosses I have ever had, had not said yes. He took a chance when I pitched him my idea — my hopes, really, for this column and for our community. As editor, Dwight has shared with us many of his experiences as well. His editorials have often been full of Mark Twain-like humor and insight on the issues before our community and our nation. Given all of the opportunities we have had to read his perspective on matters, one might wonder if there are any subjects left to be explored. Well, here we are given the opportunity to see what our editor sees when he looks back over the last 33 years; what has stuck out as being very important to him on his journey to the place he now stands. This is what Dwight shared with me – and now you – about some of the memories most near and dear to his heart.

“When Mary died, this community took me in its hands and loved us in such a remarkable way, and I have never forgotten that. It has influenced everything about the rest of my career,” Dwight recalls vividly. “People talk about how they are in a fog when somebody dies and they don’t want to go to a funeral and they hesitate to visit the family. I remember everything.”

Dwight was 41 when he lost his wife, Mary. She died of breast cancer. He was left with great grief and two sons: 14-year-old Paul and 4-year-old Robert. Dwight had worked at the Salisbury Post and the Winston-Salem Journal. He had been the editor of the Madison Messenger, and to our good fortune, ended up at the Clemmons Courier. However, Dwight recollects his past as something of a steep learning curve after his wife died. “I was somewhat of a know-it-all. I was brash.” But, he notes that, once Mary passed, everything changed. “Mary’s death was catastrophic, personally.”

In almost Technicolor sharpness and emotion, Dwight can still recall the funeral, “I remember all the people standing in line. I remember who they are.” Two stand out in particular: Jerry Evans of Clemmons and the late Lee Cartner of Mocksville. “Jerry Evans came even though his son had just been killed. For him to reach out to me in the midst of his own grief was really shocking — and I knew I would get through this,” says Dwight. “Lee had MS. But he was Mary’s friend and it hurt him to stand, but he stood in line for an hour to pay his respects.”

Dwight also says he has never felt closer to God than when Mary passed.

Instantly, Dwight became a single parent, too — something that can be challenging in the best of circumstances. He recalls some of the adjustments he and his children ultimately pulled through. “Paul was tardy for school for almost a year and the school didn’t turn me into the truancy officer,” says Dwight with his trademark humor. While single-parenting was not without its difficulties, it was also a saving grace. “Robert was the most joyful child I have ever known. I couldn’t wallow in self-pity with him in the house. He just lifted me up. Paul was my pride and Robert was my joy.”

Dwight says it was not just his boys that helped breathe life back into his soul, but also the support from his fellow neighbors. “Through God’s grace and the community’s love, they lifted me out of it. And I have not forgotten that. I had more chicken pies delivered to the house than I could count. I had letters and cards in the mail every day for five weeks. None of the employees at the newspaper left for a year. Nobody wrote a letter to the editor that was critical of me for at least a year. And then one day, I had a guy disagree with me.”

That was okay, though. In his new status as a widower, Dwight’s views of the world seemed to change. Petty disagreements seemed just that — petty. “Suddenly, little arguments with the county commissioner or the school board or superintendent weren’t important to me anymore. The big disagreements mattered. But I think I matured and looked for a little more meaning in life than picking fights with politicians.” Dwight adds, “Part of my experience was I learned to not automatically say no. I learned when people say, ‘I want to write for the newspaper.’ I started saying, ‘yes, ok.’”

Dwight also decided to say yes to going out on dates. However, as Dwight admits, he made the classic mistake of marrying again too soon. “I never saw myself going through a divorce and yet I did. It really is true that the pain and embarrassment of the divorce was worth it to get Michael. He is a remarkable young man. I am thrilled with my sons.”

Today, Paul works in homeland security in D.C., Robert is a lawyer, and Michael is a student at UNC-Chapel Hill.

While things worked out for his boys, after his divorce, Dwight had given up on ever committing to a permanent relationship again. However, a friend suggested he meet up with Elizabeth, an old friend from high school. “I was, frankly, extremely reluctant to even venture that way, but I did.” Everyone immediately saw how compatible the two were, but Dwight was terrified of marrying again. Eventually, though, he could not deny what others continued to observe. Today, Dwight’s thoughts on marriage have changed and acquired a new patina. About the relationship he has with his wife, he says, “We are amazingly — and perhaps it is our maturity — but we treasure each other more than I certainly would have at a younger point in life. Elizabeth has taken me with all my warts and scars.” Dwight pauses and reflects. “But maybe they are character building.”

Dwight says it is the same with the children, “Elizabeth has embraced my sons as her own. Her daughters love me. Their children think I’m great. They call me, ‘Papa.’ Our families have blended in an uncommon way.”

The grandchildren from both sides of the families also help Dwight carry on a tradition started after Mary’s death. “We wash Mary’s grave like good Moravians. I take the grandchildren. It is a ritual to wash her grave on Good Friday and put flowers on it.” Dwight reflects, “What a gift to have children to, maybe, hopefully, mourn at your grave one day. And I’m thinking maybe they’ll wash my headstone, too.”

With Dwight’s last day at the Clemmons Courier fast approaching (June 1st), he reflects upon his life here at work in the Village. “I have been here thirty-three years and I don’t think I am smarter than I was when I started, but I sure am more experienced. Life has been, like it is for everybody, a roller coaster. I have had great highs and desperate lows.” While life has changed for Dwight over the years, he seems surprised to find some memories still feel so fresh and impactful. Perhaps it is how his sense of humor has been honed, “Something happened to my tear ducts when Mary died. Still, twenty-four years later, when I mention her name, tears well up in my eyes. It is amazing the involuntary reaction, that happens every time.”

It seems likely our kindly editor will live with that change for some time. Maybe that’s a good thing to add to one’s character. No doubt, in his retirement, Dwight will have his sense of humor with him, too, to help soften the rough edges that life throws our way. If his editorials over the years have shown us anything, it is that he will treasure the moments with his family and friends, the beauty of the fall along the Appalachian highways, and the wonder of nearly everything around him. Things like that have never seemed to wane for him. But what will we do without Dwight to hold up a journalistic mirror for all of us in which to see our community – one that has been tempered by a full life of ups and downs, observations, education, and a real interest in the people around him? Perhaps one thing we can do is think of Dwight’s gratitude for his community and for his experiences. For me, I will forever be thankful for the opportunities he gave me to explore the lives of so many neighbors I would not otherwise have met, and to share them with all of you. I will miss the wisdom Dwight acquired from experience and from watching people for decades and his effort to be as objective and intelligent about any given subject or situation as possible. That is what a good editor does. So I will be thankful.

Kurt Vonnegut once said, “The Universe needs more good editors, God knows.” Dwight Sparks has been one of the best. In fact, many of us who have worked for him would easily say, he has been one-of-a-kind.

“Your Neighbor” is a feature by Jill Osborn. If you have a neighbor everybody should know, reach Jill at jill.n.osborn@gmail.com. For more information about Jill, go to her website at https://JillOsborn.com