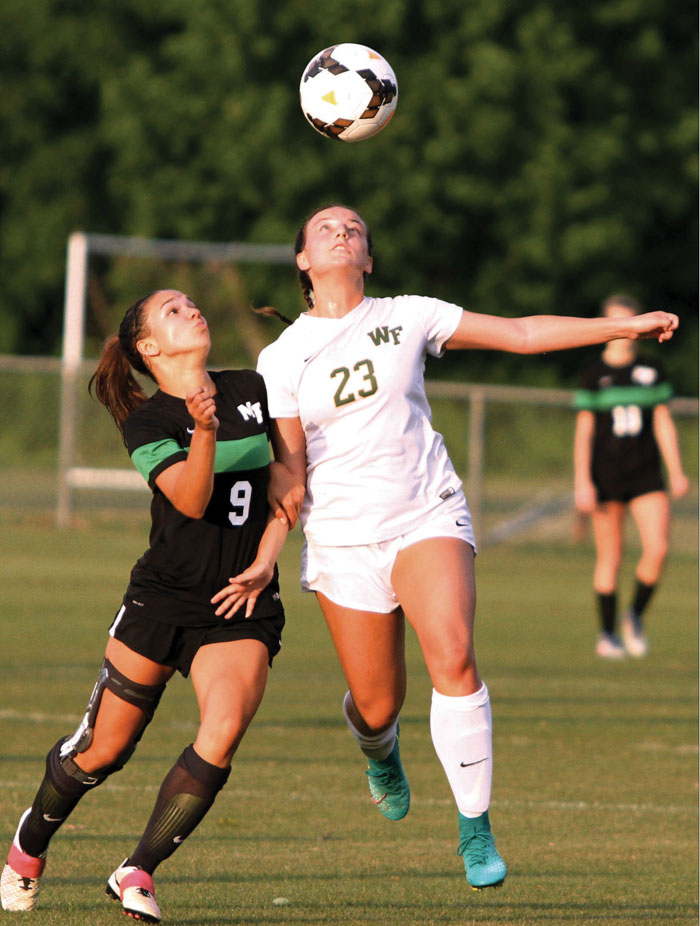 West Forsyth’s Brooklyn Berry concentrates on the ball while fending off a Myers Park player during a game last season. Photo by Chris Mackie

Brooklyn Berry accomplished nearly every goal she set for herself during a stellar four-year career for the West Forsyth girls soccer team.

Being recognized as the female athlete of the year was just icing on the cake.

“I had no idea I was getting it,” Berry said. “My mom had no idea. I’m happy that she could be there to see me get it. I heard them say my name and was in complete shock. And then they started reading off all my accomplishments the last four years, which kind of overwhelmed me. That was cool to hear, especially now that my career at West is over.”

Berry, a senior, will head to UNC Wilmington to continue her soccer career. She will leave West as the most prolific scorer in the program’s history, adding to a laundry list of other notable achievements she attained throughout her career.

Berry was all-conference in the Central Piedmont 4-A for four years, including Player of the Year honors in 2015, 2016, and 2017 and was selected to four straight all-state teams. She finished with 149 goals scored during her career, shattering the old record of 114 established by Alison Price, who graduated in 2014.

Berry also broke the single-season scoring record with 58 goals during her junior year in 2017 — the same year she helped lead West to the NCHSAA 4-A state championship — eclipsing Price’s previous mark of 43.

“Every year before the season, Coach Bilton would ask all of us to write down one personal goal and one team goal,” Berry said. “Mine were always the same. I wanted to break the scoring record and I wanted to win a state championship. The fact that I accomplished all three of those in one year is pretty special.”

The totals may have been even higher had Berry stayed healthy. She estimates that she missed anywhere from 15-20 games during her career because of a variety of injuries.

“I broke my elbow my freshman year and when I was able to get back, suffered a concussion and missed some more games” she said. “My sophomore year, I tore my hamstring and was out because of that. This year, I had some more hamstring issues and another concussion. My junior year was really the only year I made it through the season without many serious issues.”

Berry is also blind in her left eye. She started having issues with her sight in eighth grade.

“I had started losing vision in my left eye and one day it was really bloody,” she said. “My mom took me to the doctor and he told me I needed to be at the hospital later that day to have surgery or I was going to lose vision in that eye.”

Half of her retina had been torn off. Doctors told her it could have been that like for quite some time and they had no way of knowing how long it had been like that.

“At that point, I’d broken my nose and had several concussions, and throw in all the head balls that have come my way in my career playing year-round, and the said there was no way to tell when exactly it happened,” Berry said.

“I had the surgery and they put in a new lens,” she said. “My body rejected the lens, and they can only perform that kind of surgery one time. I just had to learn to live with it and adjust to it, which was really difficult my freshman year. I had lots of depth perception problems. It used to be that when the ball would come my way, I could see it and stick my foot out, but it was still several yards away. Now I don’t really think about it. I’ve learned to adapt and have grown with it.”

Coach Scott Bilton appreciates the growth the Titans have had during Berry’s career.

“She came in and took us to the next level,” Bilton said. “It was a seamless transition right after Alison (Price) graduated, then having Brooklyn come in. They are both prolific scorers who require a lot of attention from defenders, which frees up some of our other players to perform at a high level.  We knew Brooklyn would have an impact on our program when she got here. It didn’t take too long after we started playing to see exactly what kind of impact we got.”

Soccer has been more than just a sport for Berry since she started playing when she was 3.

“It’s a lifestyle,” Berry said. “I don’t remember a time when I wasn’t playing. Everything I do is planned around soccer. All my best friends are from my soccer teams. My family is so supportive, and they enjoy watching me play. It’s a job but it doesn’t feel like it. It’s a game that means everything to me and I look forward to my next chapter.”