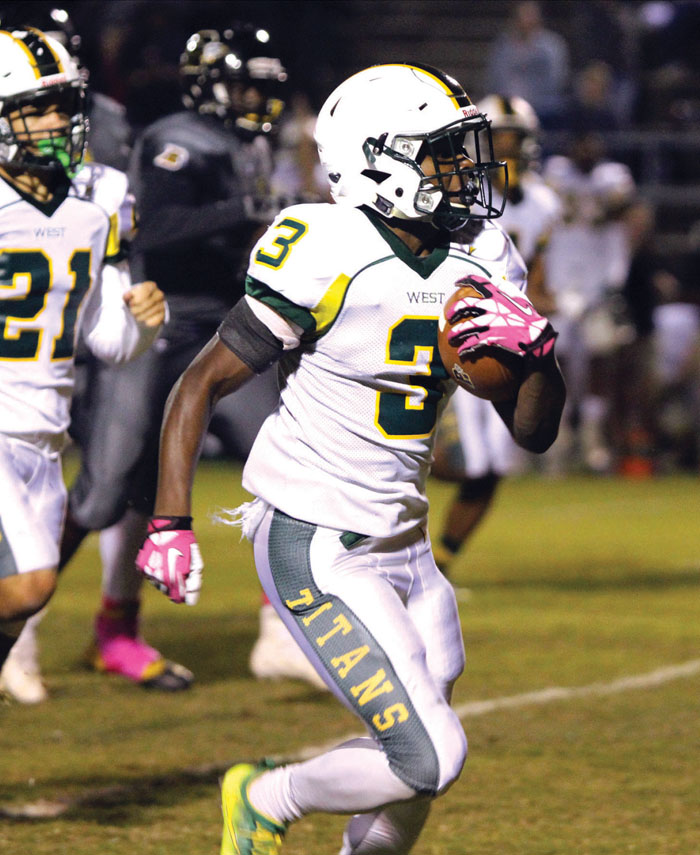 West Forsyth’s JaQuan McMillian returns an interception for a touchdown during a game last season against Reynolds. Photo by Chris Mackie.

Ja’Quan McMillian has made a name for himself for his ability to recognize and disrupt developing plays on the football field as a member of the West Forsyth secondary. McMillian also has a penchant for providing dynamic and often momentum-changing punt returns, noting his ability to see the field as the play unfolds.

But McMillian, a junior, was blindsided recently when he learned he was selected as the male athlete of the year at West Forsyth.

“I was just sitting in the stands watching Awards Day,” McMillian said. “Coach (Adrian) Snow didn’t tell me, but he did tell my parents I was getting it. When I walked in the gym that day, I saw my parents sitting there and asked them why they were there. Then they called my name and told me I won, and I was shocked. It’s a great honor to win it. It will keep me humble and hungry.”

McMillian enjoyed a third straight season as an all-conference performer in the Central Piedmont 4-A. He recorded 44 tackles, 15 pass breakups and three interceptions this season. He now has 16 career interceptions, two of which he has returned for touchdowns.

The 5-foot-10, 175-pound defensive back is drawing heavy recruiting interest from the likes of Wake Forest, North Carolina, Syracuse, West Virginia, Tennessee, Louisville, East Carolina, Appalachian State, and Coastal Carolina. He plans to follow in the footsteps of former teammate K.J. Henry by graduating from West early and starting college next January.

“I love to hit and I’m a ball hawk,” McMillian said. “I am a pretty aggressive player and love everything about the game. I started returning punts regularly during my sophomore year and it added an element to my game. It shows people you have good vision if you can find the ball, adjust to it, and do your thing. It can definitely take you out of your comfort zone, but you learn to relax and just go with it.”

McMillian credits his work ethic for his ability to make big plays during games.

“I put in a lot of work when people aren’t watching,” he said. “When the lights come on Friday nights, my off-the-field work shows up on the field.”

McMillian also started running track this season, giving up a promising basketball career to do so. He competed in the 100, 200, 4×100 and 4×200 relays and the long jump.

“Coach Snow thought it would be a good idea for me to do it get faster and improve my speed,” McMillian said. “Everywhere I go, people would say that DBs need to be the fastest on the field. So, I decided I needed to give up basketball to get faster. The first time I ran the 100, I ran in 11.5 seconds. By the end of the year, I was running 11 flat. I thought I had a fairly good season given that I had never done track before.”

McMillian credits his father, Stephan McMillian, for instilling his love of football in him.

“My dad is always pushing me to be better,” McMillian said. “He saw something in me that I didn’t see in myself. I wasn’t even thinking about playing varsity my freshman year, but when I got here and started to show what I could do, I developed trust with the coaches. It was nice to make varsity as a freshman, so I could play with my older brother for a year.”

McMillian already has his sights set on his senior season. He will begin the process of finalizing a list of colleges that are recruiting him so that he can visit them. He’s also hard at work on getting better.

“I’ve been doing some technique work in the sand to work on my foot speed, to help with get out of my break quicker and help with my explosion,” McMillian said. “My No. 1 goal is to win a state championship. I want to be a captain this season and hold my team together. I’m ready to be more of a leader and I want to see us go out on top.”