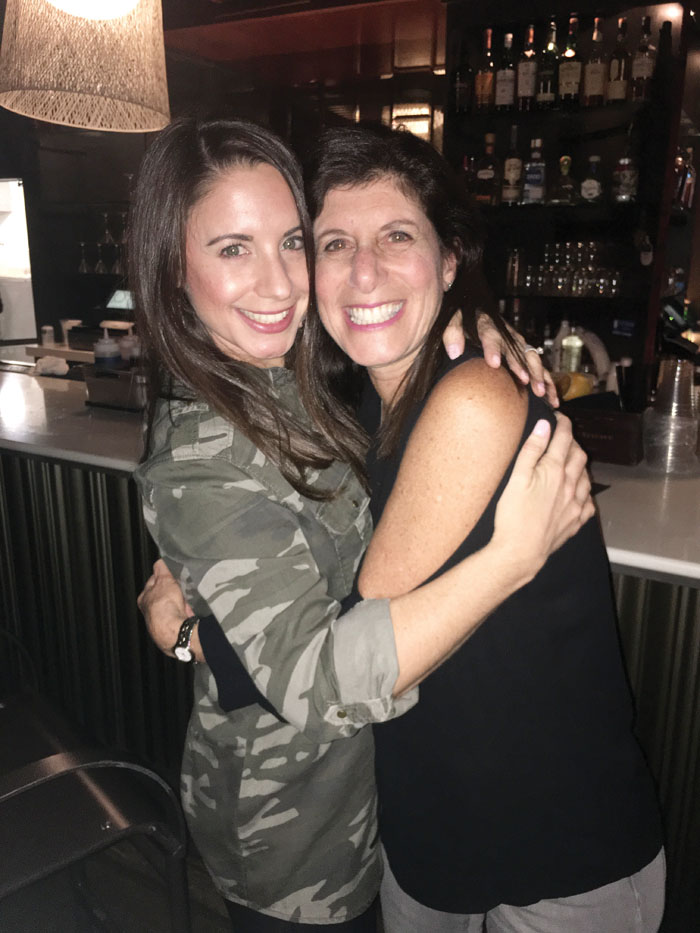 Joanne Floch and her daughter, Jenn.

Joanne Floch grew up on Long Island in New Jersey, and her thick Jersey accent is still present today. When Joanne married, she had a daughter, Jenn. Five years later, Joanne and Jenn’s father divorced. Joanne met her present husband when Jenn was 7 and by the time Jenn was 12, they were all moving to Clemmons. “Jenn was not happy and it was hard to move from family, but it was more cost effective and would be a nice lifestyle change. My husband had a job opportunity,” Joanne recalls. Joanne’s husband has two daughters. But the newly-married couple also added two boys to the brood, Alex and Mitchell. While Joanne was busy blending her family, Jenn wasn’t so sure she would stay forever. That changed, Joanne says. “Jenn always said she was going to move back to Jersey, but after she met Miles her senior year, I knew she wasn’t leaving.”

Miles Andrews and Jenn married after dating for ten years. They soon gave Joanne her first two grandchildren, a boy and girl. During her first pregnancy, Jenn discovered a bump on her right foot, about the size of a pea. After recuperating from a C-section and then finding out she was pregnant again shortly afterwards, Jenn never had the bump looked at by a doctor. During her second pregnancy, the pea-sized bump grew to the size of a golf ball. After her second child was born, doctors did an MRI and then a biopsy, which showed the bump was benign. Only after it was removed did the pathology show it was a low grade myxoid sarcoma.

According to SarcomaOncology.com, myxoid sarcoma is a rare and complex form of cancer. There are few to zero symptoms until the tumor has grown to an advanced stage. Luckily, in Jenn’s case, it was caught early. “She went for her scans every three months for the first year and every six months the second year. After that, she graduated to once a year. On the third year, it was back. This time, the scan showed the myxoid sarcoma all over the top of her foot.” Chemotherapy and radiation were not an option because there is little to no tissue in the foot. “Jenn was offered a medical remedy that was hard to hear and to process. The doctor told her if she wanted it to never come back, then she needed to amputate. Jenn called me hysterical,” says Joanne. “Part of me is wanting to be very positive for her but it also broke my heart because she is falling apart and all you can do is whatever you can for your child to help them.”

Jenn slumped into a depression accompanied by anxiety. “She went from a happy, bubbly person and turned into someone taking anti-depressants and anti-anxiety medication. She literally did nothing,” says Joanne. “I did whatever I could for her. I was here and I would try to talk to her and play with the kids and keep them busy and take them to school and pick them up. Sometimes Jenn would get out and sometimes she wouldn’t.” One day, Jenn admitted to her mom that she could not go through with the amputation. Joanne asked Jenn, “What if it was me?” She said, “I would drag you to the hospital and tell you to do it.”

As part of the process of dealing with her diagnosis, Jenn looked for support in different areas. Joanne and Jenn decided to fly to Houston, Texas, to get a second opinion. “We were very disappointed. This was supposed to be the best place in the country and they didn’t even look at her foot.” The conclusion, nonetheless, was the same based on the diagnostic tests that had been done. Jenn also took to social media. She posted a video on Facebook letting friends and family know what was going on. On the day of her surgery, Jenn asked everyone to move for her. The video went viral. Friends made shirts and bumper stickers that read, Move for Jenn.

“It really helped her the day she went into the hospital. She was in such a positive mindset the day Miles and I took her. She was a different person. She was positive and she was like, ‘I am going to get better.’ She had hundreds of messages all day. When she got out and got in her room, her phone rang nonstop. People were sending her messages all over and it was really good for her.” The news stations picked up her story and word started to spread throughout Charlotte. Other news outlets in the country began running her story as well, including People magazine.

Today, Joanne says her daughter is doing really well considering the major surgery she underwent. “She is definitely ahead of the game in doing things. But it is hard to see her in pain. Every time they make her a new socket, she feels uncomfortable and in pain,” observes Joanne. “Until her leg stops changing, they keep making her temporary sockets.” There are also a lot of new and ongoing expenses. A prosthetic that looks like a real leg comes with a hefty price tag of around $20,000. Plus, Jenn needs a blade for when she works out. At a cost of about $4,000-$5,000, that isn’t cheap either. Jenn needs a prosthetic that is waterproof so that she can enjoy the beach and pool with her two toddlers. She also needs to buy a socket for each prosthetic. And finally, the prosthetics need to be replaced every three to five years. “Other costs include $1,500 for driving lessons to learn to drive with her left foot. She has to pay to install a left pedal in her car which is $900. She had to hire a nanny to help with the kids,” says Joanne.

From a mother’s standpoint, Joanne admits it is upsetting to see her daughter struggling, even if Jenn is ahead of the game. “It is hard to see her on bad days. She can’t jump out of bed to let the dogs out. Taking a shower and getting ready might take us twenty minutes. It takes her at least an hour and fifteen minutes,” says Joanne. “It is difficult. You never want your child to go through anything horrible, let alone this. Here she was young with two little kids.” However, Joanne adds, she thinks her daughter is very strong, a wonderful mother and after some time, will be unstoppable. “I think Jenn will do everything she wants to do. I am very proud of her,” says Joanne.

Our neighbor has been traveling to Charlotte to see her daughter weekly. She has now cut back to three days a week, Tuesday through Thursday. The dedication to her daughter is perhaps one of the greatest contributing factors to Jenn’s strength. There is the old adage that says, ‘Behind every great man there is a great woman.’ But perhaps behind every strong woman, there is a strong and loving mother.

To donate to Jenn’s cause, go to: https://www.gofundme.com/move-for-jenn/donate