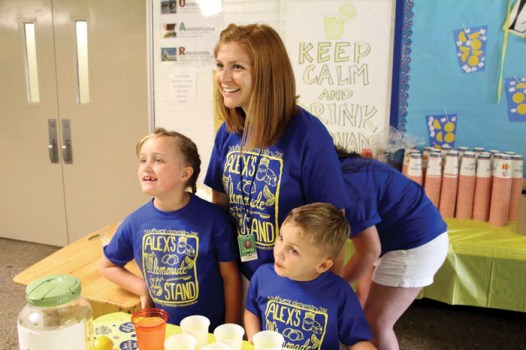 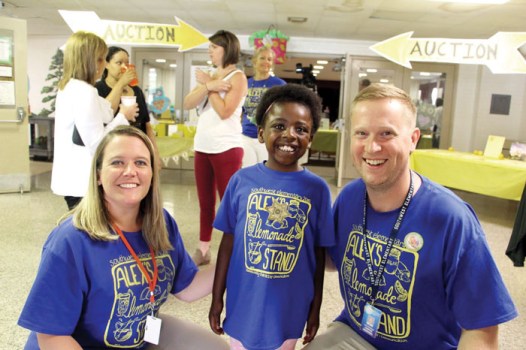 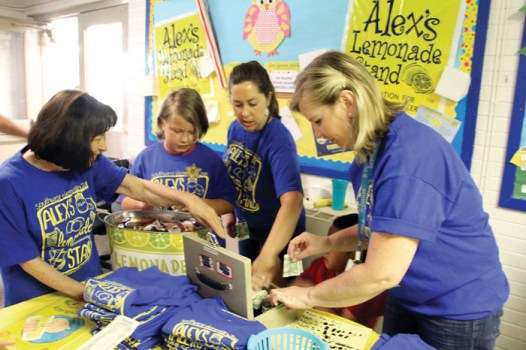 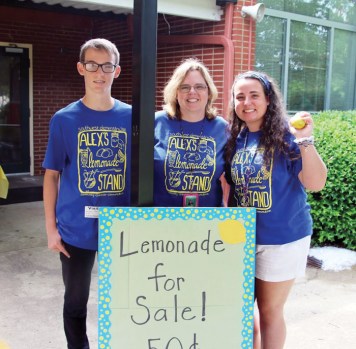 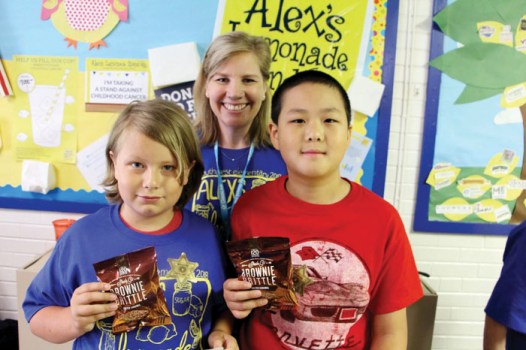 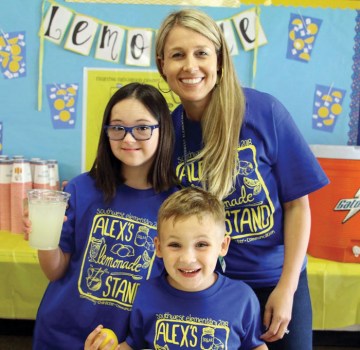 She likes the students and teachers at Southwest Elementary, too. They’re all nice.

One day, Melia would like to be a professional gymnast. In the meantime, she can tell you all about the three Cs — community, character and communication.

Melia is really good at communicating with her smile.

Recently, Melia was one of the students participating in the seventh-annual fundraiser that Maria Vernon has organized to raise money for the Alex’s Lemonade Stand Foundation, which supports the fight against childhood cancer.

Vernon and the students had lots of help from people at the school and from throughout the community.

“We are so proud of the kids and our school,” said Vernon, who is speech/language pathologist. “We have so many volunteers who make this possible.”

Lots of people were there. Superintendent Beverly Emory dropped by. Many parents and other family members were there, too.

Scott and Laura York were there to buy a cup of lemonade from their daughter, Natalie, who is in the Exceptional Children (EC) Readiness program. Scott York, who is a detective with the Winston-Salem Police Department, already had the day off, and Laura York, who teaches english at West Forsyth, was able to scoot over for a few minutes.

“I wanted to support Natalie,” she said. “Natalie loves the lemonade stand.”

Tina Hall was there to support her daughter, Kenion-Marie Hall, who is also in the Readiness program. Asked whether her mother was the best mother anywhere, Kenion-Marie said that she is.

Christina Jones was there with her children. Jones has been coming to support Alex’s Lemonade Stand each year ever since Joshua, who is now a sixth-grader at Jefferson Middle, was at Southwest.

Tristan and Chloe are relatively new to Southwest. Tristan is in kindergarten, and Chloe is in pre-kindergarten. Chloe already knows she wants to become a law-enforcement officer when she grows up. Asked whether she would like to have her picture made with Andrew McGavic, who is a deputy with the Forsyth County Sheriff’s Department, she said that she would.

Even though lemonade officially cost only 50 cents a cup and the brownie brittle cost only $1 a bag, an adult might hand a $5 bill to the student taking money and say, “Keep the change.”

Others supporters sent in straight donations. Custom-designed T-shirts were sold. And businesses and organizations throughout the community donated items for the silent auction.

“It’s definitely gotten bigger, and I think it has reached the public a lot more,” said Lori Allen, the EC Case Manager at Southwest.

Allen had invited her daughter, Darby, who is a senior at West Forsyth, and son, Donovan, who is a seventh-grader at Meadowlark Middle, to come over and help.

As she does every year, Tracy Krell of Tracy Krell Photography was on hand to photograph all of the fun.

The EC students participating were in the Pre-K, Readiness, Core I and Core II programs. In addition to raising money for the foundation, the project offers all sorts of benefits for the students, said Readiness Teacher Meredith Tuttle.

“It’s a great communication tool for them,” she said.

In recent days, she said, some of her students had been going up to people to let them know that the stand would be opening.

“They have been walking around people asking people if they want to buy a lemonade,” she said.

Mary McDaniel, who is a speech/language pathologist, has also seen how the project helps students practice their social skills.

“I really like being a part of this,” McDaniel said.

Students in other programs at the school also participated. Max Robinson and Kevin Bi, who are third-graders in the HAG (Highly Academically Gifted) program, were selling brownie brittle.

Max said that his favorite part was “seeing the smile on people’s faces.”

Vernon’s mother, Elaine Poindexter, was there as a volunteer. She described the brownie brittle as “addictive” and predicted that she would have bought a number of them by the end of the day.

Jennifer Kerr, who is with the EC Assistive Technology program, also thinks they are quite tasty and predicted that the contents of the three cases of brittle on hand would be long gone by the end of the day.

“They are amazing,” she said.

“This is just a wonderful event,” Kerr said. “My most favorite part about it is seeing the joy on the children’s faces.”