Strong season: Weiss wraps up sophomore year at UNCW with a flourish 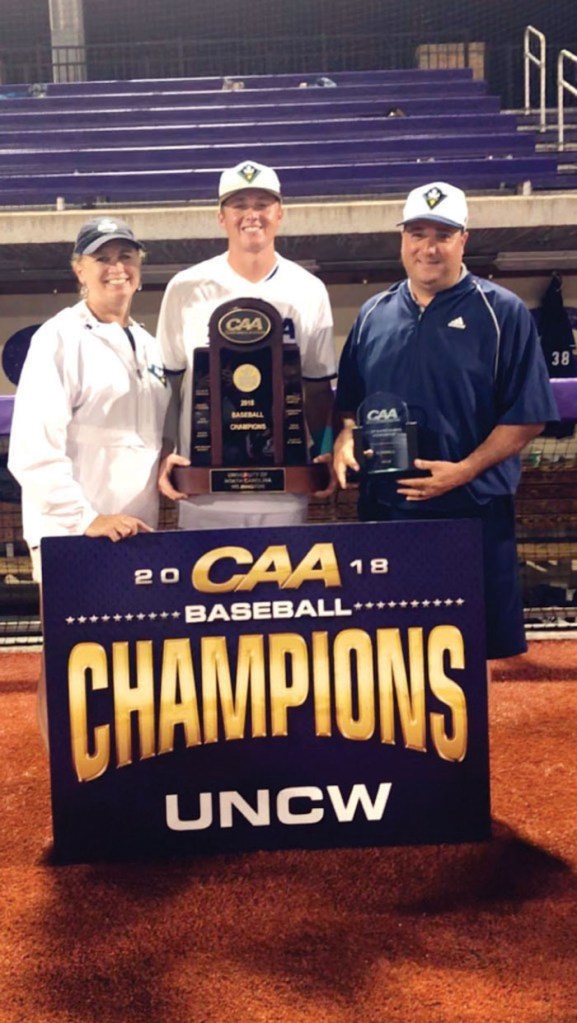 About the only thing Cole Weiss didn’t learn in the game of baseball during his days roaming the fields at Southwest Little League were the nuances of launching himself into dogpiles.

Weiss, a sophomore at UNC Wilmington and Clemmons resident, got his first opportunity to join in the celebratory display after helping lead the Seahawks to the Colonial Athletic Association Conference Tournament championship last month, when he was also selected as the tournament’s Most Valuable Player.

“I had never had the chance to be in a dogpile before, so it was a lot of fun,” Weiss said. “If it happens again, I think I learned to get there a little later so that you are one of the last ones to jump in there. I was in the middle of this one and it was painful. But it was definitely a moment you can never forget.”

It was a joyous pain for Weiss and his teammates, who entered the tournament as the No. 4 seed and needed to win to advance to the NCAA Tournament.

Weiss, the starting third baseman, provided plenty of pop in key moments for the Seahawks along the way with a .474 batting average during the conference tournament.

He provided the clutch hit in the first round against Delaware, where he doubled off the right field wall in the bottom of the ninth inning to drive in the winning run in a 2-1 win. Weiss had three hits and both RBIs in that game.

In the championship game of the tournament, Weiss broke a 3-3 deadlock with a two-run single in the sixth inning that helped propel the Seahawks to a  7-4 win and their fifth conference championship.

“We worked throughout the fall and spring to be prepared for moments just like that,” Weiss said. “Those hits aren’t possible without our pitching staff and our bullpen holding those guys from scoring runs. We had 35 guys out there that contributed to that championship and to those hits. That’s how I look at it.”

UNC Wilmington earned a berth to the NCAA Tournament and was assigned to the East Carolina Regional, which also featured South Carolina and Ohio State.

The Seahawks fell one game short of advancing to the Super Regional, losing their elimination game against South Carolina 8-4 to finish the season 39-23.

“Now that we’ve had a taste of it, we definitely want back,” Weiss said. “We want to be back in a Regional next season and get to a Super Regional, and ultimately, get to Omaha (site the of College Baseball World Series).

After seeing spot duty playing shortstop as a freshman, Weiss started all 62 games this season at third base for the Seahawks and hit .264 with four home runs, nine doubles, and 29 RBIs. He had 16 multiple-hit games and led the team with a .417 average in the postseason, which includes the East Carolina Regional games.

“I knew that last year I was going to have to wait my turn,” Weiss said. “Both of our third basemen graduated, and I knew there might be a chance to earn a spot in the infield. Playing behind those guys last year taught me a lot about my preparation for this year. The helped paved the way for this year for sure. And I think my confidence was key the whole season once I got adjusted to everything. You play a lot more games during a college season than you do during high school or showcase ball, so learning how to take care of your body is a part of that process.”

Weiss grew up playing on the Southwest Little League fields under the tutelage of his father, Ed, who played college baseball at West Virginia and coached at Mount Tabor before becoming the principal there.

“I started T-ball when I was about four and played there through junior ball when I was twelve,” Weiss said. “I learned everything I know about this game from my dad and that’s a special bond to have with him. We were at those fields all the time, probably five or six times a week. There were days I would just go over there and hang out even if I wasn’t playing. I grew up on all those fields and that’s where my roots will always be.”