Your Neighbor: Finding her niche: Beth Tysinger has a passion for teaching, taking care of others 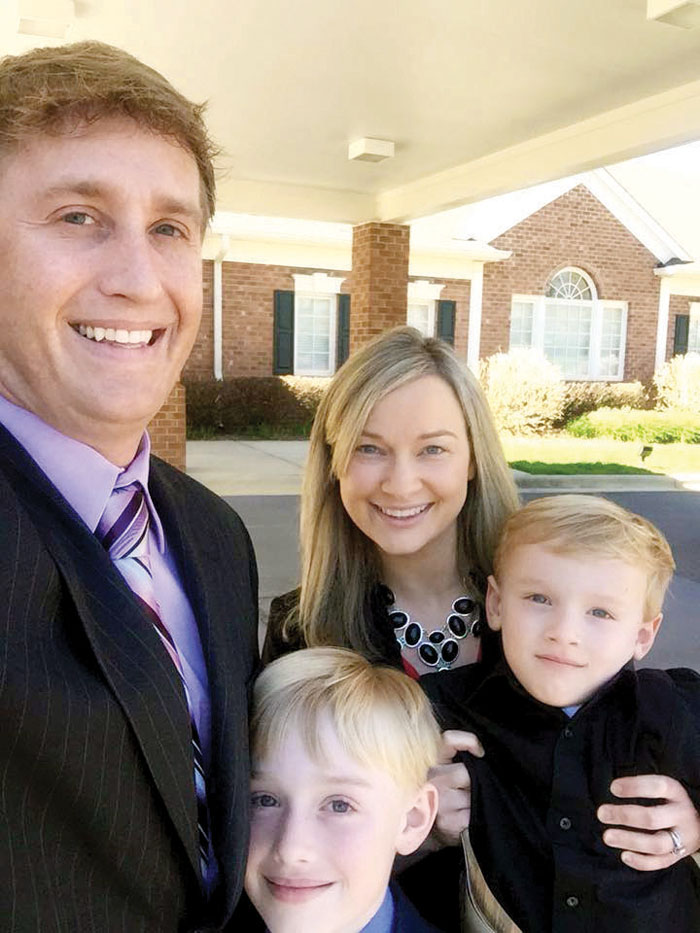 Beth Tysinger with her husband Patrick and sons Noah and Jacob.

Beth Tysinger was the second oldest of four kids until another sibling came along when Beth was sixteen, making her the second oldest of five. By today’s standards, a family of seven may seem large. However, from the outside looking in, it may not be just the size that made Beth’s family life seem a little atypical. Beth’s father is blind and her younger brother, Paul, has special needs. He will always live with Beth’s parents. However, in Beth’s household, no one was treated differently than the other when she was growing up. For Beth, it was just normal.

“My mom and dad met at a singles mixer at church. My dad has been blind his whole life, but he worked in social security. He is so smart and so funny. After storms,” Beth laughs, “he would go out even though he is completely blind and cut down fallen trees with a chainsaw.” Beth says when she calls him, her dad will say he is watching the basketball game or reading a book. “He is obviously not watching it, he is listening to the TV or listening to a book. He’s such a historical phenom. If my kids ever want to know information, he already knows about it. He can’t throw a ball with them, but he finds other ways to do what’s important with each one.”

When Beth was younger, she looked up to her brother, Rob. Rob was very smart and knew he wanted to be in the medical field. “Sara was very sweet and disciplined. Paul was the funny one and just Paul, the guy we loved,” Beth describes. “It was just the four of us for a while until Jane was born when I was a teenager. So for a long time it was hard for me to know my place,” says Beth. “I learned how to ride a motorcycle which was not par for the course in my family. But I was also a high school cheerleader and in youth group.”

Someone Beth did pay attention to during her youth was her mom. “She was strong; she had to be. She was soft spoken, as I now remember her. She would dote on us and say things like; ‘You know who I love? You are so special. God made you to be someone amazing.’” Beth looked up to her mom. Her mom received a master’s degree as a teacher, and was the only driver in the family. “She went to nursing school when we were teenagers,” says Beth. “My mom is amazing.”

Even with such strong role models in her house, Beth was confused about where she wanted to go in life. “After high school, I couldn’t find my niche. I went to nursing school and paramedic school. I finished nursing school and started working in ER at 23. That was the time I thought I was supposed to be a lawyer.” Beth went to law school at a small school in Virginia. She recalls one occasion, she came home for a break right before exams. She went for a motorcycle ride. “I was still trying to find my identity. That’s when I met Patrick. So I’m glad I did ride motorcycles.” Patrick and Beth kept in touch as Beth went back to take her finals.

After that year of school, Beth decided not to go back to law school. It was because of something she heard in church. “I kept praying, examining what am I supposed to do. I went to church and I remember my pastor saying, ‘If you are really trying your hardest and you are not doing well, you may not be in God’s will. I really just wanted to be a wife and a mom. A lawyer was not what I was supposed to be doing.”

A year later, Beth and Patrick got married. They had a son, Noah, and Beth went back to nursing. Beth had initially started as an ER nurse, but then transferred to the Intensive Care Unit. She felt she had finally found her niche. “I so enjoyed it because it was so precise and meticulous. You get to take really good care of really sick people.” Beth wanted to do even more. She wanted to educate other nurses. She went back to school. She had her second son, Jacob, right before exams. “I think a day or two after he was born, I took my final exam in the hospital.”

Beth graduated in May of 2013 and then began school again in the fall of 2013 at Chapel Hill to become a nurse practitioner. “I went back to school the first time so I could teach other nurses. The second time, I went back so I could be a nurse practitioner.” One paper Beth wrote while she in school was the importance of the nurse’s role before a patient coded. Beth says there are warning signs 24 hours in advance of the body starting to shut down — signs that can help save a life if they are noticed by the nurse. “I push nurses not to rely on the machines —  but taking accurate vital signs, using the stethoscope and paying attention to details.” For instance, says Beth, these are characteristics of unnatural behavior, “They breathe faster. A person in a hospital bed should not be huffing or puffing. You should count how many times they breathe in a minute. If it is 18 in a minute and then 24 times in a minute, you need to say something. If the heart rate gets a little bit faster, or O2 gets lower, or they get sleepier than normal. It’s important to listen to the patient’s lungs.”

Today, Beth has found a perfect balance with her family, life and work. She teaches 20 hours a week at UNCG and works as a nurse for 20 hours a week. “I was able to work out a faculty practice plan. I was able to get UNCG to partner with Baptist. It worked out wonderfully. It is something physicians do but nurses usually don’t. But they should!”

As it turns out, Beth’s older brother, Rob, became a physician. Beth’s younger sisters, Sara and Jane, became ER nurses. “I followed in my mom’s footstep,” says Beth. “My mom always seemed to be medically inclined. Even when she was a teacher, I was learning about first aid. My medical prowess came from my mom. But I think for my mom, it came from having a special-needs son.”

Perhaps, like her mother, nursing, teaching and taking care of family goes hand in hand for our neighbor. Each aspect of her life seems to complement the other.  It seems she has finally found her niche.