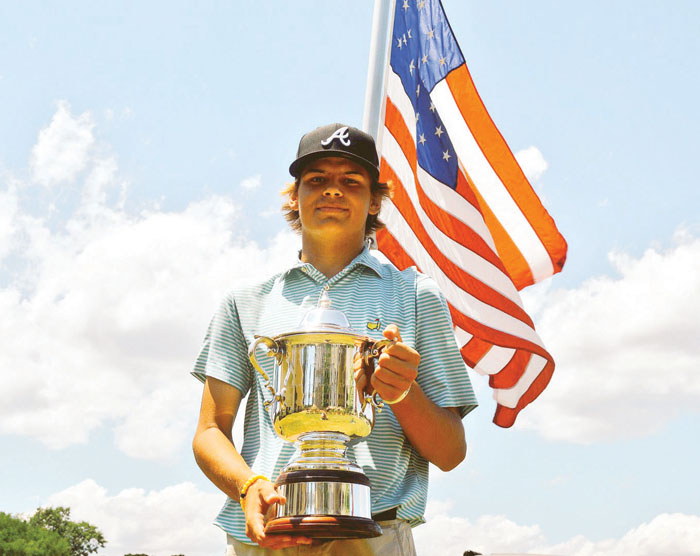 At long last — several years and 136 holes last week — Brandon Einstein of Clemmons finally won one of the coveted Carolinas Golf Association titles he has been longing for.

Einstein outlasted the competition at the North Carolina Junior Boys’ Championship at Pine Island Country Club in Charlotte last Friday, capturing the first CGA Major of his career with a 7 & 5 win against Lansdon Robbins of Davidson in the final to cap a grueling week of competition in severe heat and humidity.

“Some of my friends asked me what I was going to do to celebrate when I got home,” Einstein said. “I told them I was going to sleep for about two days. I really don’t have the words to describe it. It’s an honor for me that my name will go down with all the other great players who have won this championship.”

Einstein said that his strategy all week was to “hit fairways and greens.”

“My dad (Greg) told me to be sure to make plenty of pars and just make sure I make it to match play,” Einstein said. “I made five birdies and 13 pars, shot 66 and was the third seed for match play.”

Einstein found himself one down at the 14th hole after Childress birdied holes 7, 8, 10 and 11.

Einstein won three straight holes at 15, 15, and 17 to close out the 2&1 win. The championship match was scheduled to begin at 12:45, but Einstein and his competitor both agreed to begin play early.

“I had a lot of momentum coming off my semifinal win and won the first two holes with pars,” Einstein said. “I kept my momentum and shot a 31 on the front nine and was 9-up at the turn. On 11, a drivable par 4, my ball actually flew into the hole and popped out to about a foot, which I tapped in for eagle. Then I won the next two holes to go 7-up.”

The championship moment was almost anti-climactic. Robbins faced a putt for bogey and Einstein had a par putt.

“He kind of looked over at me like he knew it was over and told me ‘that’s good’ and I picked it up” Einstein said. “I didn’t even get to make the putt to win it. I turned to my dad and just kind of did a double fist pump when I realized I won.”

After a few close calls recently, including a runner-up finishes at the North Carolina Amateur the previous week at River Landing in Wallace and the Dogwood Invitational last summer, Einstein made good on a promise he made to his parents earlier this year.

“I told them both that I wanted to win a CGA major before I was done with junior golf,” said Einstein, who has signed to play golf at High Point University and will report to school in mid-August. “I’ve got a few more events on my schedule this summer before I go to school, so I’m not quite done yet.”

Einstein will represent the Carolinas team in the Carolinas-Virginia Invitational, a Ryder-Cup like format that pits a junior team from North and South Carolina against one from Virginia. He’ll also play in a qualifying tournament for the U.S. Amateur in mid-July that will be held at Oak Valley in Advance.

Einstein has quite a resumé during his junior golf and high school career. He played at West Forsyth his first three years before transferring to Forsyth Country Day to finish his final year of school.

“I was going to reclassify at FCD, but then High Point let me know that had a spot for me, so I decided to remain the class of 2018,” Einstein said.

He was a two-time all-conference performer at West and was the Central Piedmont 4-A Player of the Year in 2017. He won the Forsyth Junior last summer and finished second to Uly Grisette in the Forsyth Amateur a few weeks later. And during the spring, he was the state runner-up at FCD in the NCISAA 3A state golf tournament, losing in a playoff.

He attributes his success in golf to his father and grandfather (Freddie), both accomplished players themselves, as well as his instructor, Kelly Phillips, who teaches at Gillespie Park in Greensboro.

“To have that knowledge to draw on from them has been a great benefit,” said Einstein, who recommitted to playing golf full time when he was 12. “I really have no words for all the influence and impact they have had on my development.”