Fast fish: Zuleger motivated to stay ahead of the competition 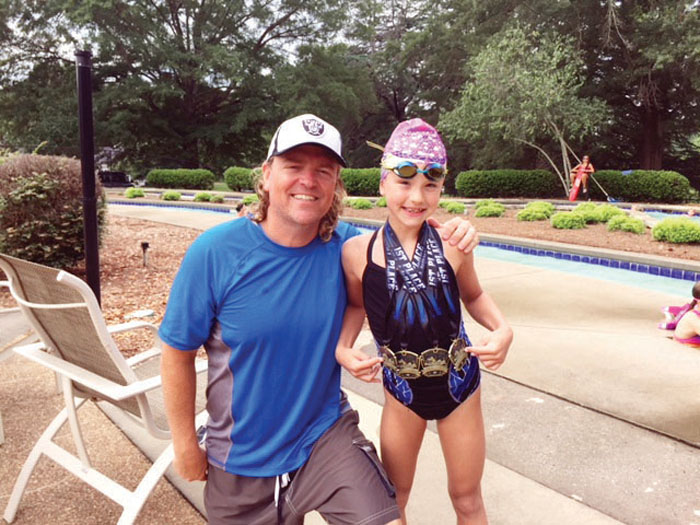 Could Skyler Zuleger be our next Kathleen Baker? Baker medaled at the last Olympics and is from Forsyth County. Time will tell, but until then, Zuleger is collecting her fair share of gold medal bling. At last week’s City Meet held at Bolton Pool, Zuleger won the High Point Award for her age group. The High Point Award is solely based on individual events. Zuleger swam the 100 Individual Medley, 25 breaststroke, 25 butterfly and 25 backstroke. The fast fish won every event, giving Zuleger all gold medals. What makes her wins so unique, is the fact that Zuleger is only seven. She was competing against eight-year-olds, some who are turning nine later this summer.

“For someone to win who is on the lower end of her age group is unheard of,” says Coach Ryan Michel. “I can’t remember a seven-year-old sweeping four events like that. It is definitely a special day.”

With a smile, young Zuleger says, “I felt really excited because everyone was happy for me.” The seven-year-old swimmer adds, “I enjoy that I get to be on this team. I enjoy being there.”

Zuleger swims for Bermuda Run Country Club. Last year at the Championship Meet, she set a record in the 25 freestyle, also giving her a gold.

“When she gets her mind set on something,” says Courtney, Zuleger’s mother, “she is one determined little girl.”

“She sets goals and tries to reach them,” notes Zuleger’s father, Chad. “She is always motivated to make herself better, in my opinion. It’s exciting to see.”

Coach Michel echoes the same sentiments about the up-and-coming swimmer.

“She’s been amazing at every age group,” says Coach Michel. “I talked Courtney and Chad into her swimming at four-years-old. Ever since her first practice, she’s been extremely coachable and a good listener.”

Starting last summer, Zuleger began swimming with eleven-year-olds during practice in order to get in extra laps.

Zuleger’s dad helps coach at Bermuda Run. As a former swimmer at West Forsyth High School, Chad holds the record for the 100-yard breaststroke at West.

“When I see her excel, it’s great to see. I remember what it’s like setting goals in swimming,” he says. “It is fun to see both of my children get into it.”

Coach Michel acknowledges why Zuleger is different than other swimmers.

“In swimming, it is really unusual to excel at many strokes. At the high school level, the people I work with specialize in freestyle or back stroke but she does well in every stroke,” the coach points out. “But what’s most important is that she keeps loving the sport.”