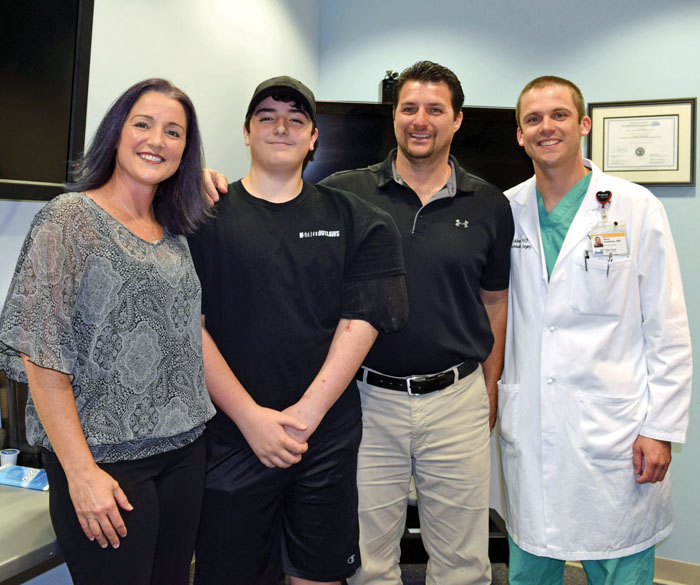 Tyler Hughes, second from left, with his parents Crystal and Scott. At right is Dr. Matthew Goldman, the surgeon who reattached Tyler’s left arm after it was severed in a utility vehicle accident.

It’s the story of a terrible accident, a life-changing event that could certainly have ended tragically, but what Crystal Hughes emphasizes as she talks about that day are “the miracles that were tripping all over themselves.”

It was this past January, a day when a dusting of snow had been predicted, but instead some eight inches had fallen overnight. It was a day for being outside and enjoying the winter weather, and Crystal’s son, Tyler, was riding on the family’s Yamaha Rhino, a utility terrain vehicle.

“I was on our golf cart with my younger son when I heard screaming and someone shouting that Tyler had broken his arm,” the Clemmons mother recalls. “I rushed over and, in a moment, realized it was something much more serious.”

Crystal said there was no blood anywhere to be seen, but by the position of Tyler’s arm on the ground and the way his shoulder was pointing, she knew something wasn’t right. She tried to shield his view and that of others as to exactly what had happened. “I just kept telling him it was a broken arm while a neighbor called 911.”

But Crystal also did something else “because she’d seen it on television.” She took off the scarf she was wearing and tied it around the upper part of Tyler’s arm as a tourniquet. She couldn’t see the extent of the injury because of his coat, but rather did it instinctively. As a result, she saved his live.

Emergency personnel were close by having just answered another call. There was no transport necessary in that case, and they were able to respond quickly to the scene. One of the firemen assessed the situation and realized additional help was needed. “This isn’t the situation we were called out for,” Crystal remembers him saying. “Get the helicopter here.”

The quick response of EMS and the close proximity of Air Care One were two of those miracles. The helicopter was able to land in a nearby neighborhood and the 13-year old was flown to Wake Forest Baptist Medical Center in short order.

Crystal said she wasn’t able to go with Tyler and a neighbor drove her to the hospital. Her husband, Scott, who was at work, was called and met them there. Scott actually arrived first. “I didn’t realize he was being flown in by helicopter and had been watching outside the emergency department for an ambulance, he said.

What Scott learned when joined the family was that Tyler had been on the Rhino when he attempted to take a curve too fast. In overcorrecting, the vehicle turned onto its side and the roll bar landed on his left arm, severing it.

“It didn’t hurt,” Tyler explained. “My arm was numb, but I knew it wasn’t just broken.”  The fact that the weather was cold and Tyler was lying on ice after the accident, was another miracle of sorts.

At the hospital in the emergency room the heavy coat Tyler had been wearing was removed. “That’s when they realized how much blood he had lost,” Crystal said. “The coat is a heavy denim with thick fleece inside and all the blood was in that coat.”

Without that tourniquet applied above the wound, Tyler would have continued to bleed and the blood loss could have been fatal.

Tyler’s surgeon, Dr. Matthew Goldman, assistant professor of vascular surgery, explained that once the young man was in the operating room, doctors worked to stop the bleeding and then assessed the situation. “Here at the Medical Center we have a second-to-none hand surgical team and two of the surgeons came in to examine the arm and see what was there and what wasn’t. We, as the vascular surgeons, looked at the damage to the nerves, arteries and veins to see if they could be repaired. The arteries were transected, but we felt we could repair those. We asked ourselves all the important questions and the answer to all of them was yes. There seemed to be a case for a good outcome for reattaching the arm.”

Asked if it was rare for an injury this traumatic to be a candidate for reattachment, Goldman said it was, but that there were a number of factors that made this case possible. One of those was how quickly Tyler arrived at the hospital after the accident. “He was in surgery within two of hours of the accident and we were able to restore blood flow within that time frame. Because his mother had applied the tourniquet, he came in to us in relatively stable condition. Normally after an accident like this, the patient isn’t stable and you want to get them out of surgery as quickly as possible. Being stable meant we had time to assess and deal with all of the work that had to be done.”

The surgery took nine and a half hours, and during that time, Tyler’s family and friends waited for news.

“It was scary,” Tyler’s father remembers, his eyes filling with tears as he talks about the long wait. “When I got the call about the accident, I didn’t know how bad it was, and then to hear what had happened was hard.”

Tyler and his parents talked about the long journey since that day in January, the six subsequent surgeries, the rehabilitation and the fact that another surgery is already scheduled.

“After the first surgery, the doctors asked Tyler if he could move his fingers and he did,” Crystal said. This was very encouraging, but then swelling set in and it was a long time before he moved them again.

Right now, Tyler’s rehab has been put on hold while he fights off a bone infection. “He has had the skin graft and they were going to do the bone graft but found the infection,” his mother explained. “All of the hardware — the plates and screws — that were holding the bone in place had to be removed to allow for the infection to be treated. When that’s done, he will have the next surgery.”

The injury was to Tyler’s left arm and he is right-handed, another piece of good luck because he was able to continue his school work at home for the third quarter of the year, and actually get back into the classroom for some of the fourth quarter.

“I was able to finish the eighth grade and will be starting high school in the fall,” Tyler said. “It was good to be back with friends.”

Asked what he’s been doing while recouping, he said playing with his Xbox. “The doctors told me to do that with my left hand. Using it will help.” The trauma was like in a stroke, Dr. Goldman explained, in that the nerves must be retrained.

As for his progress, Tyler and his parents are encouraged. He demonstrated how far he’s come by using his right hand to open up his left and then made a fist. “He has a pretty good grip,” Scott said.

“I can open a car door now,” Tyler added.

Dr. Goldman, said that the credit for saving Tyler’s life goes to his mother for her quick action in applying the tourniquet, but that it’s always rewarding when you have a team of trauma doctors and a procedure for dealing with this type of injury and everything works the way it is supposed to.

How the healing progresses and to what extend Tyler will regain use of the arm isn’t a question Goldman could answer. “That isn’t something we can know at this point. I don’t know if it will ever be 100 percent. Blood flow is good, we know that, and the remaining question is the nerves. That, unfortunately takes months, even years to see what functions return. The goal is to give the patient functionality in the limb, and we’ve given Tyler a good shot at that. But only time will tell.”

In the meantime, Tyler has a positive outlook, and his parents are grateful for what Dr. Goldman and the other surgeons at Wake Forest Baptist Medical Center were able to accomplish. They know the journey ahead will be a long one with many challenges, but for now this family is grateful for the miracles they experienced and the hope Tyler’s been given for the future.

“We are so lucky and feel very blessed,” Crystal said.