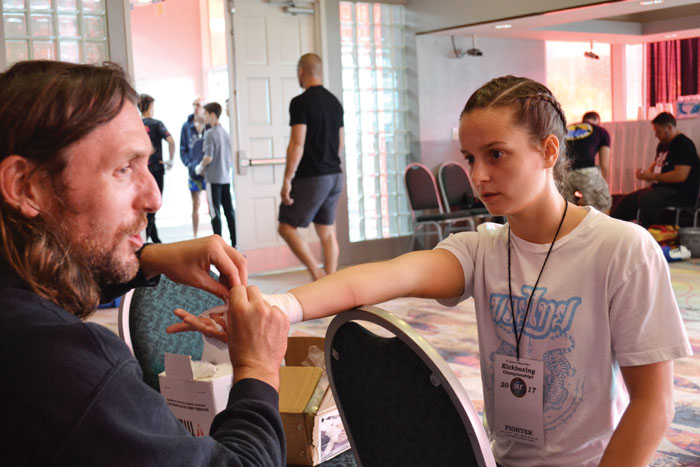 Gillian McBride gets her hands taped before a fight by her coach, Chris Clodfelter

Gillian McBride spends her summer days practicing flutter and dolphin kicks in the pool as a member of the swimming team at Clemmons West.

At night, the 15-year old rising junior at West Forsyth trades in her swimsuit for headgear and gloves and engages in different kinds of kicks — round kicks, sidekicks and back kicks.

McBride, who will turn 16 in August, has been learning the martial art of Muay Thai for almost three years now. Muay Thai originated in Thailand and is a combat sport that uses stand-up striking and is known as the “art of eight limbs.”

How did a teenager who spent her younger years playing tennis, softball and basketball become so interested in such a potentially violent endeavor?

“My dad was showing me a video of Ronda Rousey (former MMA fighter) during one of her fights and she had her opponent in an armbar,” McBride said. “My first thought was that it was kind of gross that women would want to do something like that. After I thought about it a little more, I thought it was really cool that there was a sport like that available to women and I wanted to give it a shot.”

McBride and her parents did some research and learned that Muay Thai was the closest thing to MMA (Mixed Martial Arts) and found a local gym, Eight Point Muay Thai, in downtown Winston-Salem, where she could train.

“My first training session happened when I was 13” McBride said. “My head coach, Chris Clodfelter and my training partner, Aracely Valenzuela, told us how everything was going to go. The first month or so, I worked a lot on the proper stance and then the first two punches, the jab and the cross. I was hooked after my first night. I didn’t think I would ever really compete when I started, I just thought it was going to be a fun sport to do.”

McBride, with some encouragement from Valenzuela, has since started competing. Her first event was last November in Myrtle Beach, South Carolina.

“She (Valenzuela) really started to advance my training and pushed me to start competing,” McBride said. “Seeing her compete was really inspiring to me

McBride fights in the junior division (14-18 years old,  114-121-pound limit) where there are three rounds that last 90 seconds each. Competitors face off in a ring, with the goal being to score more points than your opponent or to knock them out.

Her first match didn’t go quite as well as she expected.

“It was terrifying,” McBride recalled. “Kind of like throwing a puppy out to a pack of dogs. Because of my age, most people I will fight have more experience than me. And my first fight, I had to fight a girl who was also trained in Tae Kwon Do and I wasn’t really prepared for all her tools. I felt pretty helpless. I wasn’t sure how to use my offense or defense because none of it was working early on. Even though I lost, it didn’t discourage me. I learned a lot.”

McBride has since competed in events in New York and recently was in Newark, Delaware, for the World Kickboxing Association National Tournament.

“The top two in each bracket qualified for the World Kickboxing Championships next summer in Thailand,” McBride said. “I’m still waiting to hear from the commissioner about whether or not I’ll be going. In that fight, my opponent was a lot taller than me and she used her length to her advantage, but I felt like I did a lot better in that one than I had before.”

McBride said that her parents still get somewhat uneasy when they watch her fight.

“I think it freaks them out to see me, especially the first time I fought,” she said. “They get more nervous than me before fights. I think they will eventually learn to relax a little bit.”

McBride said that she gets kicked in the face, elbowed and kneed on a regular basis. Nosebleeds and cuts are common.

“I have eaten my share of punches and caught a couple of head kicks, but I usually have my hands up,” McBride said. “The worst injury I’ve had so far was a nose bleed. And one time I got kicked in the shin so hard I got a deep bone bruise.”

McBride said that most of her friends are aware that she competes in her sport of choice, but that the sport itself may be a bit foreign to them.

“I don’t go around boasting about it because it’s so different,” she said. “I don’t want to scare them or weird them out about it. I’m not in the sport to just beat up random people on purpose. I just explain to them that it’s a normal sport for me, like basketball or soccer would be for them.”