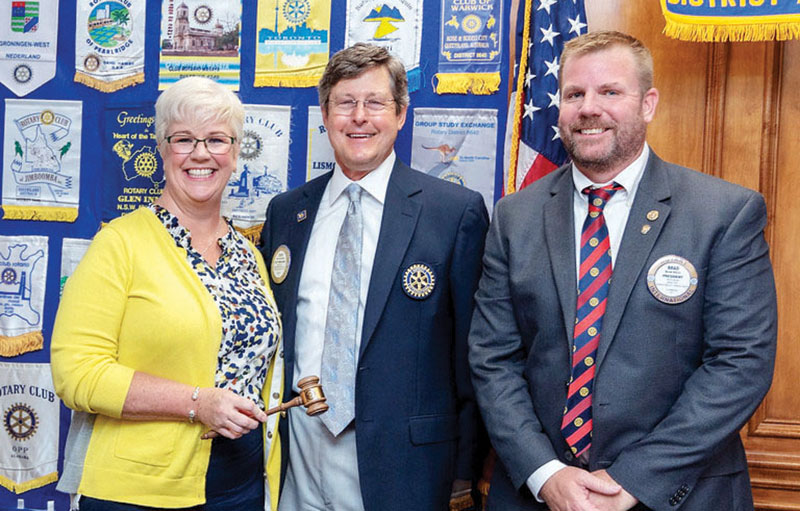 For Susan Joy, becoming a member of the Rotary Club of Clemmons was one of the best decisions she’s ever made.

Joy, who was recently installed as the 2018-19 president of the board, joined the Rotary Club almost 12 years ago after being invited to a meeting.

“What I found was a community-minded group of people who were very giving of their time and talents to help improve their community, and ultimately made some of the best friends I have known,” she said.  “​I honed leadership skills chairing both fundraising and service projects and am humbled by the impact this group of people have had.”

Joy, who resides in Bermuda Run but has lived most of her life in Clemmons and works as HR manager/training, development and employee relations for the YMCA of Northwest N.C., is most proud about the local Rotary Club dedicating more than 1,200 hours of community service in the past year along with raising and donating $85,000, including these projects:

• Refurbishment of the amphitheater ​near Clemmons Elementary.

• Hosted the Totally Outstanding Awesome Stroll through Tanglewood (TOAST) in November, which was a major fundraiser and a walk through the light display before it was open to the public.

• Wrote and distributed 400 holiday cards to seniors and shut-ins.

• Hand-In-Hand, which is a signature service project and a partnership between Clemmons Rotary, the Jerry Long Family YMCA and Agape Faith Church — where about 300 disadvantaged children are brought in for a meal, Christmas program and then a trip to the light display at Tanglewood.

• Hosted a food drive in February for Clemmons Food Pantry.

• Participated in the Salvation Army’s “Designs to Fight Hunger” project at Hanes Mall.

On June 20, the Rotary Club of Clemmons held its Annual Awards and Installation event at the Village Inn Event Center, which was presided over by outgoing President Brad Davis.

The board of directors for 2018-19 was installed. Those officers are:

Here is the list of awards presented and the recipient:

The Rotary Club of Clemmons, which was founded in 1993 to work on projects to serve the community, regularly meets at the Village Inn on Wednesday at 7 a.m. for breakfast. Meetings are open to the public, and potential new members are invited to come.