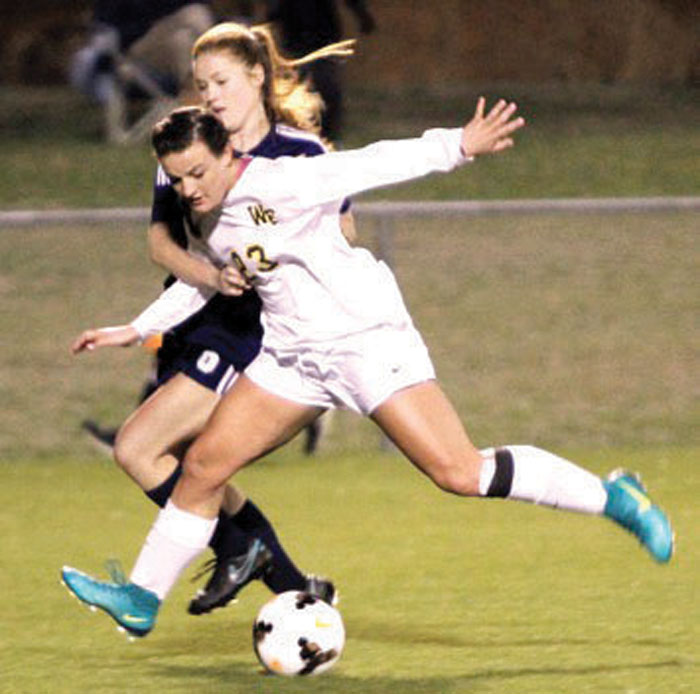 Brooklyn Berry, the 2018 female athlete of the year at West, will represent the Titans in the girls soccer game at 6:30 p.m. on Tuesday, July 17, at MacPherson Stadium, home of the Carolina Dynamo.

Three athletes from the Class of 2018 will get one more chance to represent West Forsyth for a final time next week in the East-West All-Star games in Greensboro.

Brooklyn Berry, the 2018 female athlete of the year at West, will represent the Titans in the girls soccer game at 6:30 p.m. on Tuesday, July 17, at MacPherson Stadium, home of the Carolina Dynamo.

Skylar Curran, the Titans’ 2017 female athlete of the year, will play in the girls basketball game at the Greensboro Coliseum on Monday, July 16, at 6:30 p.m.

And football player Chauncey Hill will play for the West team on Wednesday, July 18, at Jamieson Stadium on the campus of Greensboro Grimsley.

The games are sponsored by the North Carolina Coaches Association and have been ongoing since 1949.

For Hill, who only played at West for his senior season, learning he made the team was a big surprise.

“I was so excited because I wasn��t even really aware there was an East-West game,” Hill said. “Once I looked it up and saw about the history of it, it made me really proud to know that I will get to be a part of it and represent my school. Coach (Snow) had told me I was nominated for it, but I don’t think it registered with me what it was all about. My dad kept mentioning it to me too, and then I found out I made it. It will be fun to play for my school one more time.”

Hill, a 6-3, 320-pound offensive lineman, hopes his appearance in the game will lead to broader recruiting interest. He is currently enrolled and will play football at Louisburg College the next two years and is already taking classes. He will head to Greensboro on July 13 to begin practicing with his all-star game teammates.

“I think it will be like any other Friday night, but it just won’t be that I’m playing with my teammates,” Hill said. “I’ll have a smile on my face the whole time, kind of like a relief that I’m officially done with high school, but still honored to be a part of this game.”

For Curran, who will play for High Point, she looks forward to playing one last time in a high school game and what lies ahead for her in college.

“It’s a big deal to be playing in this game,” Curran said. “I played in the North-South (game, which was held in Wilmington) in the spring and all the things we got to do around the game were really neat. We got to visit a children’s hospital and I hope we will be able to do some things like that, because I really enjoy that. It’s really exciting and an honor to be one of the people that was chosen to play. I’m happy I get to represent West Forsyth one more time, because playing there the last four years have been the most fun of my life. It will be exciting to go out there one more time and represent them one more time.”

Berry, who will play soccer at UNC Wilmington, ended her storied career at West as the school’s career leader in goals with 149.

“It will be the last time I get to represent West Forsyth ever, and that’s a little bittersweet,” Berry said. “It’s always a big deal to get chosen for anything. I’ll be playing alongside people I’ve known for a long time or played against in club ball for a long time, too. Some of them are going to play in college and some aren’t, so it will be cool to have us all together one last time. Emotionally, it won’t be quite as heartbreaking as losing in the playoffs this year because most of my teammates at West I played with for four years and in some cases, a lot longer. But at the same time, it will be my last high school game. It is the final hurrah and it’s been a lot of fun.”