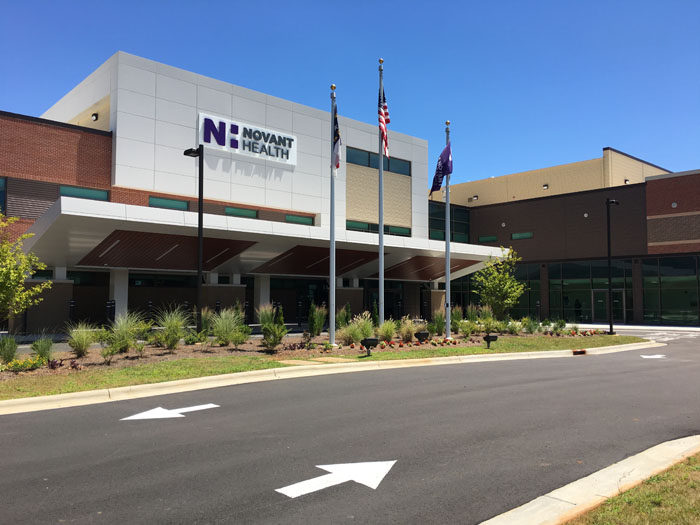 When Kathy Teufert retired to Clemmons from Minnesota last year, she did so in large part because of the warm weather, the friendly people and the Triad’s cultural opportunities. And as a former newborn and pediatric nurse practitioner, she was also impressed by the top-quality medical care available just minutes from her new home. But she never expected to learn so quickly how great that care was until she needed shoulder surgery just months after relocating.

“We checked every box. I knew everything that was going to happen. It was an amazing level of attention to detail,” Teufert said following her February surgery at Novant Health Clemmons Medical Center. “Everyone was concerned about how they could make this experience better for me, what they could do for me.”

Teufert isn’t alone in her praise. According to Press Ganey, one of the nation’s leading health care consulting groups, which routinely surveys patients on their hospital experiences, 91 percent of patients surveyed said they would definitely recommend Clemmons Medical Center to their family and friends. What’s more, 99 percent of Clemmons Medical Center team members surveyed said they would recommend the hospital as a good place to work.

Clemmons Medical Center opened five years ago and just marked the six-month anniversary of a major expansion. A groundbreaking ceremony for a third phase of construction, with an estimated construction cost of $20 million to $25 million, will be held this summer.

But even as the medical center has grown and expanded, its leaders and team members have kept a focus on providing the community with top-quality care close to home.

The care she needed

That’s exactly what Teufert said she experienced. She was one of the more than 2,000 patients who underwent a surgical procedure at Clemmons Medical Center within the last year.

Teufert, 63, had only lived in North Carolina for a few months when she tripped and wrenched her right shoulder. While it hurt, she didn’t think the injury was serious; instead she chalked it up to a bad sprain. But six weeks later, she was still in pain. That’s when she made an appointment with Dr. Richard Haigler, an orthopedic surgeon with Novant Health Orthopedics & Sports Medicine — Clemmons.

“Dr. Haigler ordered an MRI, and I really thought he was going to tell me that I had arthritis,” Teufert recalled. “Instead, he told me that I had torn three of the four tendons off my rotator cuff and that, in order to fix it, he would have to surgically rebuild my shoulder by performing a reverse total shoulder replacement. It was a real surprise.”

This type of surgery requires the arm to be immobilized for at least a month, which meant no lifting or driving. Complicating matters further was the fact that Teufert was still new to town. Not only did she lack a support system to care for her after the surgery, she didn’t have any experience with Clemmons Medical Center, where Haigler would operate.

“The last time I had surgery, I picked the hospital, I picked the doctor and I picked the nurse anesthetist,” Teufert said. “I had the insider’s track because I had worked at that hospital for 35 years. But then I moved to North Carolina, and I knew nobody. So I really had to do my research and ask a lot of questions to be sure I felt comfortable.”

And Teufert said that on the day of her surgery in February, she felt completely at ease. She had already been to Clemmons Medical Center a few weeks earlier to complete her presurgical visit and make sure her medical record was up-to-date. She’d also had the opportunity to meet with a nurse navigator, who helped her figure out how she’d manage things like transportation after surgery. And she felt reassured by the hospital’s continual focus on safety and infection prevention.

Just 24 hours after surgery, Teufert was discharged from Clemmons Medical Center. While she appreciated the large, clean patient room and caring nurses, she was excited to get home to her own space. Within hours, she had her first visitor.

“My occupational therapist actually visited me twice the day of discharge,” Teufert said. “The first time was to teach me how to put my harness and clothing on, and then he returned a few hours later to make sure I could really do it alone. I appreciated that, because it felt like the care was really tailored to me and my specific needs.”

Teufert also enjoyed physical therapy visits at home. And when it was time for her first post-surgical checkup with Haigler, a volunteer from a local church showed up to drive her, a service arranged by the nurse navigator since Teufert still wasn’t allowed to drive.

“I’m not someone who usually asks for help. But people have been really nice to me, checking in on me and telling me to call them if I need anything,” Teufert said. “Given the fact that I worked in an inpatient hospital setting for 41 years, you have to work really hard to impress me. And the people at Clemmons Medical Center impressed me. They are really excellent.”

More than just a good place to work

That’s exactly what Wendy Strain likes to hear. As the patient access supervisor for Clemmons Medical Center, Strain and her team registers every patient who walks through the medical center’s doors. Although she’s only been at Clemmons Medical Center for about 18 months, Strain has spent more than a decade with Novant Health. And she was excited about the opportunity to put her talents to work in Clemmons.

One of the most refreshing aspects, according to Strain, is the can-do attitude shared by everyone who works at Clemmons Medical Center.

“We all work as a team,” Strain said. “It’s not your department or my department – it’s Novant Health Clemmons Medical Center. And whatever we can do to help anybody – whether its patients, families or our co-workers – we all just pitch in and do it. Because we really want to make this hospital better. And while it’s nice to hear that 91 percent of patients would recommend us, we want it to be 100 percent. And we won’t stop working until it is.”

That dedication to the community is one of the reasons why Ginny Chase, director of the Lewisville-Clemmons Chamber of Commerce, believes Clemmons Medical Center has been so successful since its opening in 2013.

The community has also supported the growth of the medical center. The original 44,000 square-foot facility was recently expanded to add 36 inpatient beds, three operating rooms, a cafeteria and pharmacy. A phase 3 expansion, which is set to open in August 2019, will include an outpatient surgery center, offices for specialists and ancillary support services.