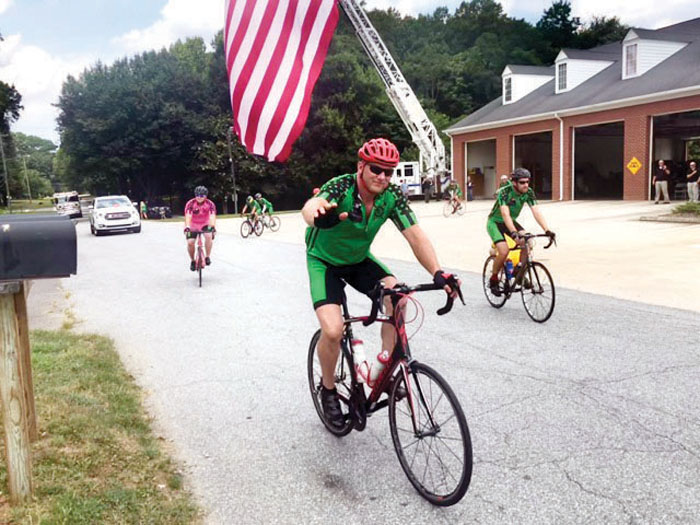 A blue wreath was placed outside of Tanglewood Park in honor of Forsyth County Deputy Sheriff John Isenhour last week. Isenhour died in 2016 while he was on duty at Tanglewood. A cycling group, called the Carolina Brotherhood, rode their bikes to Clemmons to remember Deputy Isenhour. The Carolina Brotherhood, comprised of firefighters, police officers and emergency personnel from both North Carolina and South Carolina, were greeted by Sheriff William T. Schatzman, who was also at Tanglewood for the memorial event. Schatzman thanked the bike riders for coming to pay their respects to fallen Deputy Isenhour and to honor his commitment to public service.

The bikers also stopped by the Clemmons Fire Department for a quick reprieve. Clemmons Fire Chief Jerry Brooks welcomed the cyclists with food, drinks and a lot of encouragement. “We are all one brotherhood,” said Chief Brooks. “It is an honor and privilege to be able to support and be a part of the Carolina Brotherhood.” The cycling group, established in 2012, has made it their mission to ride their bikes through the towns of those who have fallen in the line of duty in North and South Carolina. This year, they honored 17 public safety heroes: 13 firefighters, four law enforcement officers and one police K9.

“I brought my sons with me. So, they’ve always known if anything ever happened to me, this is what they have,” says bicycle rider, Cindy Zimmerman. Zimmerman, who is retired from the Charlotte Fire Department, is one of this year’s 30 bicycle riders volunteering for the Carolina Brotherhood. Her sons have volunteered with the program for years now, she says. Her youngest son started volunteering before he could even drive a car.

“While the ride is grueling in the heat, it is not about us; it is about those who have fallen,” says Drew Lazarus, Captain of the Charlotte Fire Department and Board Member of the Carolina Brotherhood. “Each route changes annually because we go to the families who are affected.” Lazarus said awareness of the Carolina Brotherhood and its mission has continued to grow. It is not uncommon for those with a loved one who has died while on duty to come out, year after year, to show their support of the brotherhood and to pay their respects with them. It can be an emotional time, particularly when talking with those who have been recently widowed. “It’s extremely humbling and often times emotional,” Lazarus said. “They tell us their story and if they get emotional, 99 percent of the time we get emotional with them.”

Zimmerman, who has an old knee injury that can flare up on the rides, doesn’t seem as bothered by her physical ailment as much as the empathetic pain she feels for the families that are left behind to grieve their loved ones and to shoulder their troubles without them. When Zimmerman stopped at the Clemmons Fire Department with her cycling group, she got her knee re-taped and was ready to hop back on her bike. However, it is the thought of others that moved her to tears. “We all —these guys and gals — we all help each other,” Zimmerman says. She pauses as she wipes away a tear. “I wish more people knew the help that comes from their donations. It helps widows put their kids through college, make house payments.”

Captain Lazarus adds, “There is a saying in public safety: ‘Never Forget.’ But it is more than that. It is the action that follows. Being involved in an organization like this, I know the support and team that would be there for my wife and two sons if anything ever happened to me. They would be in good hands.”

The Carolina Brotherhood documents every stop with photos. Real time updates can be seen on Twitter @CarolinaBhood and on Facebook. For more information, go to https://carolinaBrotherhood.com