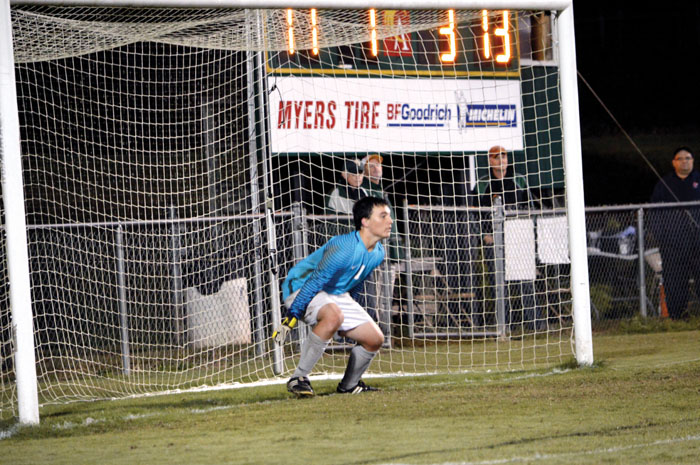 West Forsyth’s Dillon Donahue got one last chance to shine when he put on his goalie jersey for the final time of his competitive soccer career in Tuesday night’s East-West All-Star soccer game in Greensboro.

Donahue played his final game for the Titans last November in a heartbreaking 1-0 loss to Charlotte Providence in the second round of the NCHSAA 4-A state playoffs, but the postseason accolades have been numerous since.

He was the Defensive Player of the Year in the Central Piedmont 4A Conference and was named to the All-District team in Region 7 as well as the All-State team by the North Carolina Soccer Coaches Association. And when Coach Jeffrey Williams delivered the news about making the roster for the West team in the All-Star game, Donahue said he was honored.

“It’s nice to be recognized for your play by other coaches,” Donahue said. “It was a huge honor to find out I had made the team, but it will be a little bittersweet knowing it’s the last game of my career.”

Donahue, who was a three-year starter at West, will not be playing soccer in college. He decided that his senior season was going to be the end of the line as far as his competitive playing career, but he plans to major in math and minor in coaching/sports science as a student at UNC Chapel Hill.

“I’m sure I will play club or intramural, but it won’t be the same as playing with my friends like I’ve been doing,” Donahue said. “That’s probably what I’ll miss the most.”

You might say that Donahue was destined to become a goalie. His father, Rob, played the position at Wake Forest. His older brother, Sean, was a former keeper at West Forsyth who now is a graduate assistant coach at Jacksonville State University.

Despite the lineage, Donahue said that he was never pushed into playing the position.

“I actually didn’t really enjoy soccer all that much when I was younger,” Donahue said. “I played a lot of baseball growing up. When I was playing soccer, I was playing other positions. I don’t think I started playing goalie until I was seven or eight and my coaches thought I did a pretty good job playing there, so I stuck with it. My dad started giving me pointers about the position once I started playing it, but it’s never as fun to get pointers from your dad as it is getting them from other people. Playing goalie is one of the most important positions on the field. Your job is to stop the other team from scoring and if they don’t, your team has a better chance to win the game. Sometimes, there is lots of pressure, but that’s a good thing. It tends to bring out the best in people.”

Donahue’s presence as the last line of defense for the Titans was a blessing for Williams.

After spending his freshman season as the starting keeper for the junior varsity team, Donahue became entrenched as a starter as a sophomore.

“He was a starry-eyed kid trying to hold his own his first year with us on varsity whose confidence really grew as he got older and more experienced,” Williams said. “He became more of a leader for us on and off the field during his time with the program. He took more command of the position as a junior and senior and was a staple we knew we could trust in the back.”

Donahue also had Williams as a math teacher for two years and two developed a close connection.

“I was the vice president of the Math Honor Society and he (Williams) was our advisor,” Donahue said. “He was great in the classroom, but if I ever forgot to do my homework, I usually paid for it more when we practiced that day.”

As for Donahue’s grand finale Tuesday night, he said he only had one thing in mind.

“I’m going to go out there and enjoy myself,” he said. “I’ll do my best, have a lot of fun, and try not to give up any goals. That would be the best way to end things.”