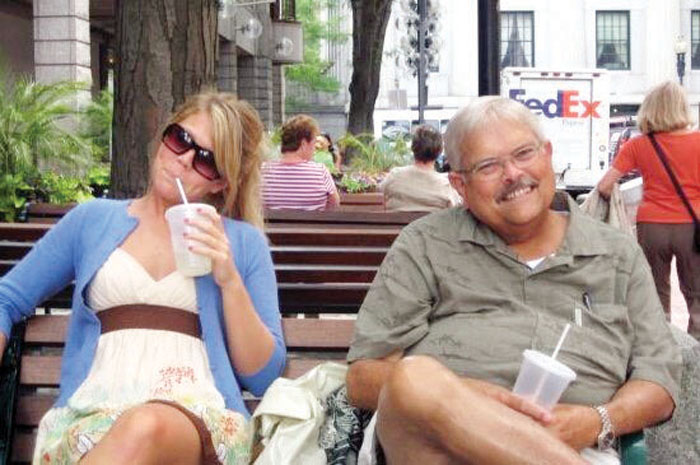 Growing up in the small town of Ocean Isle Beach, Christina Chavka found herself drawn to sports. She was quite the avid athlete but really shined in softball. Her dad traveled with her to nearly all the games. In fifth grade, Christina and her sister, Alex, were told their dad had been diagnosed with a disease that required medicine, but that it was no big deal. However, it was anything but a mundane ordeal. Christina’s parents were trying to do what many parents do — shield their children from experiencing any undue worry and emotional suffering while letting them continue enjoying their youth as carefree possible for as long as they could. “He was diagnosed with multiple myeloma — cancer — when I was in fifth grade,” says Christina about her father. “It covered 80 percent of his body when they discovered it. He was told he would maybe have four years to live, but we never knew that until later.”

Christina’s father never let his disease slow him down. Instead, he was at every ball game. He didn’t miss any function at school. “If anyone were to meet him, no one would have known he was sick because of his outlook on everything and his positive mentality,” says Christina. “I think that has made me who I am today.” For years, Christina says she had no idea how bad her father’s cancer was. He, nor her mother, Linda, let on about the seriousness of the disease. Her father’s perspective and priorities were clear. He wanted to be there for his girls. “He was living for us and my mom,” reflects Christina. “We weren’t around sulking. They tried to keep everything upbeat and positive. We didn’t know what was really going on until we were old enough to understand it.”

Upon high school graduation, Christina received a scholarship for softball to Augusta State University in Georgia. While she played her freshman year of college, she decided to come back to North Carolina. “I’m glad I did it, but it wasn’t for me. I came back to the beach to be near my family.” Christina transferred her sophomore year to the University of North Carolina at Wilmington. She was back to the ocean area she loved. She was also 45 minutes away from her father. By then, she knew the exact nature of her father’s disease and that his prognosis was not good. “He had treatments in Wilmington, so I got to drive him to the treatments,” remembers Christina. “We didn’t know it at the time, but that ended up being his last year. He was not happy with me at first for coming home and not playing, but then we got to spend a lot of time together.”

In 2008, when Christina was 20, her father passed away. He had seen both his girls off to college. They were thriving. In looking back, it is amazing to consider how her father defied the odds he had been given. He was told he would live for four years, max. Instead, he lived for twelve more. He was a walking miracle. “It didn’t really hit me until he passed because he was always so upbeat and positive. He never wanted anyone to feel bad for him. He was a walking miracle at the time. We were extremely close. We talked about it, but never got too deep into things because I don’t think he wanted it to get to that point.”

After her father’s death, Christina says she, her sister, and mom went about things as best as possible. Christina finished up college, as did her sister Alex. After graduation, Christina taught elementary school for a couple of years in Wilmington. Then, she met a boy at a graduation party in Winston-Salem. The boy wanted to take Christina on a date. There was just one problem. She did not live in Winston. “I knew he was a good guy when he drove all the way from Winston to Wilmington to take me out on our first date.” Christina eventually moved to Winston to be with Seth Chavka. When the two married, Christina’s mom walked her down the aisle. Her brother-in-law, who had met and had a close relationship with Christina’s father, filled in for him when it came time for the father-daughter dance at the reception. Christina says, while her dad was not there physically, she felt his presence. “I had his initials wrapped around my bouquet. I had an owl charm. He loved owls. He was there.”

Today, Christina lives her life according to what she enjoys. She realizes life is short and time is meant to be spent wisely. “Everything that happened changed my outlook on a lot of things and I appreciate things more. Just seeing him go through what he did, he was able to fight back more than most because of his outlook on life.”

Originally, when Christina moved to Winston, she worked as an elementary teacher. After a while, she decided another change was in order. Rather than continuing on in a job she was losing enthusiasm for, Christina decided to try something a little different. She became an instructor and assistant manager at Pure Barre, where exercise workouts are combined with ballet techniques for strengthening and conditioning. Her new job combines her love of teaching with her athletic skills. “I had a friend who tried to convince me to come to the class for three months.” Once Christina finally relented, the former softball athlete could not get enough. The workout was physically demanding but gentle on her knees, which had suffered years of abuse as a result of the rigorous demands of softball. Her current work schedule is compatible her husband’s, who works as a car engineer for Richard Childress racing on Austin Dillon’s No. 3 car.

Christina says she loves her job because, “People may have a bad day, but when they come in, they can recharge and reset. Just having a little part of that fulfills me. I love seeing people change and feel better. I love the community of the place. It’s a big family here. It is challenging, but there’s no judgement. Everyone can work where they are. It has made me healthier and happier overall.”

It seems natural that Christina has decided to live by the principles her parents set forth — to live as healthy and happy a life as possible. What’s more, Christina is carrying on her father’s legacy of positivity by sharing it with others in our community.