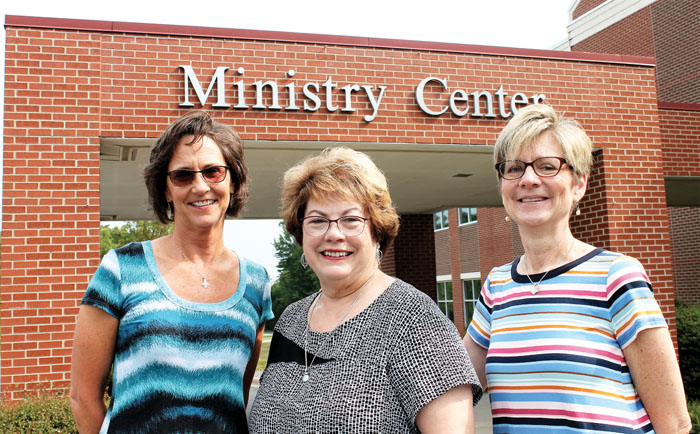 From left, Nancy Bellamy and Ann Roth, facilitators of the GriefShare program; and Kathy Giff, Discipleship coordinator at CUMC.

Kathy Giff’s face lights up as she talks about her new job at Clemmons United Methodist Church.

Earlier this summer, she moved from coordinating the children’s ministries to leading the church’s discipleship programs, where she works to help equip members of the congregation in ministry and mission engagement.

It’s a key position within Clemmons UMC as the church has a long and well-earned reputation in the area for taking a multi-faceted approach to helping the community. That includes equipping its members to identify their passions to serve as ministry volunteers, or “covenant partners.”

Often, church members have an experience or feel a calling that leads them to want to form a ministry or support group within the church. Part of Kathy’s job is to help provide them with the resources to realize their goal.

Clemmons UMC is not unique in its commitment to serve, as most area churches provide a range of services to people in need. A quick check of the church website, though, illustrates a long list of programs and ministries designed to offer not only spiritual and emotional support, but assistance in helping to feed the hungry.

“With CUMC being an equipping church, a lot of these ministries have come about as a result of members finding their passion — their sweet spot — and then acting on it,” she says. “It is not staff-driven, but by the devotion of the covenant partners.

“So, most of these programs and groups are coordinated by the lay people leading them,” says Kathy. “I am here as a point person, but they take the lead. If someone calls with a need, I connect them with the member facilitating the group that can help.”

Parents of Addicted Loved Ones

She cites PAL as an ideal example of what can be created by equipping covenant partners among the congregation.

“We had families in the church with loved ones who were addicted. Their journey called them to find a way to support other families that were going through the same thing.”

PAL is a nationwide Christian, faith-based non-profit dedicated to providing education and support for families battling drug- and alcohol-addiction.

At Clemmons UMC, the group meets for 90 minutes every Wednesday at 7 p.m., even during the summer months.

“That’s because people are in crisis with addiction every week of the year,” says one of the two facilitators at Clemmons UMC, who wished to remain anonymous. “We put a high value on confidentiality as we support each other.”

Each meeting is devoted to an educational program designed to help parents and families cope with their struggles. Following that is a time for sharing among the group.

Deborah Capps says she can often see a burden being lifted from the shoulders of people after they attend a PAL meeting.

“It is amazing to see the joy they feel,” explains Deborah, another PAL facilitator. “To me, the most helpful part was to be among people that understood, because often we feel so isolated. When you are out with people who are not going through the same kind of thing, you don’t feel you can talk to them about it, but when you come in that (PAL) room, you feel safe, you can say anything you want, and people understand.”

The church’s GriefShare support group works in a similar way to PAL and, again, has become available at Clemmons UMC due to the dedication and devotion of covenant partners.

Nancy Bellamy, a resident of Advance, felt a calling to start the GriefShare program at the church last year after having been involved in the program at a Winston-Salem church.

The first of two sessions, each over a 13-week period, began last fall. After taking off for the holidays, GriefShare’s second session started in February. This year’s fall session begins at the end of August, Nancy says.

The group discusses all aspects of their grief, including anger, guilt, and even the prospect of dating again.

“Grief is different for everyone,” Nancy explains. “It is so individualized, but GriefShare gives them comfort in knowing that other people have similar experiences and they are not alone. Our goal is to offer them a safe space and what is said in GriefShare doesn’t leave that space. Hopefully it brings them comfort and they leave feeling more upbeat.”

On Thursday nights at 7 p.m., Clemmons UMC offers a clever and fun ministry called C3, short for Coffee Conversation Community. Aimed squarely at post-millennials (adults in their 20s) and millennials (those in their 30s), C3 is a place to gather, have fun and discussion and experience spiritual growth.

“Pastor Matthew Burton and I had been talking about it for a couple years,” says Pastor Clark, who is the lead facilitator. “We wanted to create a culture that makes them feel welcome in the church and minister to them.”

Last summer, Clemmons UMC began to run ads online about C3 to generate interest. The first meeting in September saw about 15 people attend. Since then, the number of young adults attending has settled into a weekly average of nine or 10, according to Pastor Clark.

C3 is still growing and finding its footing, but it seems to work at Clemmons UMC because it fills a niche that is largely untapped. Most churches have ministries for other age groups, but forget about people in their 20s and 30s, who Pastor Clark says may be experiencing the new stresses of taking on new jobs, having kids and maturing into adulthood. Their busy lives often also don’t allow for church.

Perhaps the most successful lay ministry to spring from the devotion and love of the covenant partners at Clemmons UMC is the Clemmons Food Pantry.

Kathy Giff proudly remembers that the Clemmons Food Pantry began with an idea in a Sunday school class at the church in 2004, before blossoming and becoming one of the pillars of the community. Now independent from the church, but generously supported by it, the non-profit feeds more than 700 households a month.

The food pantry is located at 2585 Old Glory Road, just off Lewisville-Clemmons Road. It is open on Tuesday and Thursday afternoons, plus two hours on Saturday mornings.

Clemmons UMC, though, is just one of many local churches that support the non-profit, says Kathy Kovack, the executive director of the Clemmons Food Pantry.

Forsyth County families who have used the food pantry as a resource to feed their families know that it will give them a healthy variety of fresh foods from which to choose, including breads, meats, vegetables and fruits.

Since its inception, the Clemmons Food Pantry has become one of the largest of its kind in the region and has served more than 175,000 people. Each year over 320,000 pounds of food are distributed to needy individuals and families by the pantry.

On the days it operates, families begin to line up to select needed groceries a couple hours before the doors open, she explains. Food is donated from area grocery stores and restaurants, while much of the fresh fruits and vegetables are purchased by the food pantry from a network of community gardeners. And, of course, the area churches all donate time and money.

But the Clemmons Food Pantry not only provides nutritional sustenance to the needy, but often acts as an emotional support for the volunteers who give of themselves at the facility.

“Our volunteers, like me, tend to find a spiritual need here,” Kathy explains. “There are people who give their time here after having lost their spouses, while others may have just moved into town and don’t know anyone. They come here and develop a network, support one another and build a community within the food pantry.”

Each of the programs supported by Clemmons UMC exists because the church has taken up the task of developing ministries to energize the faith and invigorate its congregation. The results are that the church has lovingly woven itself into the Village of Clemmons and become one of the mainstays of the community.